Torez (Ukrainian: Торез); before 1964 Chistyakovo (Russian: Чистяково, Chystyakove, Ukrainian: Чистякове), is a city of regional significance in Donetsk Oblast of Ukraine. Much of the city's economy relies on mining industries, despite a recent drop in the number of employed miners. In 2012 the city's population was 81,761, down from a 1970 peak of about 120,000. Torez was renamed from Chystyakove in 1964 in honor of French Communist Party leader Maurice Thorez, who died that year. On July 17, 2014, Malaysia Airlines Flight 17 crashed near the city.

The region was settled in 1778 at the confluence of the Sevostyanivka and Orlova Rivers (which drain into the Mius River) by runaway serfs from southern Russia and Ukraine. By 1800 the settlement, with 225 residents, was known as Sloboda Alekseevka after a son of landowner and founder S. Leonov.

By the 1860s the town, now known as Chystyakove for a merchant and owner of a local manor, was a coal-mining hub. In 1875, two mining companies were founded: Chistyakovs'ke (which operated two coal mines) and Oleksiivs'ke, which was renamed Nadiya in 1907. The Chistyakova mines produced 4.7 million pounds of coal in 1909, and 76.8 million pounds by 1916.

In 1924 the Chistyakova mining industry had 142 settlements, with a total of 44,679 residents. Eight years later the settlements became a town, and the town's ten coal-mining quarries were incorporated into the Chistyakovugol Industrial Trust a year after that.

During the 1940s, the town had three administrative districts:

During World War II, Chistyakova was occupied by the German Army from October 31, 1941 to September 2, 1943. In 1964 Chistyakova was renamed Torez in honor of Maurice Thorez, the longtime leader of the French Communist Party who was a coal miner.

In mid-April 2014 pro-Russian separatists captured several towns in Donetsk Oblast,[1][2] including Torez.[3] On July 17 Malaysia Airlines Flight 17, en route to Kuala Lumpur from Amsterdam, was hit by a surface-to-air missile and crashed near Torez; all 298 people aboard were killed.[4]

Torez is a center of the Ukrainian coal industry. Its population is nearly 70,000, or 822 persons per square kilometer.[citation needed] 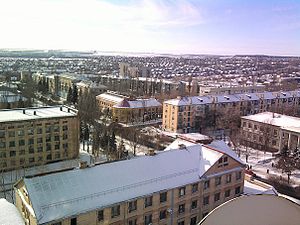 Torez' transport system consists of thirty-one routes served by buses and taxis and links to the cities of Snizhne and Shakhtarsk. The Luhansk-Donetsk Highway runs for nine kilometers through the center of the city. The bus station (vulytsia Popovycha) provides service to Donetsk, Kharkiv and other cities in eastern Ukraine. The city has three major railway stations: Torez (vulytsia Vokzalna), Rozsypne and Pelahiyivka. Two stations serve electric commuter trains: Dronove in Pelahiyivka and Voskresenska in central Torez. 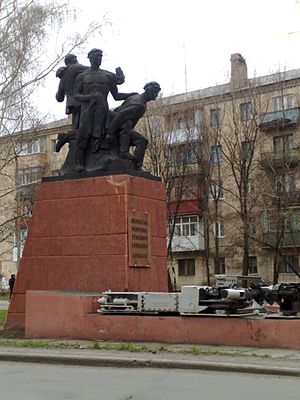 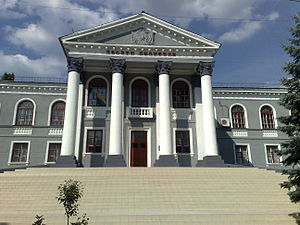 Torez' major company is the state-owned Torez Anthracite, which specializes in coal mining. The company controls a number of mines and production facilities, including the Progress Mine, the Lutugin and Volhynian Mine Administrations and the Torezka factory. Other employers include the Torez electrical and alloy factories, the Vuhleresurs Company's Terra mine, the State Penal Department and the Torez food-testing factory. 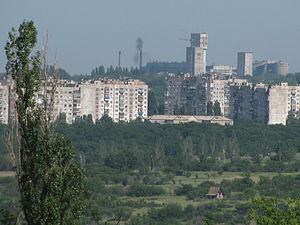 Central Village (Ukrainian: Cелище центральне in southeastern Torez was one of the first settlements in Chistyakova, which became a city in 1932. It has an acting school and two kindergartens.

Shanghai, a small residential area also in southeastern Torez, was built in 1946 by Hungarian prisoners of war and consists of seven-story apartment buildings. In addition to Torez, its city council governs two towns: Pelahiyivka and Rozsypne.