Tormod Haugen (12 May 1945 – 18 October 2008) was a Norwegian writer of children's books and translator.[1] For his "lasting contribution to children's literature" he received the international Hans Christian Andersen Medal in 1990.[2][3] 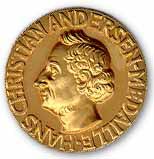 Tormod Haugen grew up in Nybergsund, a small village in Trysil in Hedmark county, Norway. After school graduation at the Hamar Cathedral School in 1965, he attended the University of Oslo. He worked at the Munch Museum 1971–1973. He made his debut as a writer in 1973 with Ikke som i fjor (Not like last year). After his debut he wrote a number of children and young people books, and he became one of the more acclaimed writers of children's literature in Scandinavia.[4]

He was an experimental and innovative writer who picked up elements from Norwegian folk tales and myths as well as from international children's literary traditions. A recurring theme in his writing was the lonely child whose feelings and wishes are disregarded by the adult world, and who as a consequence of this winds up in situations that are outside of his control. His books have been sold to 26 countries and translated into 24 languages. He was also an active translator. Among his works, he translated the Narnia books of C. S. Lewis into the Norwegian language.[5][6]

The biennial Hans Christian Andersen Award conferred by the International Board on Books for Young People is the highest recognition available to a writer or illustrator of children's books. Haugen received the writing award in 1990.[2][3]