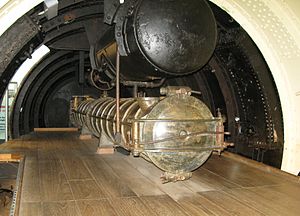 The torpedo tube on HMS Holland 1

A torpedo tube is a cylinder shaped device for launching torpedoes. There are two main types of torpedo tube: underwater tubes fitted to submarines and some surface ships, and deck-mounted units (also referred to as torpedo launchers) installed aboard surface vessels. Deck-mounted torpedo launchers are usually designed for a specific type of torpedo, while submarine torpedo tubes are general-purpose launchers, and are often also capable of deploying mines and cruise missiles. Most modern launchers are standardised on a 12.75-inch (324 mm) diameter for light torpedoes (deck mounted aboard ship) or a 21-inch (533 mm) diameter for heavy torpedoes (underwater tubes), although other sizes of torpedo tube have been used: see Torpedo classes and diameters.

A torpedo tube has a considerable number of interlocks for safety reasons. For example, an interlock prevents the breech door and muzzle door from opening at the same time.

The submarine torpedo launch sequence is, in simplified form: 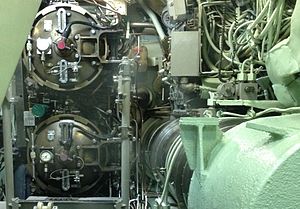 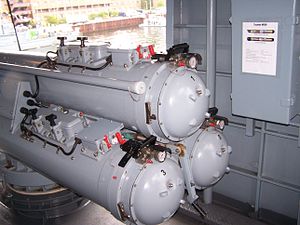 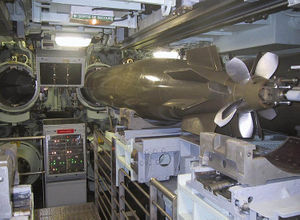 Torpedo tubes of the French SNLE Redoutable: French submarines use pistons to push the torpedo outside the tube, instead of blowing it out with compressed air.

Spare torpedoes are stored behind the tube in racks.

Speed is a desirable feature of a torpedo loading system, but safety is paramount. There are various manual and hydraulic handling systems for loading torpedoes into the tubes. Prior to the Ohio class, US SSBNs utilized manual block and tackle which took about 15 minutes to load a tube. SSNs prior to the Seawolf class used a hydraulic system that was much faster and safer in conditions where the ship needed to maneuver. 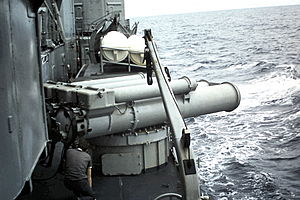 The French destroyer Kersaint prepares to launch a torpedo in 1970

The German Type 212 submarine uses a new development of the water ram expulsion system, which ejects the torpedo with water pressure to avoid acoustic detection.