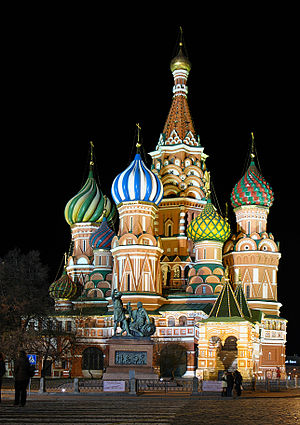 Tourism in Russia has seen rapid growth since the late Soviet times, first inner tourism and then international tourism as well. Rich cultural heritage and great natural variety place Russia among the most popular tourist destinations in the world. The country contains 23 UNESCO World Heritage Sites, while many more are on UNESCO's tentative lists.[1]

Major tourist routes in Russia include a travel around the Golden Ring of ancient cities, cruises on the big rivers including the Volga, and long journeys on the famous Trans-Siberian Railway. Diverse regions and ethnic cultures of Russia offer many different foods and souvenirs, and show a great variety of traditions, including Russian banya, Tatar Sabantuy, or Siberian shamanist rituals. In 2013, Russia was visited by 28.4 million tourists, making it the ninth-most visited country in the world and the seventh-most visited in Europe.[2]

Unless exempt, tourists to Russia are required to purchase a visa, in addition to having a valid passport. Visas cannot be purchased at the border, and once at the border, travellers must present other relevant documents.

The number of arrivals to the territory of Russia by countries:[5]

Excluding intersections Russian-Belarusian border, in the absence of border control. 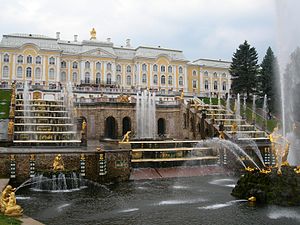 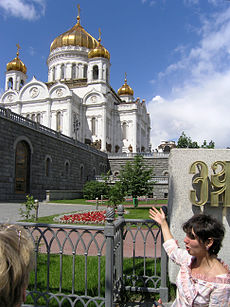 The most popular tourist destinations in Russia are Saint Petersburg (which appeared in the list of top visited cities of Europe in 2010) and Moscow, the current and the former capitals of the country and great cultural centers, recognized as World Cities. Moscow and Saint Petersburg feature such world-renowned museums as Hermitage and Tretyakov Gallery, famous theaters including Bolshoi and Mariinsky, ornate churches such as Saint Basil's Cathedral, Cathedral of Christ the Saviour, Saint Isaac's Cathedral and Church of the Savior on Blood, impressive fortifications such as Moscow Kremlin and Peter and Paul Fortress, beautiful squares such as Red Square and Palace Square, and streets such as Tverskaya and Nevsky Prospect. Rich palaces and parks of extreme beauty are found in the former imperial residences in the suburbs of Moscow (Kolomenskoye, Tsaritsyno) and Saint Petersburg (Peterhof, Strelna, Oranienbaum, Gatchina, Pavlovsk Palace, Tsarskoye Selo). Moscow contains a great variety of impressive Soviet era buildings along with modern skyscrapers, while Saint Petersburg, nicknamed Venice of the North, boasts its classical architecture, many rivers, channels and bridges.

Kazan, the capital of Tatarstan, shows a unique mix of Christian Russian and Muslim Tatar cultures. The city has registered a brand The Third Capital of Russia, though a number of other major Russian cities compete for this status, including Samara, Novosibirsk, Yekaterinburg and Nizhny Novgorod, all being major cultural centers with rich history and prominent architecture. Veliky Novgorod, Pskov, Dmitrov and the cities of Golden Ring (Vladimir, Yaroslavl, Kostroma and others) have at best preserved the architecture and the spirit of ancient and medieval Rus', and also are among the main tourist destinations. Many old fortifications (typically Kremlins), monasteries and churches are scattered throughout Russia, forming its unique cultural landscape both in big cities and in remote areas. 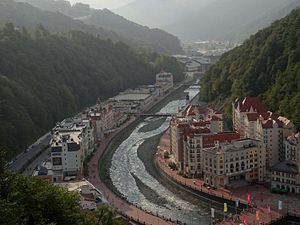 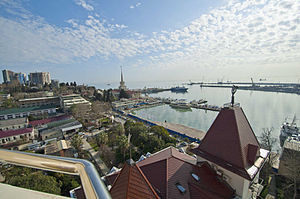 Sochi, a Russian resort town in the Black Sea and home to the 2014 Sochi Olympics

The warm subtropical Black Sea coast of Russia is the site for a number of popular sea resorts, including Crimea and Sochi, known for their beaches and wonderful nature. At the same time Sochi can boast a number of major ski resorts, such as Krasnaya Polyana; the city is the host of 2014 Winter Olympics. The mountains of the Northern Caucasus contain many other popular ski resorts, such as Dombay in Karachay–Cherkessia.

The most famous natural tourist destination in Russia is Lake Baikal, named the Blue Eye of Siberia. This unique lake, oldest and deepest in the world, has crystal-clean waters and is surrounded by taiga-covered mountains.

Other popular natural destinations include Kamchatka with its volcanoes and geysers, Karelia with its many lakes and granite rocks, Altai with its snowy mountains and Tyva with its wild steppes, Republic of Adygea for Fisht Mountain, Chechnya Republic for Lake Kezenoyam and Republic of Karelia for Ruskeala Canyon.[9]

Typical souvenirs include the Matryoshka doll and other handicraft, samovars for water heating, ushanka and papaha warm hats, and fur clothes among other items. Russian vodka and caviar are among the food that attracts foreigners, along with honey, blini, pelmeni, borsch (Ukrainian in origin) and other products and dishes of Russian cuisine.