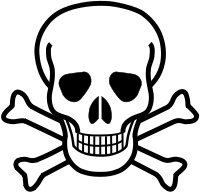 The skull and crossbones is a common symbol for toxicity.

Toxicity is the degree to which a substance can damage an organism.[1] Toxicity can refer to the effect on a whole organism, such as an animal, bacterium, or plant, as well as the effect on a substructure of the organism, such as a cell (cytotoxicity) or an organ such as the liver (hepatotoxicity). By extension, the word may be metaphorically used to describe toxic effects on larger and more complex groups, such as the family unit or society at large.

A central concept of toxicology is that effects are dose-dependent; even water can lead to water intoxication when taken in too high a dose, whereas for even a very toxic substance such as snake venom there is a dose below which there is no detectable toxic effect. Toxicity is species-specific, making cross-species analysis problematic. Newer paradigms and metrics are evolving to bypass animal testing, while maintaining the concept of toxicity endpoints.[2]

There are generally three types of toxic entities; chemical, biological, and physical:

Toxicity can be measured by its effects on the target (organism, organ, tissue or cell). Because individuals typically have different levels of response to the same dose of a toxic substance, a population-level measure of toxicity is often used which relates the probabilities of an outcome for a given individual in a population. One such measure is the LD50. When such data does not exist, estimates are made by comparison to known similar toxic things, or to similar exposures in similar organisms. Then, "safety factors" are added to account for uncertainties in data and evaluation processes. For example, if a dose of a toxic substance is safe for a laboratory rat, one might assume that one tenth that dose would be safe for a human, allowing a safety factor of 10 to allow for interspecies differences between two mammals; if the data are from fish, one might use a factor of 100 to account for the greater difference between two chordate classes (fish and mammals). Similarly, an extra protection factor may be used for individuals believed to be more susceptible to toxic effects such as in pregnancy or with certain diseases. Or, a newly synthesized and previously unstudied chemical that is believed to be very similar in effect to another compound could be assigned an additional protection factor of 10 to account for possible differences in effects that are probably much smaller. Obviously, this approach is very approximate; but such protection factors are deliberately very conservative, and the method has been found to be useful in a deep variety of applications.

Assessing all aspects of the toxicity of cancer-causing agents involves additional issues, since it is not certain if there is a minimal effective dose for carcinogens, or whether the risk is just too small to see. In addition, it is possible that a single cell transformed into a cancer cell is all it takes to develop the full effect (the "one hit" theory).

It is more difficult to determine the toxicity of chemical mixtures than a pure chemical, because each component displays its own toxicity, and components may interact to produce enhanced or diminished effects. Common mixtures include gasoline, cigarette smoke, and industrial waste. Even more complex are situations with more than one type of toxic entity, such as the discharge from a malfunctioning sewage treatment plant, with both chemical and biological agents.

The preclinical toxicity testing on various biological systems reveals the species-, organ- and dose- specific toxic effects of an investigational product. The toxicity of substances can be observed by (a) studying the accidental exposures to a substance (b) in vitro studies using cells/ cell lines (c) in vivo exposure on experimental animals. Toxicity tests are mostly used to examine specific adverse events or specific end points such as cancer, cardiotoxicity, and skin/eye irritation. Toxicity testing also helps calculate the No Observed Adverse Effect Level (NOAEL) dose and is helpful for clinical studies.[3] 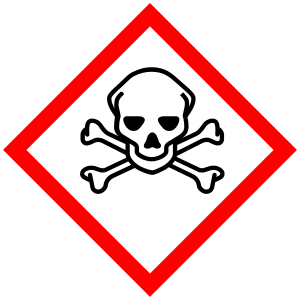 The international pictogram for toxic chemicals.

For substances to be regulated and handled appropriately they must be properly classified and labelled. Classification is determined by approved testing measures or calculations and have determined cut off levels set by governments and scientists. While currently many countries have different regulations regarding the types of tests, amounts of tests and cut off levels, the implementation of Global Harmonization will begin unifying these countries as early as 2008.[4][5]

The types of toxicities where substances may cause lethality to the entire body, lethality to specific organs, major/minor damage, or cause cancer. These are globally accepted definitions of what toxicity is.[7] Anything falling outside of the definition cannot be classified as that type of toxicant.

Note: The undefined values are expected to be roughly equivalent to the category 5 values for oral and dermal administration.[citation needed]

Other methods of exposure and severity

Skin corrosion and irritation are determined though a skin patch test analysis. This examines the severity of the damage done; when it is incurred and how long it remains; whether it is reversible and how many test subjects were affected.

Serious eye damage involves tissue damage or degradation of vision which does not fully reverse in 21 days. Eye irritation involves changes to the eye which do fully reverse within 21 days.

Other categories of toxicity

Aquatic toxicity testing subjects key indicator species of fish or crustacea to certain concentrations of a substance in their environment to determine the lethality level. Fish are exposed for 96 hours while crustacea are exposed for 48 hours. While GHS does not define toxicity past 100 mg/l, the EPA currently lists aquatic toxicity as “practically non-toxic” in concentrations greater than 100 ppm.[11]

Note: A category 4 is established for chronic exposure, but simply contains any toxic substance which is mostly insoluble, or has no data for acute toxicity.

Toxicity of a substance can be affected by many different factors, such as the pathway of administration (whether the toxin is applied to the skin, ingested, inhaled, injected), the time of exposure (a brief encounter or long term), the number of exposures (a single dose or multiple doses over time), the physical form of the toxin (solid, liquid, gas), the genetic makeup of an individual, an individual's overall health, and many others. Several of the terms used to describe these factors have been included here.

Acute exposure
A single exposure to a toxic substance which may result in severe biological harm or death; acute exposures are usually characterized as lasting no longer than a day.
Chronic exposure
Continuous exposure to a toxin over an extended period of time, often measured in months or years; it can cause irreversible side effects.

"Toxic" and similar words came from Greek τοξον = "bow (weapon)" via "poisoned arrow", which came to be used for "poison" in scientific language, as the usual Classical Greek word ('ιον) for "poison" would transcribe as "io-", which is not distinctive enough. In some biological names, "toxo-" still means "bow", as in Toxodon = "bow-toothed" from the shape.