Although simplified characters are taught and endorsed by the government of Mainland China, there is no prohibition against the informal use of traditional characters . Traditional characters are used informally primarily in handwriting and also used for inscriptions and religious text.[citation needed] They are often retained in logos or graphics to evoke yesteryear. Nonetheless, the vast majority of media and communications in China is dominated by simplified characters.

Taiwan has never adopted Simplified Chinese characters since it is ruled by Government of the Republic of China. The use of simplified characters in official documents is even prohibited by the government in Taiwan. Simplified characters are not well understood in general, although some stroke simplifications that have been incorporated into Simplified Chinese are in common use in handwriting.[1][2] Similarly, in Hong Kong and Macau, Traditional Chinese has been the legal written form since colonial times.

In recent years, because of the influx of mainland Chinese tourists,[citation needed] the appearance of simplified Chinese characters in Hong Kong and Macau has become increasingly common. Today, even government websites use simplified Chinese.[3] This has led to concerns by many local residents to protect their heritage of traditional Chinese characters.[citation needed] 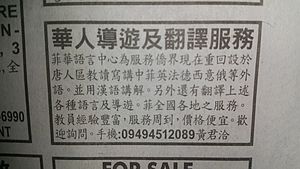 In Southeast Asia, the Chinese Filipino community remains to be some of the most conservative towards simplification.[citation needed] While major public universities are teaching simplified characters, many well-established Chinese schools still use traditional characters. Publications like the Chinese Commercial News, World News, and United Daily News still use traditional characters. On the other hand, the Philippine Chinese Daily uses simplified. Aside from local newspapers, magazines from Hong Kong, such as the Yazhou Zhoukan, are also found in some bookstores.

In case of film or television subtitles on DVD, the Chinese dub that is used for in Philippines is the same as the one used in Taiwan. This is because the DVDs belongs to DVD Region Code 3. Hence, most of the subtitles are in Traditional Characters.[citation needed]

File:Philippine Chinese Reader Series.jpg
A Series of Reading workbook in Traditional Chinese used in some Elementary schools in the Philippines.

The use of such words as "complex", "standard" and "proper" in the context of such a visceral subject as written language arouses strong emotional reactions, especially since there are also political ramifications in this case. Debate on traditional and simplified Chinese characters explores the differences of opinion that exist on this matter within Chinese-speaking regions.

The World Wide Web Consortium recommends the use of the language tag zh-Hant as a language attribute value and Content-Language value to specify web-page content in Traditional Chinese.[7]

Usage in other languages

Traditional Chinese characters are also known as Hanja in Korean (in the late 20th century almost completely replaced with Hangul), and many Kanji (used in Japanese) are unsimplified. Compared to the Chinese reform, many simplified Kanji were less affected (such as the character for round (also used to refer to Japanese and Chinese currency): 円 = Kanji, 圆 = simplified Chinese form, 圓 = full form). They coincide with those simplified in China but some were simplified differently, thus being a different standard (e.g. "dragon" 竜 current standard Japanese (tatsu/RYŪ), 龙 (Chinese simplified), 龍 (Chinese traditional) lóng (Mandarin), lung4 (Cantonese)).