From Infogalactic: the planetary knowledge core
Jump to: navigation, search
For the engineering of communications and computer networks, see Teletraffic engineering. 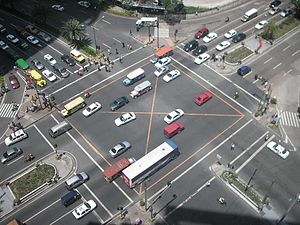 Traffic engineering is closely associated with other disciplines:

Traditionally, road improvements have consisted mainly of building additional infrastructure. However, dynamic elements are now being introduced into road traffic management. Dynamic elements have long been used in rail transport. These include sensors to measure traffic flows and automatic, interconnected, guidance systems to manage traffic (for example, traffic signs which open a lane in different directions depending on the time of day). Also, traffic flow and speed sensors are used to detect problems and alert operators, so that the cause of the congestion can be determined, and measures can be taken to minimize delays. These systems are collectively called intelligent transportation systems. 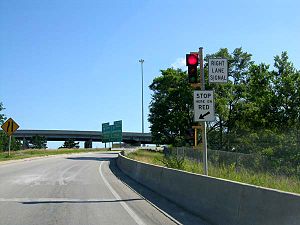 Therefore, speeds and lane flows at bottlenecks can be kept high during peak periods by managing traffic density using devices that limit the rate at which vehicles can enter the highway. Ramp meters, signals on entrance ramps that control the rate at which vehicles are allowed to enter the mainline facility, provide this function (at the expense of increased delay for those waiting at the ramps).

Highway safety engineering is a branch of traffic engineering that deals with reducing the frequency and severity of crashes. It uses physics and vehicle dynamics, as well as road user psychology and human factors engineering, to reduce the influence of factors that contribute to crashes.

1. Identify and prioritize investigation locations. Locations are selected by looking for sites with higher than average crash rates, and to address citizen complaints.

3. Analyze data. Look for collisions patterns or road conditions that may be contributing to the problem.

4. Identify possible countermeasures to reduce the severity or frequency of crashes.

• Evaluate cost/benefit ratios of the alternatives
• Consider whether a proposed improvement will solve the problem, or cause "crash migration." For example, preventing left turns at one intersection may eliminate left turn crashes at that location, only to increase them a block away.
• Are any disadvantages of proposed improvements likely to be worse than the problem you are trying to solve?

6. Evaluate results. Usually, this occurs some time after the implementation. Have the severity and frequency of crashes been reduced to an acceptable level? If not, return to step 2.