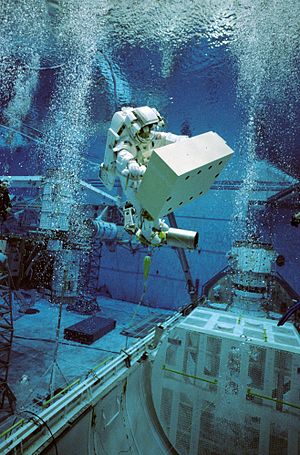 An astronaut in training for an extra-vehicular activity mission using an underwater simulation environment.

Training is teaching, or developing in oneself or others, any skills and knowledge that relate to specific useful competencies. Training has specific goals of improving one's capability, capacity, productivity and performance. It forms the core of apprenticeships and provides the backbone of content at institutes of technology (also known as technical colleges or polytechnics). In addition to the basic training required for a trade, occupation or profession, observers of the labor-market recognize as of 2008[update] the need to continue training beyond initial qualifications: to maintain, upgrade and update skills throughout working life. People within many professions and occupations may refer to this sort of training as professional development. 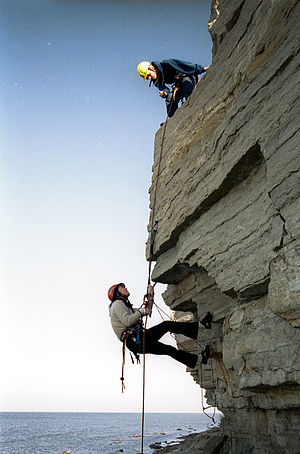 Mountaineering training in Estonia. It involves both instruction and physical exercise in the outdoor environment to develop skills that are necessary for survival in rock climbing.

Physical training concentrates on mechanistic goals: training-programs in this area develop specific skills or muscles, often with a view of peaking at a particular time. Some physical training programs focus on raising overall physical fitness.

In military use, training means gaining the physical ability to perform and survive in combat, and learning the many skills needed in a time of war. These include how to use a variety of weapons, outdoor survival skills, and how to survive being captured by the enemy, among many others. See military education and training.

For psychological or physiological reasons, people who believe it may be beneficial to them can choose to practice relaxation training, or autogenic training, in an attempt to increase their ability to relax or deal with stress.[1] While some studies have indicated relaxation training is useful for some medical conditions, autogenic training has limited results or has been the result of few studies. 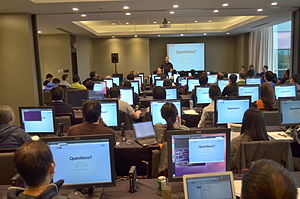 Some commentators use a similar term for workplace learning to improve performance: "training and development". There are also additional services available online for those who wish to receive training above and beyond that which is offered by their employers. Some examples of these services include career counseling, skill assessment, and supportive services.[2] One can generally categorize such training as on-the-job or off-the-job.

The on-the-job training method takes place in a normal working situation, using the actual tools, equipment, documents or materials that trainees will use when fully trained. On-the-job training has a general reputation as most effective for vocational work[citation needed].It involves employee training at the place of work while he or she is doing the actual job. Usually a professional trainer (or sometimes an experienced employee) serves as the course instructor using hands-on training often supported by formal classroom training. Sometimes training can occur by using web based technology or video conferencing tools.

Off-the-job training method takes place away from normal work situations — implying that the employee does not count as a directly productive worker while such training takes place. Off-the-job training method also involves employee training at a site away from the actual work environment. It often utilizes lectures, case studies, role playing and simulation, having the advantage of allowing people to get away from work and concentrate more thoroughly on the training itself. This type of training has proven more effective in inculcating concepts and ideas[citation needed]. Many personnel selection companies offer a service which would help to improve employee competences and change the attitude towards job. The internal personnel training topics can vary from effective problem solving skills to leadership training.

In religious and spiritual use, training may refer to the purification of the mind, heart, understanding and actions to obtain a variety of spiritual goals such as (for example) closeness to God or freedom from suffering. Note for example the institutionalized spiritual training of Threefold Training in Buddhism, Meditation in Hinduism or discipleship in Christianity. These aspects of training can be short term or last a lifetime, depending on the context of the training and which religious group it is a part of.

Parochial schools are a fairly widespread institution in the United States. A parochial school is a primary or secondary school supervised by a religious organization, especially a Roman Catholic day school affiliated with a parish or a holy order. As of 2004, out of the approximately 50 million children who were enrolled in American grade schools, 4.2 million children attend a church-affiliated school, which is approximately 1 in 12 students.[4] Within the Christian religion, for example, one can attend a church-affiliated college with the intent of getting a degree in a field associated with religious studies. Some people may also attend church-affiliated colleges in pursuit of a non-religious degree, and typically do it just to deepen their understanding of the specific religion that the school is associated with.[citation needed] The largest non-public school system in the United States, the Catholic school system, operates 5,744 elementary schools and 1,206 secondary schools.

Researchers have developed training-methods for artificial-intelligence devices as well. Evolutionary algorithms, including genetic programming and other methods of machine learning, use a system of feedback based on "fitness functions" to allow computer programs to determine how well an entity performs a task. The methods construct a series of programs, known as a “population” of programs, and then automatically test them for "fitness", observing how well they perform the intended task. The system automatically generates new programs based on members of the population that perform the best. These new members replace programs that perform the worst. The procedure repeats until the achievement of optimum performance.[5] In robotics, such a system can continue to run in real-time after initial training, allowing robots to adapt to new situations and to changes in themselves, for example, due to wear or damage. Researchers have also developed robots that can appear to mimic simple human behavior as a starting point for training.[6]