In economics and related disciplines, a transaction cost is a cost incurred in making an economic exchange (restated: the cost of participating in a market).[1]

Transaction costs can be divided into three broad categories:[2] 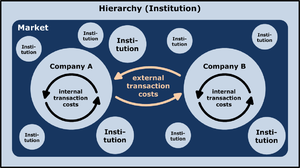 The idea that transactions form the basis of an economic thinking was introduced by the institutional economist John R. Commons (1931). He said that:

These individual actions are really trans-actions instead of either individual behavior or the "exchange" of commodities. It is this shift from commodities and individuals to transactions and working rules of collective action that marks the transition from the classical and hedonic schools to the institutional schools of economic thinking. The shift is a change in the ultimate unit of economic investigation. The classic and hedonic economists, with their communistic and anarchistic offshoots, founded their theories on the relation of man to nature, but institutionalism is a relation of man to man. The smallest unit of the classic economists was a commodity produced by labor. The smallest unit of the hedonic economists was the same or similar commodity enjoyed by ultimate consumers. One was the objective side, the other the subjective side, of the same relation between the individual and the forces of nature. The outcome, in either case, was the materialistic metaphor of an automatic equilibrium, analogous to the waves of the ocean, but personified as "seeking their level." But the smallest unit of the institutional economists is a unit of activity -- a transaction, with its participants. Transactions intervene between the labor of the classic economists and the pleasures of the hedonic economists,simply because it is society that controls access to the forces of nature, and transactions are, not the "exchange of commodities," but the alienation and acquisition, between individuals, of the rights of property and liberty created by society, which must therefore be negotiated between the parties concerned before labor can produce, or consumers can consume, or commodities be physically exchanged".

The term "transaction cost" is frequently thought to have been coined by Ronald Coase, who used it to develop a theoretical framework for predicting when certain economic tasks would be performed by firms, and when they would be performed on the market. However, the term is actually absent from his early work up to the 1970s. While he did not coin the specific term, Coase indeed discussed "costs of using the price mechanism" in his 1937 paper The Nature of the Firm, where he first discusses the concept of transaction costs, and refers to the "Costs of Market Transactions" in his seminal work, The Problem of Social Cost (1960). The term "Transaction Costs" itself can instead be traced back to the monetary economics literature of the 1950s, and does not appear to have been consciously 'coined' by any particular individual.[3]

According to Williamson, the determinants of transaction costs are frequency, specificity, uncertainty, limited rationality, and opportunistic behavior.

At least two definitions of the phrase "transaction cost" are commonly used in literature. Transaction costs have been broadly defined by Steven N. S. Cheung as any costs that are not conceivable in a "Robinson Crusoe economy"—in other words, any costs that arise due to the existence of institutions. For Cheung, if the term "transaction costs" were not already so popular in economics literatures, they should more properly be called "institutional costs".[5][6] But many economists seem to restrict the definition to exclude costs internal to an organization.[7] The latter definition parallels Coase's early analysis of "costs of the price mechanism" and the origins of the term as a market trading fee.

Starting with the broad definition, many economists then ask what kind of institutions (firms, markets, franchises, etc.) minimize the transaction costs of producing and distributing a particular good or service. Often these relationships are categorized by the kind of contract involved. This approach sometimes goes under the rubric of New Institutional Economics.

A supplier may bid in a very competitive environment with a customer to build a widget. However, to make the widget, the supplier will be required to build specialized machinery which cannot be easily redeployed to make other products. Once the contract is awarded to the supplier, the relationship between customer and supplier changes from a competitive environment to a monopoly/monopsony relationship, known as a bilateral monopoly. This means that the customer has greater leverage over the supplier such as when price cuts occur. To avoid these potential costs, "hostages" may be swapped to avoid this event. These hostages could include partial ownership in the widget factory; revenue sharing might be another way.

Car companies and their suppliers often fit into this category, with the car companies forcing price cuts on their suppliers. Defense suppliers and the military appear to have the opposite problem, with cost overruns occurring quite often. Technologies like enterprise resource planning (ERP) can provide technical support for these strategies.

Williamson argues in The Mechanisms of Governance (1996) that Transaction Cost Economics (TCE) differs from neoclassical microeconomics in the following six points: