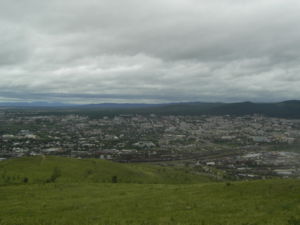 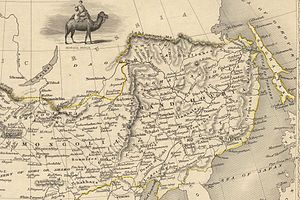 Dauria on a British 1851 map.
As the map was published 7 years before the Treaty of Aigun, eastern (Amur) Dauria is still shown as part of the Qing Empire.

Transbaikal, Trans-Baikal, Transbaikalia (Russian: Забайка́лье, tr. Zabaykalye; IPA: [zəbɐjˈkalʲjɪ]), or Dauria (Даурия, Dauriya) is a mountainous region to the east of or "beyond" (trans-) Lake Baikal in Russia.

The alternative name, Dauria, is derived from the ethnonym of the Daur people. It stretches for almost 1,000 km from north to south from the Patomskoye Plateau and North Baikal Plateau to the Russian state border. The Transbaikal region covers more than 1,000 km from west to east from Baikal to the meridian of the confluence of the Shilka and Argun Rivers.

In Imperial Russia, Dauria was itself an oblast with its capital at Nerchinsk, then at Chita and became part of the short lived Far Eastern Republic between 1920 and 1922. It is currently divided into Buryatia and Zabaykalsky Krai and makes up nearly all of the territory of these two federal subjects.

The common name of the famous Dahurian larch (Larix gmelinii) as well as that of the Dahurian buckthorn (Rhamnus davurica) are also derived from the same source.

Oktyabrsky (Октябрьский) village, Amur Oblast, near the Russia-China border is a large site of uranium mining and processing facilities.[1]

Part of the area is protected by the Dauria Nature Reserve.[2]