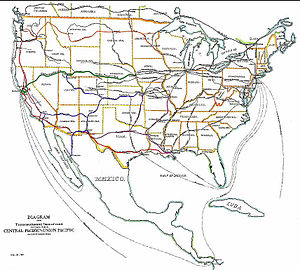 Transcontinental railroads in and near the United States (1887).

A transcontinental railroad is a contiguous network of railroad trackage[1] that crosses a continental land mass with terminals at different oceans or continental borders. Such networks can be via the tracks of either a single railroad, or over those owned or controlled by multiple railway companies along a continuous route. Although Europe is crisscrossed by railways, the railroads within Europe are usually not considered transcontinental, with the possible exception of the historic Orient Express.

Transcontinental railroads helped open up unpopulated interior regions of continents to exploration and settlement that would not otherwise have been feasible. In many cases they also formed the backbones of cross-country passenger and freight transportation networks.

In the United States of America, a series of transcontinental railroads built over the last third of the 19th century created a nationwide transportation network that united the country by rail. The first of these, the 3,103-kilometre (1,928 mi) "Pacific Railroad", was built by the Central Pacific Railroad and Union Pacific Railroad to link the San Francisco Bay at Oakland, California with the nation's existing eastern railroad network at Council Bluffs, Iowa/Omaha, Nebraska thereby creating the world's first transcontinental railroad when it opened in 1869. Its construction was made possible by the US Government under Pacific Railroad Acts of 1862, 1864 and 1867. 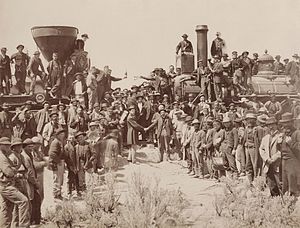 The ceremony for the driving of the "Last Spike" the joining of the tracks of the CPRR and UPRR grades at Promontory Summit, Utah, on May 10, 1869, Andrew J. Russell’s “East and West Shaking Hands at Laying of Last Rail.” May 10, 1869.
Main article: First Transcontinental Railroad

A transcontinental railroad in the United States is any continuous rail line connecting a location on the U.S. Pacific coast with one or more of the railroads of the nation's eastern trunk line rail systems operating between the Missouri or Mississippi Rivers and the U.S. Atlantic coast. The first concrete plan for a transcontinental railroad in the United States was presented to Congress by Asa Whitney in 1845.[2]

The world's First Transcontinental Railroad was built between 1863 and 1869 to join the eastern and western halves of the United States. Begun just before the American Civil War, its construction was considered to be one of the greatest American technological feats of the 19th century. Known as the "Pacific Railroad" when it opened, this served as a vital link for trade, commerce, and travel and opened up vast regions of the North American heartland for settlement. Shipping and commerce could thrive away from navigable watercourses for the first time since the beginning of the nation. Much of this line is currently used by Amtrak's California Zephyr, although some parts were rerouted or abandoned.[3]

The transcontinental railroad provided fast, safe, and cheap travel. The fare for a one-week trip from Omaha to San Francisco on an emigrant sleeping car was about $65 for an adult. It replaced most of the far slower and more hazardous stagecoach lines and wagon trains. The number of emigrants taking the Oregon and California Trail declined dramatically. The sale of the railroad land grant lands and the transport provided for timber and crops led to the rapid settling of the "Great American Desert".[4]

The Union Pacific recruited laborers from Army veterans and Irish immigrants while most of the engineers were ex-Army men who had learned their trade keeping the trains running during the American Civil War.[5]

The Central Pacific Railroad faced a labor shortage in the more sparsely-settled West. It recruited Cantonese laborers in China, who did prodigious work building the line over and through the Sierra Nevada mountains and then across Nevada to their meeting in northern Utah.

George J. Gould attempted to assemble a truly transcontinental system in the 1900s. The line from San Francisco, California, to Toledo, Ohio, was completed in 1909, consisting of the Western Pacific Railway, Denver and Rio Grande Railroad, Missouri Pacific Railroad, and the Wabash Railroad. Beyond Toledo, the planned route would have used the Wheeling and Lake Erie Railroad (1900), Wabash Pittsburgh Terminal Railway, Little Kanawha Railroad, West Virginia Central and Pittsburgh Railway, Western Maryland Railroad and Philadelphia and Western Railway,[citation needed] but the Panic of 1907 strangled the plans before the Little Kanawha section in West Virginia could be finished. The Alphabet Route was completed in 1931, providing the portion of this line east of the Mississippi River. With the merging of the railroads, only the Union Pacific Railroad and the BNSF Railway remain to carry the entire route. 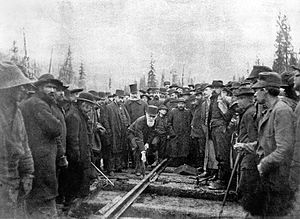 The completion of Canada's first transcontinental railroad, on November 7, 1885 is an important milestone in Canadian history. Between 1881 and 1885, the Canadian Pacific Railway (CPR) completed a line that spanned from the port of Montreal to the Pacific coast, fulfilling a condition of British Columbia's 1871 entry into the Canadian Confederation. The City of Vancouver, incorporated in 1886, was designated the western terminus of the line. The CPR became the first transcontinental railway company in North America in 1889 after its International Railway of Maine opened, connecting CPR to the Atlantic coast.

The construction of a transcontinental railroad strengthened the Canadian claim to the remaining parts of British North America not yet constituted as provinces and territories of Canada, and it acted as a bulwark against potential incursions by the United States.

Subsequently, two other transcontinental lines were built in Canada: the Canadian Northern Railway (CNoR) opened another line to the Pacific in 1912, and the combined Grand Trunk Pacific Railway (GTPR)/National Transcontinental Railway (NTR) system opened in 1917 following the completion of the Quebec Bridge, although its line to the Pacific opened in 1914. The CNoR, GTPR, and NTR were nationalized to form the Canadian National Railway, which currently is now Canada's largest transcontinental railway, with lines running all the way from the Pacific Coast to the Atlantic Coast. 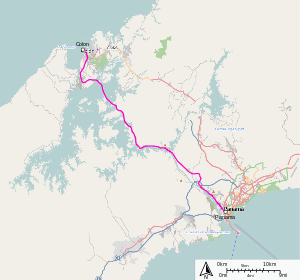 The first railroad to directly connect two oceans (although not by crossing a broad "continental" land mass[13]) was the Panama Rail Road. Opened in 1855, this 77-kilometre (48 mi) line was designated instead as an "inter-oceanic" [14] railroad crossing Central America at its narrowest point, the Isthmus of Panama, when that area was still part of Colombia. (Panama split off from Columbia in 1903 and became the independent nation of Panama). By spanning the isthmus, the line thus became the first railroad to completely cross any part of the Americas and physically connect ports on the Atlantic and Pacific Oceans. Given the tropical rain forest environment, the terrain, and diseases such as malaria and cholera, its completion was a considerable engineering challenge. The construction took five years after ground was first broken for the line in May, 1850, cost eight million dollars, and required more than seven thousand workers drawn from "every quarter of the globe."[15] 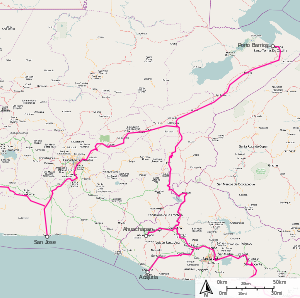 A second Central American inter-oceanic railroad began operation in 1908 as a connection between Puerto San José and Puerto Barrios in Guatemala, but ceased passenger service to Puerto San José in 1989.

A third Central American inter-oceanic railroad began operation in 1910 as a connection between Puntarenas and Limón in 1,067 mm (3 ft 6 in) gauge.

There is activity to revive the connection between Valparaíso and Santiago in Chile and Mendoza, Argentina, through the Transandino project. Mendoza has an active connection to Buenos Aires. The old Transandino began in 1910 and ceased passenger service in 1978 and freight 4 years later. Technically a complete transcontinental link exists from Arica, Chile, to La Paz, Bolivia, to Buenos Aires, but this trans-Andean crossing is for freight only.

For more details on this topic, see Eurasian Land Bridge.

The Trans-Australian Railway was the first route operated by the Federal Government.

In the 1940s, 1970s, and 2000s steps were taken to rationalise the gauge chaos and connect the mainland capital cities mentioned above with standard gauge 1,435 mm (4 ft 8 1⁄2 in). Since 1970, when the direct standard gauge line across the country was completed, the passenger train on the Sydney to Perth line has been called the Indian Pacific.

The proposed Iron Boomerang would connect iron in the Pilbara with coal in Queensland, so achieving loaded operations in both directions.