From Infogalactic: the planetary knowledge core
Jump to: navigation, search
This article is about transmission of signals. For biological transmission, see Vector (molecular biology).

The absence of a material medium in vacuum may also constitute a transmission medium for electromagnetic waves such as light and radio waves. While material substance is not required for electromagnetic waves to propagate, such waves are usually affected by the transmission media they pass through, for instance by absorption or by reflection or refraction at the interfaces between media.

A transmission medium can be classified as a: 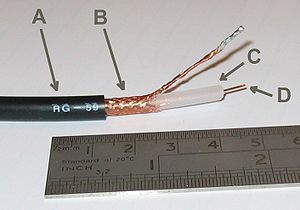 Coaxial cable, one example of a transmission medium

Electromagnetic radiation can be transmitted through an optical medium, such as optical fiber, or through twisted pair wires, coaxial cable, or dielectric-slab waveguides. It may also pass through any physical material that is transparent to the specific wavelength, such as water, air, glass, or concrete. Sound is, by definition, the vibration of matter, so it requires a physical medium for transmission, as do other kinds of mechanical waves and heat energy. Historically, science incorporated various aether theories to explain the transmission medium. However, it is now known that electromagnetic waves do not require a physical transmission medium, and so can travel through the "vacuum" of free space. Regions of the insulative vacuum can become conductive for electrical conduction through the presence of free electrons, holes, or ions.

Transmission and reception of data is performed in four steps.

A physical medium in data communications is the transmission path over which a signal propagates.

Many transmission media are used as communications channel.

For telecommunications purposes in the United States, Federal Standard 1037C, transmission media are classified as one of the following:

One of the most common physical medias used in networking is copper wire. Copper wire to carry signals to long distances using relatively low amounts of power. The unshielded twisted pair (UTP) is eight strands of copper wire, organized into four pairs.[2]

Another example of a physical medium is optical fiber, which has emerged as the most commonly used transmission medium for long-distance communications. Optical fiber is a thin strand of glass that guides light along its length. Four major factors favor optical fiber over copper- data rates, distance, installation, and costs. Optical fiber can carry huge amounts of data compared to copper. It can be run for hundreds of miles without the need for signal repeaters, in turn, reducing maintenance costs and improving the reliability of the communication system because repeaters are a common source of network failures. Glass is lighter than copper allowing for less need for specialized heavy-lifting equipment when installing long-distance optical fiber. Optical fiber for indoor applications cost approximately a dollar a foot, the same as copper.[3]

Wireless media may carry surface waves or skywaves, either longitudinally or transversely, and are so classified.

In both communications, communication is in the form of electromagnetic waves. With guided transmission media, the waves are guided along a physical path; examples of guided media include phone lines, twisted pair cables, coaxial cables, and optical fibers. Unguided transmission media are methods that allow the transmission of data without the use of physical means to define the path it takes. Examples of this include microwave, radio or infrared. Unguided media provide a means for transmitting electromagnetic waves but do not guide them; examples are propagation through air, vacuum and seawater.

The term direct link is used to refer to the transmission path between two devices in which signals propagate directly from transmitters to receivers with no intermediate devices, other than amplifiers or repeaters used to increase signal strength. This term can apply to both guided and unguided media.

A transmission may be simplex, half-duplex, or full-duplex.

In simplex transmission, signals are transmitted in only one direction; one station is a transmitter and the other is the receiver. In the half-duplex operation, both stations may transmit, but only one at a time. In full duplex operation, both stations may transmit simultaneously. In the latter case, the medium is carrying signals in both directions at same time.

There are two types of transmission media :

Unguided Media : Transmission media then looking at analysis of using them unguided transmission media is data signals that flow through the air. They are not guided or bound to a channel to follow. Following are unguided media used for data communication :