From Infogalactic: the planetary knowledge core
Jump to: navigation, search
This article is about transport in the modern state of Russia. For transport in Soviet Russia, see Transport in the Soviet Union.
File:Sapsan.JPG
A Russian Railways Siemens Velaro Sapsan train

The transport network of the Russian Federation is one of the world's most extensive. The national web of roads, railways and airways stretches almost 7,700 km (4,800 mi) from Kaliningrad in the west to the Kamchatka Peninsula in the east, and major cities such as Moscow and Saint Petersburg are served by extensive rapid transit systems.

Russia has adopted two national transport strategies in recent years. On 12 May 2005, the Russian Ministry of Transport adopted the Transport Strategy of the Russian Federation to 2020. Three years later, on 22 November 2008, the Russian government adopted a revised strategy, extending to 2030.

File:RU083 09.jpg
Postage stamp issued in 2009 by the Russian Post commemorating 200th Anniversary of the Transport Department of Russia

Russian Railways, the state-owned national rail carrier, is one of the world's largest transport companies, enjoying a monopoly over rail transport in Russia. Established in 1992, it employs an estimated 950,000 people, and accounted for 2.5% of the entire national GDP in 2009.[3][4] In 2007 alone, Russian Railways carried a total of 1.3 billion passengers[5] and 1.3 billion tons of freight[6] on its common-carrier routes.

Also there is a Metrotram system in Volgograd and three more cities with metro systems under construction: 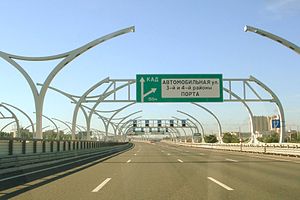 Road safety in Russia is poor with road accident deaths per million population higher than all countries in the G8 and the other BRIC countries. In 2008, the accident risk travelling on Russia's roads was 60 times that of Great Britain.[8] With a large land area the road density is the lowest of all the G8 and BRIC countries.[8] Dashcams are widespread, inasmuch as Russian courts prefer video evidence to eyewitness testimony, but also as a guard against police corruption and insurance fraud.[9]

During Soviet times, since 1945 the import of cars to a halt, with the onset of the free car sales Soviet production. But at the same time brought into the fairly large number of trucks and buses, mainly because of the socialist countries of Eastern Europe (e.g. urban, intercity and tourist buses Ikarus, buses and trucks Skoda, trucks Industriewerke Ludwigsfelde, Robur, Tatra, LIAZ, Praga V3S, Csepel, Avia, ZSD Nysa passenger vans, Zuk cargo vans). At the same time they were imported and from the capitalist countries (OAF trucks in the late 50s, tractors from Volvo and Mercedes-Benz NG in 1970-1980 for Sovtransavto, organization engaged in international road transport, the party tractors Unic-Fiat in the middle 1970s for the Leningrad port, dump trucks Unit Rig in 1979-1983, dump trucks International Harvester Paystar and concrete mixers on their base for the construction of irrigation canals, dump trucks Berliet T60 in 1969 to open the mine and ore processing plant of Ai in the Orenburg Oblast, ballast tractors Fawn in 1970-1980's, dump trucks Komatsu since 1979; bonneted flatbed trucks and dump trucks Magirus, since 1975 for the construction of Baikal–Amur Mainline (BAM)).

By the 1980 Summer Olympics in Moscow, priority was given to smaller cars such as the Mercedes-Benz S-Class W116 to work as police cars and taxis for tourists, as well as on the basis of reanimating the sales of vans of the same brand.

In 1988, together with the resolution of business, was allowed free sale of trucks and buses.

Since the 1990s, there was a massive import of cars, second-hand first, and then the new.

In the 2000s, foreign companies began to massively build factories in Russia, or to enter into agreements with existing assembly plants.

Currently, the European and Asian parts of Russia as different fleet. In the European part of the new cars mostly Russian, European, Japanese, American, Chinese; on the Asian side are mainly used Japanese cars, it is often a model for the Japanese domestic market (the largest proportion in Vladivostok).

The largest share of Russian car brands in the North Caucasus (e.g. Dagestan and Chechnya).

The same attitude on the trucks. Recently, European and Chinese trucks brands in the Russian pushed long haul, although the position of Russian in the short and middle transport remain.

In the same way the American imported trucks (mainly long-range tractors) that despite this popular in Russia. In Russia reach trucks from brands like Freightliner, International, Peterbuilt and Volvo models for United States market. In late 2013 International he started his own office and started formal sale of the tractor International ProStar in a special version for Russia. In 2014, due to begin official sales of dump trucks Western Star 6900XD. 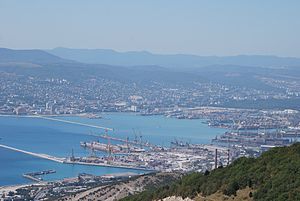 Overview of the Port of Novorossiysk

According to the data of the Maritime Board (Morskaya Kollegiya) of the Russian Government for 2004,[12] 136.6 million tons of cargo have been carried that year over Russia's inland waterways, the total cargo transportation volume being 87,556.5 million ton-km. During same year, 53 companies were engaged in carrying passengers over Russia's inland waterways; they transported 22.8 million passengers, the total volume of river passenger transportation being 841.1 million passenger-km.

Black Sea and Sea of Azov

White Sea, Barents Sea, and other seas of Arctic Ocean

Russia is home to the world's longest oil pipeline, the Druzhba pipeline and in fact one of the biggest oil pipeline networks in the world. It carries oil some 4,000 kilometres (2,500 mi) from the eastern part of the European Russia to points in Ukraine, Belarus, Poland, Hungary, Slovakia, the Czech Republic and Germany. The network also branches out into numerous pipelines to deliver its product throughout the Eastern Europe and beyond. The name "Druzhba" means "friendship", alluding to the fact that the pipeline supplied oil to the energy-hungry western regions of the Soviet Union, to its "fraternal socialist allies" in the former Soviet bloc, and to western Europe. Today, it is the largest principal artery for the transportation of Russian (and Kazakh) oil across Europe.

On 29 October 2012 president Vladimir Putin instructed the general manager of Gazprom to start the construction of the pipeline. On 21 May 2014, Russia and China signed a 30-years gas deal which was need to make the project feasible. Construction was launched on 1 September 2014 in Yakutsk by president Putin and Chinese deputy premier minister Zhang Gaoli.[13][14] 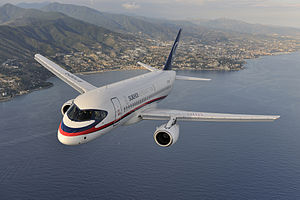 Aircraft manufacturing is an important industrial sector in Russia, employing around 355,300 people. The dissolution of the Soviet Union led to a deep crisis for the industry, especially for the civilian aircraft segment. The situation started improving during the middle of the first decade of the 2000s due to growth in air transportation and increasing demand. A consolidation programme launched in 2005 led to the creation of the United Aircraft Corporation holding company, which includes most of the industry's key companies. According to the Federal State Statistics Service of the Russian Federation, as of 2012, there were 6,200 civil aircraft in Russia.[10]