Transport in Ukraine includes ground transportation (automobile and rail), water (sea and river), aerial transportation, and pipelines. The transportation sector accounts for roughly 11% of the country's gross domestic product and 7% of total employment.

Transport industry in economy of Ukraine

Today the transport sector in Ukraine generally meets only the basic needs of the economy and population. The level of safety, quality and efficiency of passenger and freight transport, as well as the infrastructure's amount of energy usage, and the technological burden it places on the environment do not meet modern-day requirements.

Due to the low level of demand, the country's existing transit potential and advantageous geographical position is not fully utilised. There is thus a lag in the development of transport infrastructure, transport and logistics technologies and multimodal transport. All this has made Ukraine uncompetitive as the high costs of transport across the country make the cost of production in the country uncommonly high.

The advantageous geographical position of Ukraine allows for the location of a number of International Transport Corridors on its territory, in particular :

The share of the transport sector in Ukraine's gross domestic product (according to Goskomstat) as of 2009 was 11.3%. The number of workers employed in the sector is almost 7% of total employment. The transportation infrastructure of Ukraine is adequately developed overall, however it is obsolete and in need of major modernization. A remarkable boost in the recent development of the country's transportation infrastructure was noticed after winning the right to host a major continental sport event the UEFA Euro 2012.

In 2009, Ukrainian infrastructure provided for the transportation of 1.5 billion tons of cargo and 7.3 billion passengers. As the global financial crisis took hold and demand for major export commodities in 2009 fell, the volume of freight traffic decreased by 17,6% when compared with figures from 2008; passenger transport fell by 12,7%. 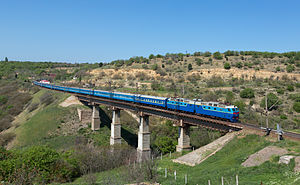 The length of the railway network Ukraine ranks third in Europe (21.7000 kilometres of track).

Ukrainian trains and trackway are incapable of speeds more than 160 kilometers per hour. However, the number of railway passengers and freight climbs. The government made huge investments in the railways in preparation for Euro 2012. There are intercity trains between Euro 2012 cities (Kiev, Lviv, Kharkiv and Donetsk). However, there is currently not enough line capacity provided on routes to the south and the Crimea. 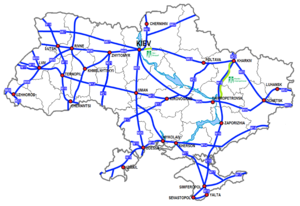 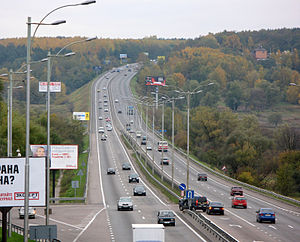 This is due to a number of objective reasons, including that the burden of maintaining the transport network per capita is significantly higher than in European countries because of Ukraine's relatively low population density (76 people per square kilometre), low purchasing power of citizens (1/5 of the Eurozone's purchasing capacity), relatively low car ownership and the nation's large territory.

The operational condition of roads is very poor; around 51.1% of roads do not meet minimum standards, and 39.2% require major rebuilds. The average speed on roads in Ukraine 2 - 3 times lower than in Western countries.

Note: State highways are important national routes and are not necessarily high-speed roads

A Boeing 737 of UIA, one of Ukraine's flag carriers, taxiing at Barcelona (El Prat) Airport

The aviation section in Ukraine is developing very quickly, having recently established a visa-free program for EU nationals and citizens of a number of other 'Western' nations,[5] the nation's aviation sector is handling a significantly increased number of travellers. Additionally, the granting of the Euro 2012 football tournament to Poland and Ukraine as joint hosts has prompted the government to invest huge amounts of money into transport infrastructure, and in particular airports.[6]

Currently there are three major new airport terminals under construction in Donetsk, Lviv and Kiev, a new terminal has already opened in Kharkiv and Kiev's Boryspil International Airport has recently begun operations at Terminal F,[7] the first of its two new international terminals. Ukraine has a number of airlines, the largest of which are the nation's flag carriers, Aerosvit and UIA. Antonov Airlines, a subsidiary of the Antonov Aerospace Design Bureau is the only operator of the world's largest fixed wing aircraft, the An-225. 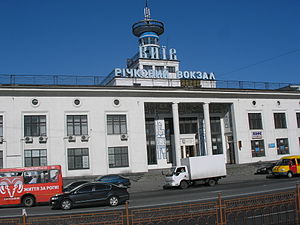 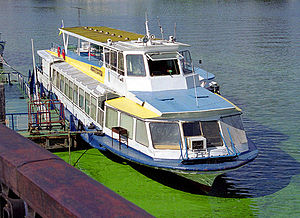 1,672 km (1,039 mi) navigable waterways on 7 rivers, most of them are on Danube, Dnieper and Pripyat rivers. All Ukraine's rivers freeze over in winter (usually December through March), limiting navigation. However, river icebreakers are available on the Dnieper, at least in vicinity of Kiev.[8]

The most important waterway of Ukraine[citation needed].

Dnipro within Ukraine is a regulated system of reservoirs separated by dams with shiplocks. The river is navigable through all its Ukrainian length.

Notable riverport Chernobyl is now abandoned due to the Chernobyl disaster, but the waterway retains its importance as part of the Dnieper–Baltic Sea route.

Plans are announced to revitalize commercial freight navigation on the Southern Bug as part of the increasing grain export from Ukraine.[9]

For more details on this topic, see List of ports in Ukraine. 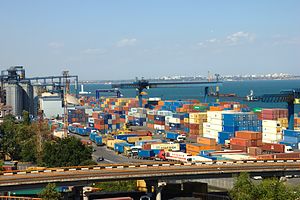 Port of Odessa on the Black Sea is the largest seaport in Ukraine.

Marine Trade Ports and their terminals 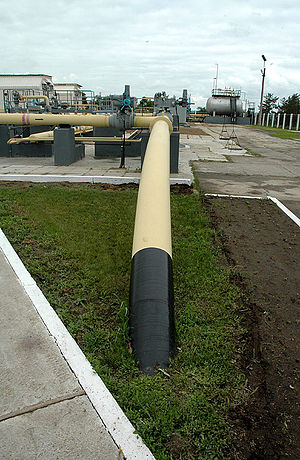 The world's longest ammonia pipeline, running from the TogliattiAzot plant in Russia to Odessa in Ukraine.