The transtheoretical model of behavior change assesses an individual's readiness to act on a new healthier behavior, and provides strategies, or processes of change to guide the individual through the stages of change to Action and Maintenance.

The transtheoretical model is also known by the abbreviation "TTM"[1] and by the term "stages of change."[2][3] A popular book, Changing for Good,[4] and articles in the news media[5][6][7][8][9] have discussed the model. It is "arguably the dominant model of health behaviour change, having received unprecedented research attention, yet it has simultaneously attracted criticism."[10]

History and core constructs of the model

James O. Prochaska of the University of Rhode Island and colleagues developed the transtheoretical model beginning in 1977.[11] It is based on analysis and use of different theories of psychotherapy, hence the name "transtheoretical."

Prochaska and colleagues refined the model on the basis of research that they published in peer-reviewed journals and books.[12]

In the transtheoretical model, change is a "process involving progress through a series of stages:"[19][20]

Relapse/Recycling:In addition, the researchers conceptualized "relapse" (recycling) which is not a stage in itself but rather the "return from Action or Maintenance to an earlier stage."[19][nb 3]

People at this stage do not intend to start the healthy behavior in the near future (within 6 months), and may be unaware of the need to change. People here learn more about healthy behavior: they are encouraged to think about the pros of changing their behavior and to feel emotions about the effects of their negative behavior on others.

Precontemplators typically underestimate the pros of changing, overestimate the cons, and often are not aware of making such mistakes.

One of the most effective steps that others can help with at this stage is to encourage them to become more mindful of their decision making and more conscious of the multiple benefits of changing an unhealthy behavior.

Stage 2: Contemplation (consciousness)
At this stage, participants are intending to start the healthy behavior within the next 6 months. While they are usually now more aware of the pros of changing, their cons are about equal to their Pros. This ambivalence about changing can cause them to keep putting off taking action.

People here learn about the kind of person they could be if they changed their behavior and learn more from people who behave in healthy ways.

Others can influence and help effectively at this stage by encouraging them to work at reducing the cons of changing their behavior.

Stage 3: Preparation (pre action)
People at this stage are ready to start taking action within the next 30 days. They take small steps that they believe can help them make the healthy behavior a part of their lives. For example, they tell their friends and family that they want to change their behavior.

People in this stage should be encouraged to seek support from friends they trust, tell people about their plan to change the way they act, and think about how they would feel if they behaved in a healthier way. Their number one concern is: when they act, will they fail? They learn that the better prepared they are, the more likely they are to keep progressing.

Stage 4: Action(current 'action)'
People at this stage have changed their behavior within the last 6 months and need to work hard to keep moving ahead. These participants need to learn how to strengthen their commitments to change and to fight urges to slip back.

People in this stage progress by being taught techniques for keeping up their commitments such as substituting activities related to the unhealthy behavior with positive ones, rewarding themselves for taking steps toward changing, and avoiding people and situations that tempt them to behave in unhealthy ways.

Stage 5: Maintenance(monitoring)
People at this stage changed their behavior more than 6 months ago. It is important for people in this stage to be aware of situations that may tempt them to slip back into doing the unhealthy behavior—particularly stressful situations.

It is recommended that people in this stage seek support from and talk with people whom they trust, spend time with people who behave in healthy ways, and remember to engage in healthy activities to cope with stress instead of relying on unhealthy behavior.

Stage 6: Relapse (resuming)[25][26][27][28] The relapse stage in the TTM model specifically applies to individuals who successfully quit smoking or using drugs or alcohol, only to resume these unhealthy behaviors in the Maintenance stage. Individuals who attempt to quit highly addictive behaviors such as drug, alcohol, and tobacco use are at particularly high risk of a relapse. Achieving a long-term behavior change often requires ongoing support from family members, a health coach, a physician, or another motivational source. Supportive literature and other resources can also be helpful to avoid a relapse from happening.

The 10 processes of change are "covert and overt activities that people use to progress through the stages."[19]

To progress through the early stages, people apply cognitive, affective, and evaluative processes. As people move toward Action and Maintenance, they rely more on commitments, conditioning, contingencies, environmental controls, and support.[29]

Prochaska and colleagues state that their research related to the transtheoretical model shows that interventions to change behavior are more effective if they are "stage-matched," that is, "matched to each individual's stage of change."[19][nb 4] 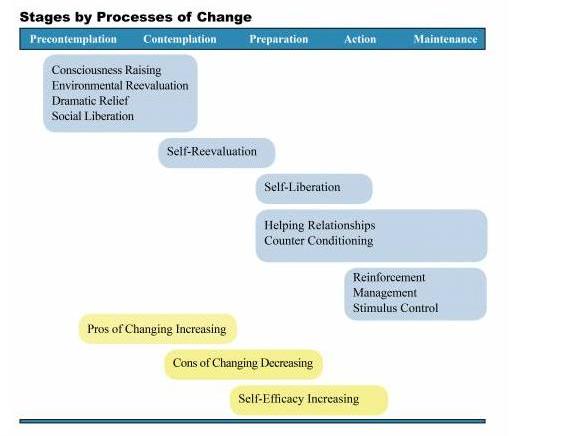 In general, for people to progress they need:

Sound decision making requires the consideration of the potential benefits (pros) and costs (cons) associated with a behavior's consequences. TTM research has found the following relationships between the pros, cons, and the stage of change across 48 behaviors and over 100 populations studied.

This core construct is "the situation-specific confidence people have that they can cope with high-risk situations without relapsing to their unhealthy or high risk-habit."[19][nb 6] Self-efficacy[32] conceptualizes a person's perceived ability to perform on a task as a mediator of performance on future tasks. A change in the level of self-efficacy can predict a lasting change in behavior if there are adequate incentives and skills. The transtheoretical model employs an overall confidence score to assess an individual's self-efficacy. Situational temptations assess how tempted people are to engage in a problem behavior in a certain situation.

The outcomes of the TTM computerized tailored interventions administered to participants in pre-Action stages are outlined below.

A national sample of pre-Action adults was provided a stress management intervention. At the 18-month follow-up, a significantly larger proportion of the treatment group (62%) was effectively managing their stress when compared to the control group. The intervention also produced statistically significant reductions in stress and depression and an increase in the use of stress management techniques when compared to the control group.[33] Two additional clinical trials of TTM programs by Prochaska et al. and Jordan et al. also found significantly larger proportions of treatment groups effectively managing stress when compared to control groups.[1][34]

Members of a large New England health plan and various employer groups who were prescribed a cholesterol lowering medication participated in an adherence to lipid-lowering drugs intervention. More than half of the intervention group (56%) who were previously pre-Action were adhering to their prescribed medication regimen at the 18-month follow-up. Additionally, only 15% of those in the intervention group who were already in Action or Maintenance relapsed into poor medication adherence compared to 45% of the controls. Further, participants who were at risk for physical activity and unhealthy diet were given only stage-based guidance. The treatment group doubled the control group in the percentage in Action or Maintenance at 18 months for physical activity (43%) and diet (25%).[36]

Participants were 350 primary care patients experiencing at least mild depression but not involved in treatment or planning to seek treatment for depression in the next 30 days. Patients receiving the TTM intervention experienced significantly greater symptom reduction during the 9-month follow-up period. The intervention’s largest effects were observed among patients with moderate or severe depression, and who were in the Precontemplation or Contemplation stage of change at baseline. For example, among patients in the Precontemplation or Contemplation stage, rates of reliable and clinically significant improvement in depression were 40% for treatment and 9% for control. Among patients with mild depression, or who were in the Action or Maintenance stage at baseline, the intervention helped prevent disease progression to Major Depression during the follow-up period.[37]

In each stage the patient will have multiple source influence it behavior in include friend,book,doctor advice, will decision how the smoke control result. Each stage have to monitor and trying to sustaining. TTM help treatment process to which stage, so the doctor,nurse could made the decision

Among the criticisms of the model are the following:

The following notes summarize major differences between the well-known 1983,[17] 1992,[16] and 1997[19] versions of the model. Other published versions may contain other differences. For example, Prochaska, Prochaska, and Levesque (2001)[23] do not mention the Termination stage, Self-efficacy, or Temptation.