From Infogalactic: the planetary knowledge core
Jump to: navigation, search
This article is about the former British colony. For other uses, see Transvaal (disambiguation). 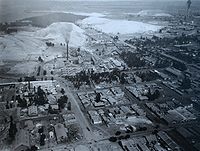 Both the Boer republics, the ZAR and the Orange Free State were defeated in the Anglo Boer War and surrendered to Britain. A peace treaty was signed, the Treaty of Vereeniging which contained the following terms:

In 1902, with peace following the signing of the Treaty of Vereeniging, the new Transvaal colony was faced with intertwined economic and political issues that need to be resolved. The economic issues faced included the restoration of the mining industry to pre-war levels, then growing it further with the need for extra labour, the restoration of the Boers to their lands and increasing the agricultural output of those farms. The political issue faced depended on what side you stood. The existing British administrators under Alfred Milner wished to anglicise the population through two main means. One by increasing the English speaking population of the Transvaal and secondly teach the Boer children in English with very little Dutch used, followed by self-rule. The Transvaal Boers political objectives was the restoration of self-rule in the colony and the political environment to be dominated by the Boer.

As the war ended the British were faced with a large proportion of Boer men as prisoners of war and their families in concentration camps.[4]:269 As the British followed a scorched earth policy in the Transvaal, Boer lands, stock and farms had been destroyed.[4]:266 The British administrators set out to place most Boer farmers back on their land by March 1903 with nineteen million pounds spent on war damages, grants and loans.[4]:266 The administrators reformed the state agricultural departments to modernise farming in the colony which resulted in a maize and beef surplus by 1908.[4]:271 They also attempted to solve the poor white problem by settling them as tenant farmers on state land but lack of capital and labour caused the scheme to fail.[4]:269 An attempt was made to place English settlers on farmland so as to anglicise the Transvaal and increase the English speaking population but this failed too as the policy attracted too few settlers.[4]:269

By the end of 1901, gold mining finally resumed on the Rand around Johannesburg, having virtually stopped since 1899. Backed by the mining magnates and the British administrators, there was a need to restart the industry but labour was required. Just prior to the war, white miners wages were high and magnates weren’t keen to increase the wages and since black miners wages had been reduced before the war and not increased, so black labour weren't interested in working the mines.[4]:267 Unskilled white labour was ruled out as their wages would be too high for the work done, so the mining magnates and their Chamber of Mines in 1903, sought alternative labour in the form of cheap Chinese workers.[4]:267 This was eventually rubber stamped by the British and mining appointed Transvaal Legislative Council with extremely restrictive employment contracts for the Chinese workers and a fear campaign aimed at the white miners about the need for this labour or face the possibility of loss of mining and their jobs.[4]:267 By 1906, the gold mines of the Witwatersrand were in full production and by 1907, South African gold mines represented thirty two percent of the worlds gold output.[4]:268 By 1910, Chinese labour ended on the Witwatersrand and the restrictive job reservation laws preventing Chinese miners doing certain jobs was replicated for Black miners.[4]:268

From the end of the war in 1902, the political administration of the Transvaal colony was controlled by members of a legislative and executive council, all appointed by the British Administrators under Alfred Milner and the Colonial Secretary in London.[4]:269 In 1903, three seats in the Transvaal Legislative council were offered to Louis Botha, Jan Smuts and Koos de la Rey, but they turned the British down.[4]:269 Due to a lack of a hearing given to the opinions of the Boer generals by the English administrators concerning the Chinese mine labour, due to a belief they did not represent the Boer population, and the want of self-rule, garnered Louis Botha and others to meet in 1904 at a Volkskongres.[4]:270 The result of this people congress was the unification of the Boer political movement in the Transvaal into a new party called Het Volk in January 1905 by Louis Botha and Jan Smuts.[4]:270 This new party’s objective was to seek reconciliation with Britain, which would be favoured by the British opposition Liberal Party, and Boer self-rule for the Transvaal.[4]:270 English political movements included the Transvaal Progressive Association backing the mining industry, the Transvaal Responsible Government Association and labour groups under an Industrial Labour Party.[4]:270

The “pro-Boer” Liberal Party in Britain came to power in January 1906 with a new policy for the two former Boer colonies, one of self-rule.[4]:270 Jan Smuts visited London and managed to persuade the new government to formulate a system that would favour the Boers and Het Volk in a new political assembly.[4]:270 More than a year later in February 1906 an election was held with Het Volk running on two issues; Chinese labour needing to be ended when new labour sources were found and reconciliation with Britain with which they hoped would attract the English labourer vote as well as selling themselves as an alternative to the mining capitalistic Progressive Party.[4]:270 Het Volk won the election gathering 37 of 69 seats. Louis Botha became Prime Minister of the Transvaal with Jan Smuts as its colonial secretary.[4]:270 By 1908, the Boers had won control of Natal, Orange River and Transvaal colonies, but under British influence with the need now to unite the country under one government.[4]:270

In May 1908, Jan Smuts, Transvaal Colonial Secretary proposed a gathering of representatives from all four colonies. This would take the form of a National Convention.[4]:271 The objective was to find a solution to the political, racial and economic problems encountered by these colonies and find common ground between Boer and the English.[4]:271 On 12 October 1908, the thirty white delegates of the four colonies met in Durban under the Chairmanship of Sir Henry de Villiers.[4]:271 Twelve delegates came from the Cape Colony, eight from the Transvaal and five each from the Orange River and Natal Colonies representing a gathering of sixteen from an English background and the remaining fourteen were of Boer origin.[4]:271

The main issues discussed was whether the four colonies would become a country made up of a union or a federation. Who would be allowed to vote and the amount of voters who would make-up a constituency in a rural and urban seat. All three objectives were eventually finalised with South Africa to become a union which was the wish of both the Liberal British government and Jan Smuts.[4]:271 On the question of black enfranchisement, the British government was prepared to accept the final wishes of the National Convention.[4]:271 The colonies of the Transvaal, Orange River and Natal wanted no black enfranchisement while the Cape Colony wished to keep what limited enfranchisement it had for all other races.[4]:271 A compromise was reached and all the colonies wishes concerning their racial make-up for enfranchisement was accepted, though subject to a repeal by a two thirds majority in both houses of parliament.[4]:271 As to the objective of rural and urban constituencies, it was decided to allow fifteen percent fewer constituents for a rural seat while an urban seat would have fifteen percent more constituents.[4]:271 This system for the constituencies would ensure that the Afrikaner would dominate politics in years to come and would be one of the many reasons why Jan Smuts would lose the 1948 election, sweeping D.F. Malan to power and the beginning of Apartheid.[4]:370 The results of the negotiations at the Convention became the draft South Africa Act which was released for viewing on 9 February 1909.[4]:281 By 19 August 1909, the South Africa Act passed through the Houses of Commons and into law.[4]:284

As to the question of black enfranchisement, the views of British and Boers were similar[citation needed] with Alfred Milner stating in a speech in 1903, that he believed in white superiority and thought the black man was not ready to rule and had similarly persuaded the Colonial Secretary Joseph Chamberlain to allow a future united white government to decide the question of the black franchise.[4]:266

The Transvaal Colony lay between Vaal River in the south, and the Limpopo River in the north, roughly between 22½ and 27½ S, and 25 and 32 E. To its south it bordered with the Orange Free State and Natal Colony, to its south-west were the Cape Colony, to the west the Bechuanaland Protectorate (later Botswana), to its north Rhodesia, and to its east Portuguese East Africa and Swaziland. Except in the south-west, these borders were mostly well defined by natural features. Within the Transvaal lies the Waterberg Massif, a prominent ancient geological feature of the South African landscape.

Cities in the Transvaal Colony:

Population statistics from the 1904 Census.[5]