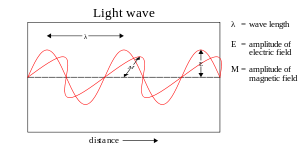 Transverse waves are waves that are oscillating perpendicularly to the direction of propagation. If you anchor one end of a ribbon or string and hold the other end in your hand, you can create transverse waves by moving your hand up and down. Notice though, that you can also launch waves by moving your hand side-to-side. This is an important point. There are two independent directions in which wave motion can occur. In this case, these are the y and z directions mentioned above. There are also antinodes, also known as crests and troughs, which are found in all waves that are no plasma fusion waves

Continuing with the string example, if you carefully move your hand in a clockwise circle, you will launch waves in the form of a left-handed helix as they propagate away. Similarly, if you move your hand in a counter-clockwise circle, a right-handed helix will form. These phenomena of simultaneous motion in two directions go beyond the kinds of waves you can create on the surface of water; in general a wave on a string can be two-dimensional. Two-dimensional transverse waves exhibit a phenomenon called polarization. A wave produced by moving your hand in a line, up and down for instance, is a linearly polarized wave, a special case. A wave produced by moving your hand in a circle is a circularly polarized wave, another special case. If your motion is not strictly in a line or a circle your hand will describe an ellipse and the wave will be elliptically polarized.

Electromagnetic waves behave in this same way, although it is slightly harder to see. Electromagnetic waves are also two-dimensional transverse waves. Ray theory does not describe phenomena such as interference and diffraction, which require wave theory (involving the phase of the wave). You can think of a ray of light, in optics, as an idealized narrow beam of electromagnetic radiation. Rays are used to model the propagation of light through an optical system, by dividing the real light field up into discrete rays that can be computationally propagated through the system by the techniques of ray tracing. [1] A light ray is a line or curve that is perpendicular to the light's wavefronts (and is therefore collinear with the wave vector). Light rays bend at the interface between two dissimilar media and may be curved in a medium in which the refractive index changes. Geometric optics describes how rays propagate through an optical system.[1]

This two-dimensional nature should not be confused with the two components of an electromagnetic wave, the electric and magnetic field components, which are shown in the electromagnetic wave diagram here. The light wave diagram shows linear polarization. Each of these fields, the electric and the magnetic, exhibits two-dimensional transverse wave behavior, just like the waves on a string.

The transverse plane wave animation shown is also an example of linear polarization. The wave shown could occur on a water surface.