Trauma surgery is a surgical specialty that utilizes both operative and non-operative management to treat traumatic injuries, typically in an acute setting and normally focuses on the abdominal area along with any given 'Emergency' field they may be required to serve upon. Trauma surgeons generally complete residency training in general surgery and often fellowship training in trauma or surgical critical care. The trauma surgeon is responsible for initially resuscitating and stabilizing and later evaluating and managing the patient. The attending trauma surgeon also leads the trauma team, which typically includes nurses and support staff as well as resident physicians in teaching hospitals. 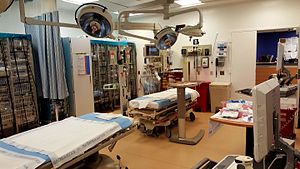 Training for trauma surgeons is sometimes difficult to obtain. In the United Kingdom, the Royal College of Surgeons of England is responsible for training consultants via the Definitive Surgical Trauma Skills course (DSTS). It remains the only course of its kind in the United Kingdom. The course was originally designed to teach the military and now trains both military and civilian surgeons. In the US there is the Advanced Trauma Operative Management (ATOM) course and the Advanced Surgical Skills for Exposure in Trauma (ASSET)which provide operative trauma training to surgeons and surgeons in training. The Advanced Trauma Life Support course (ATLS) is a course that most US practitioners who take care of trauma patients are required to take (Emergency medicine, Surgery and Trauma attendings, and physician extenders as well as trainees).

The broad scope of their surgical critical care training enables the trauma surgeon to address most injuries to the neck, chest, abdomen, and extremities. In large parts of Europe trauma surgeons treat most of the musculoskeletal trauma, whereas injuries to the central nervous system are generally treated by neurosurgeons. In the US and Britain skeletal injuries are treated by trauma orthopedic surgeons. Facial injuries are often treated by maxillofacial surgeons. There is significant variation across hospitals in the degree to which other specialists, such as cardiothoracic surgeons, plastic surgeons, vascular surgeons, and interventional radiologists are involved in treating trauma patients.

Trauma surgeons must be familiar with a large variety of general surgical, thoracic, and vascular procedures and must be able to make complex decisions, often with little time and incomplete information. Proficiency in all aspects of intensive care medicine/critical care is required. Hours are irregular and there is a considerable amount of night, weekend, and holiday work. Salaries for trauma surgeons are comparable to that of general surgeons.

Most patients presenting to trauma centers have multiple injuries involving different organ systems, and so the care of such patients often requires a significant number of diagnostic studies and operative procedures. The trauma surgeon is responsible for prioritizing such procedures and for designing the overall treatment plan. This process starts as soon as the patient arrives in the emergency department and continues to the operating room, intensive care unit, and hospital floor. In most settings, patients are evaluated according to a set of predetermined protocols (triage) designed to detect and treat life-threatening conditions as soon as possible. After such conditions have been addressed (or ruled out), non-life-threatening injuries are addressed.

Over the last few decades, a large number of advances in trauma and critical care have led to an increasing frequency of non-operative care for injuries to the neck, chest, and abdomen. Most injuries requiring operative treatment are musculoskeletal. For this reason, part of US trauma surgeons devote at least some of their practice to general surgery. In most American university hospitals and medical centers, a significant portion of the emergency general surgery calls are taken by trauma surgeons. The field combining trauma surgery and emergency general surgery is often called acute care surgery.

Dr. George E. Goodfellow is credited as the United States' first civilian trauma surgeon.[2] He opened a medical practice in the silver boom town of Tombstone, Arizona Territory in November 1880 where he practiced for the next 11 years.

On July 4, 1881, two days after U.S. President Garfield was shot in the abdomen by Charles J. Guiteau, a miner outside Tombstone was shot in the abdomen. On July 13, 1881, Goodfellow performed the first recorded laparotomy to treat the miner's gunshot wound. The man had a perforated small intestine, large intestine and bowel. Goodfellow sutured six holes in the man's organs. Similarly, President Garfield was thought later to have a bullet possibly lodged near his liver but it could not be found.[3][4]:M-9 Sixteen doctors attended to Garfield and most probed the wound with their fingers or dirty instruments.[5] Unlike the President, the miner survived.[6][7]

Goodfellow treated a number of notorious outlaw Cowboys in Tombstone, Arizona during the 1880s,[8] including Curly Bill Brocius.[9] During the Gunfight at the O.K. Corral on October 26, 1881, Deputy U.S. Marshal Virgil Earp and his brother Assistant Deputy U.S. Marshal Morgan Earp were both seriously wounded. Goodfellow treated both men's injuries.[10]:27 Goodfellow treated Virgil Earp again two months later on December 28, 1881 after he was ambushed, removing 3 inches (76 mm) of bone from his humerus[11] and attended to Morgan Earp on March 18, 1882, when he was shot while playing a round of billiards at the Campbell & Hatch Billiard Parlor. Morgan died of his wounds.[10]:38

Goodfellow once traveled to Bisbee, 30 miles (48 km) from Tombstone, to treat an abdominal gunshot wound. He operated on the patient stretched out on a billiard table. Goodfellow removed a .45-calibre bullet, washed out the cavity with hot water, folded the intestines back into position, stitched the wound closed with silk thread, and ordered the patient to take to a hard bed for recovery. He wrote about the operation: "I was entirely alone having no skilled assistant of any sort, therefore was compelled to depend for aid upon willing friends who were present—these consisting mostly of hard-handed miners just from their work on account of the fight. The anesthetic was administered by a barber, lamps held, hot water brought and other assistance rendered by others."[6]

Goodfellow pioneered the use of sterile techniques in treating gunshot wounds,[12] washing the patient's wound and his hands with lye soap or whisky.[6] He became America's leading authority on gunshot wounds[13] and was widely recognized for his skill as a surgeon.

By the late 1950s, mandatory laparotomy had become the standard of care for managing patients with abdominal penetrating trauma.[14] A laparotomy is still the standard procedure for treating abdominal gunshot wounds today.[14]