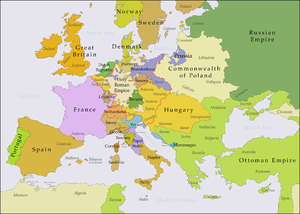 The Treaty of Aix-la-Chapelle of 1748, sometimes called the Treaty of Aachen, ended the War of the Austrian Succession following a congress assembled on 24 April 1748 at the Free Imperial City of Aachen—called Aix-la-Chapelle in French and then also in English—in the west of the Holy Roman Empire. The resulting treaty was signed on 18 October 1748 by Great Britain, France, and the Dutch Republic. Two follow-up implementation treaties were signed at Nice on 4 December 1748 and 21 January 1749 by Austria, Spain, Sardinia, Modena, and Genoa.[1]

Great Britain and France dictated the proposed terms of the treaty, which had previously been agreed at the Congress of Breda, and other nations accepted them. These were:

For the most part, the Treaty of Aix-la-Chapelle and the War of Austrian Succession concluded status quo ante bellum. In the commercial struggle between Britain and France in the West Indies, Africa, and India, nothing was settled; the treaty was thus no basis for a lasting peace.

In France, there was a general resentment at what was seen as a foolish throwing away of advantages (particularly in the Austrian Netherlands, which had largely been conquered by the brilliant strategy of Marshal Saxe), and it came to be popular in Paris to use the phrases Bête comme la paix ("Stupid as the peace") and La guerre pour le roi de Prusse ("The war for the king of Prussia"). By the same token, British colonists in New England and merchants back in Great Britain resented the return of Louisbourg to the French after they had captured the stronghold in a 46-day siege. This resentment was an early seed of the later American Revolution. In fact, Britain had exchanged Louisbourg so that France would withdraw from the Netherlands. Madras, captured by French Admiral La Bourdonnais in 1746, was returned to Britain likewise.

It was described thus by Lord Macaulay:

In Britain itself, George II and his ministers were seen as having conducted the war and the peace to the best advantage of Brunswick-Lüneburg (of which George was Elector) rather than Britain, and so the main British celebrations of the peace were only held six months later, with a fireworks display in Green Park for which Handel wrote his Music for the Royal Fireworks. This celebration was deliberately held near the royal residence of St James's Palace so as to present the king in a better light, as a British king and as the prime mover in a peace that was successful for Britain. (The display proved less successful than the music – the enormous wood building from which the fireworks were to be launched caught fire due to the fall of the bas relief of George II). George and Britain did gain from the treaty in one respect: that one clause of it had finally compelled the French to recognise the Hanoverian succession to the British throne and expel the Jacobites from France.

In Austria, reactions to the peace were mixed. The Pragmatic Sanction of 1713 had been issued by Holy Roman Emperor Charles VI to alter the law of succession of the Habsburg family, allowing his daughter Maria Theresa to inherit the Habsburg lands. Ostensibly the source of the long, bitter War of Austrian Succession, this sanction was upheld by the Treaty of Aix-la-Chapelle.[8] The monarchy, led by Maria Theresa’s foreign affairs chancellor Kaunitz,[9] had survived a disastrous crisis that could have brought its destruction and the Habsburg preeminence was confirmed in Germany. The Austrians had saved Bohemia and the duchy of Milan, conceding only minor concessions in Italy. Maria Theresa was also happy that France had given back the Austrian Netherlands that it had conquered.[10] Overall, she referred to the war as a miracle as she had saved her Empire from destruction.[11] However, she was very upset by the loss of the rich province of Silesia at the hand of Prussia.Britain’s support for this repossession at Aix-la-Chapelle spurned Kaunitz to establish an unprecedented alliance with Austria’s traditional enemy, France, following the establishment of the treaty.[12]

In the West Indies, the treaty did little to address possession of the islands. European powers had long pursued control of the Americas, viewing them as well-needed resources and proof of power.[13] Spain, the Netherlands, France and Britain all had unresolved tensions following settlements like the Treaty of Breda (1667), the Treaty of Westminster (1672) and the Treaty of Nijmegen.[14] By 1713, the islands of Saint Lucia and Tobago were the subjects of Anglo-Franco conflict.[15] However, the Treaty of Aix-la-Chapelle (1748) declared neutrality in Tobago, Grenada, Saint Vincent and Dominica,[16] allowing all European powers unfettered economic access and forbidding garrisons. In addition, France gained Saint Lucia as a colony.[17]

In contrast to French and British unhappiness with the treaty, Italy gained stability for the first time in the 18th century. The new territorial settlement and the accession of the pacific Ferdinand VI of Spain allowed the Aix settlement to last until the outbreak of the French Revolutionary Wars in 1792.