From Infogalactic: the planetary knowledge core
Jump to: navigation, search
For other uses, see Treaty of Bucharest (disambiguation). 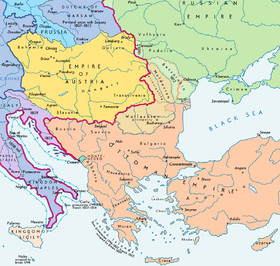 Southeast Europe after the treaty, Bessarabia shown in light green

The Treaty of Bucharest between the Ottoman Empire and the Russian Empire, was signed on 28 May 1812, in Bucharest, and ratified on 5 July 1812, at the end of the Russo-Turkish War.[1]

Under its terms, the eastern half of the Principality of Moldavia, between Prut and Dniester Rivers, with an area of 45,630 km2 (17,617.8 sq mi) (Bessarabia), was ceded by the Ottoman Empire (to which Moldavia was a vassal) to Russia. Also, Russia obtained trading rights on the Danube.

A truce was signed with the rebelling Serbs and autonomy given to Serbia.

The treaty, signed by the Russian commander Mikhail Kutuzov, was ratified by Alexander I of Russia just one day before Napoleon's invasion of Russia.[citation needed]

In Transcaucasia, the Ottomans renounced its claims to most of western Georgia[citation needed], but retained control of Akhalkalaki, Poti, and Anapa previously captured by the Russo-Georgian troops in the course of the war[2]