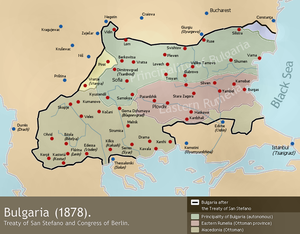 Borders of Bulgaria according to the Preliminary Treaty of San Stefano and the Treaty of Berlin.

The Preliminary Treaty of San Stefano (Russian: Сан-Стефанский мир; Peace of San-Stefano, Сан-Стефанский мирный договор; Peace treaty of San-Stefano, Turkish: Ayastefanos Muahedesi or Ayastefanos Antlaşması ) was a treaty between Russia and the Ottoman Empire signed at San Stefano, then a village west of Constantinople, on 3 March 1878, by Count Nicholas Pavlovich Ignatiev and Aleksandr Nelidov on behalf of the Russian Empire and Foreign Minister Safvet Pasha and Ambassador to Germany Sadoullah Bey on behalf of the Ottoman Empire.[1][2] The treaty ended the Russo-Turkish War, 1877–78.

Аccording to the official Russian position, by signing the treaty, Russia had never intended anything more than a temporary rough draft, so to enable a final settlement with the other Great Powers.[3]

The treaty provided for the creation of an autonomous Principality of Bulgaria following almost 500 years of Ottoman domination. The day the treaty was signed (March 3) is celebrated as Liberation Day in Bulgaria. However, the enlarged Bulgaria envisioned by the treaty alarmed neighboring states as well as France and Great Britain. As a result, it was never implemented, being superseded by the Treaty of Berlin following the Congress of the same name that took place three months later.[4]

San Stefano Peak on Rugged Island in the South Shetland Islands, Antarctica is named in commemoration of the Treaty[citation needed].

The treaty juridically set up an autonomous self-governing tributary principality Bulgaria with a Christian government and the right to keep an army, though the state de facto functioned as independent nation. Its territory included the plain between the Danube and the Balkan mountain range (Stara Planina), the region of Sofia, Pirot and Vranje in the Morava valley, Northern Thrace, parts of Eastern Thrace and nearly all of Macedonia (Article 6).

A prince elected by the people, approved by the Sublime Porte and recognized by the Great Powers was to take the helm of the country and a council of noblemen was to draft a Constitution (Article 7). The Ottoman troops were to pull out of Bulgaria, while the Russian military presence was to continue for two more years (Article 8).

On Serbia, Montenegro and Romania

Under the treaty, Montenegro more than doubled its territory with former Ottoman areas, including Nikšić, Podgorica and Antivari (Article 1), and the Ottoman Empire recognized its independence (Article 2).

Serbia annexed the Moravian cities of Niš and Leskovac and became independent (Article 3).

The Porte recognized the independence of Romania (Article 5). Romania gained Northern Dobruja from Russia (to which it was transferred from the Ottoman Empire) and ceded Southern Bessarabia in a forced exchange.

On Russia and the Ottoman Empire 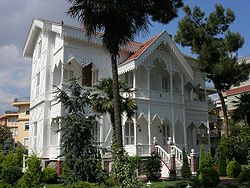 The Treaty was signed in this house of the Simeonoglou family in Yeşilköy.

In exchange for the war reparations, the Porte ceded Armenian and Georgian territories in the Caucasus to Russia, including Ardahan, Artvin, Batum, Kars, Olti, Beyazit, and Alashkert. Additionally, it ceded Northern Dobruja, which Russia handed to Romania in exchange for Southern Bessarabia (Article 19).

The Vilayet of Bosnia (Bosnia and Herzegovina) was supposed to become an autonomous province (Article 14) like Serbia was; Crete, Epirus and Thessaly were to receive a limited form of local self-government (Article 15), while the Ottomans vouched for their earlier-given promises to handle reforms in Armenia in order to protect the Armenians from abuse (Article 16).

The Straits — the Bosporus and the Dardanelles — were declared open to all neutral ships in war and peacetime (Article 24).

The Great Powers, especially British Prime Minister Benjamin Disraeli, were unhappy with this extension of Russian power, and Serbia feared the establishment of Greater Bulgaria would harm its interests in the Ottoman heritage. These reasons prompted the Great Powers to obtain a revision of the treaty at the Congress of Berlin through the Treaty of Berlin.

Romania, which had contributed significantly to the Russian victory in the war, was extremely disappointed by the treaty, and the Romanian public perceived some of its stipulations as Russia breaking the Russo-Romanian pre-war treaties that guaranteed the integrity of Romanian territory.

Austria-Hungary was disappointed with the treaty as it failed to expand its influence in Bosnia-Herzegovina.

The Albanians, dwelling in provinces controlled by the Ottoman Empire, objected to what they considered a significant loss of their territory to Serbia, Bulgaria, and Montenegro and realized they would have to organize nationally to attract the assistance of foreign powers seeking to neutralize Russia's influence in the region. The implications of the treaty led to the formation of the League of Prizren.[5]

It is important to note that in the "Salisbury Circular" of 1 April 1878, the British Foreign Secretary, the Marquess of Salisbury, made clear his and his government's objections to the Treaty of San Stefano and the favorable position in which it left Russia.

According to British historian A. J. P. Taylor, writing in 1954, "If the treaty of San Stefano had been maintained, both the Ottoman Empire and Austria-Hungary might have survived to the present day. The British, except for Beaconsfield in his wilder moments, had expected less and were therefore less disappointed. Salisbury wrote at the end of 1878, 'We shall set up a rickety sort of Turkish rule again south of the Balkans. But it is a mere respite. There is no vitality left in them.'"[6]