From Infogalactic: the planetary knowledge core
Jump to: navigation, search
Not to be confused with the Franco-Prussian treaty of alliance signed at Schönbrunn on 15 December 1805. 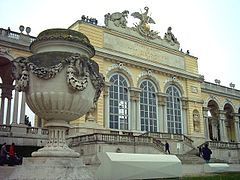 Gloriette (located on the grounds of the palace)

The Treaty of Schönbrunn (French: Traité de Schönbrunn; German: Friede von Schönbrunn), sometimes known as the Treaty of Vienna, was signed between France and Austria at the Schönbrunn Palace of Vienna on 14 October 1809. This treaty ended the Fifth Coalition during the Napoleonic Wars. Austria had been defeated, and France imposed harsh peace terms.

Austria ceded Salzburg to Bavaria, West Galicia to the Duchy of Warsaw, Tarnopol district to the Russian Empire and Trieste and Croatia south of the Sava River to France (see Illyrian provinces).

Austria recognized Napoleon's previous conquests from other nations as well as recognizing Napoleon's brother Joseph Bonaparte as King of Spain. Austria also paid to France a large indemnity and the Austrian army was reduced to 150,000 men - a promise not fulfilled.

Britain remained at war with France, one contemporary British view on the treaty was:

During the negotiations at Schönbrunn, Napoleon narrowly escaped an attempt on his life. On 12 October the emperor exited the palace with a large entourage to observe a military parade. A 17-year-old German patriot, Friedrich Staps, demanded an audience with Napoleon to present a petition, but was refused by the emperor's aide Jean Rapp. Shortly thereafter, Rapp observed Staps approaching Napoleon from a different direction, and had him arrested. Taken to the palace, Staps was found to be carrying a kitchen knife inside his coat, concealed inside the petition. Staps then admitted his plans to kill the emperor. Napoleon asked whether Staps would thank him if he was pardoned, to which Staps replied: "I would kill you none the less."

Napoleon left Vienna on 16 October and the next day Staps was shot outside the palace. At this execution, he is said to have shouted "Long live freedom! Long live Germany!"[5][6]

Staps soon came to be seen as a martyr of the burgeoning German nationalism. He was the subject of a poem by Christian Friedrich Hebbel and a play by Walter von Molo.