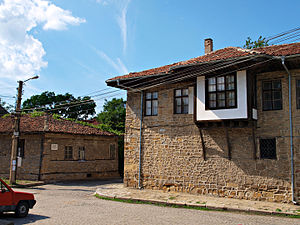 The treaty was signed in the little house to the left in modern Svishtov, Bulgaria

The Treaty of Sistova ended the last Austro-Turkish war (1787–91). Brokered by Great Britain, Prussia and the Netherlands,[1] it was signed in Sistova (modern Svishtov) in present-day Bulgaria on 4 August 1791.[2] The treaty was written in French and Turkish.[1]

Austria had been pushed back in the first year of the war, but had then conquered Belgrade, and gained another victory near Calafat in 1790. Austria's ally Russia had also been very successful. But Austria was threatened with invasion by Prussia;[3] also, the French Revolution had broken out, and demanded Austria's urgent attention. Under this pressure, Austria accepted only very meagre gains from the war: only the town of Orşova and two small places on the Croatian frontier were ceded to Austria.[4]

This treaty ended the Austro-Ottoman Wars. Austria did not participate in the Russian-led wars against the Ottomans during the 19th and 20th centuries.[5]

With the Turkish war ended, Austria joined with Prussia in the Declaration of Pillnitz on August 27. Austria renounced any expansion at the expense of the Ottoman Empire. In return Prussia promised not to expand to the east and not to support the Brabant Revolution. Both countries pledged to intervene in France if the various powers of Europe all agreed it was necessary.