From Infogalactic: the planetary knowledge core
Jump to: navigation, search
"Trepanation" redirects here. For other uses, see Trepanation (disambiguation).
Not to be confused with Trepanging. 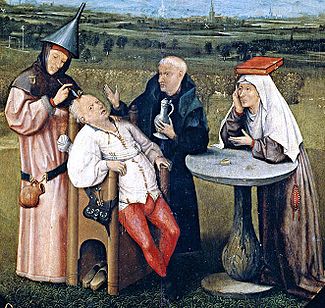 Detail from The Extraction of the Stone of Madness, a painting by Hieronymus Bosch depicting trepanation (c.1488–1516).

Trepanning, also known as trepanation, trephination, trephining or making a burr hole (the verb trepan derives via Old French via Medieval Latin from the Greek noun of relevant meaning trypanon, literally "borer, auger")[1][2] is a surgical intervention in which a hole is drilled or scraped into the human skull, exposing the dura mater to treat health problems related to intracranial diseases. It may also refer to any "burr" hole created through other body surfaces, including nail beds. It is often used to relieve pressure beneath a surface. A trephine is an instrument used for cutting out a round piece of skull bone.

In ancient times, holes were drilled into a person who was behaving in what was considered an abnormal way to let out what they believed were evil spirits.[3] Evidence of trepanation has been found in prehistoric human remains from Neolithic times onward. Cave paintings indicate that people believed the practice would cure epileptic seizures, migraines, and mental disorders.[4] The bone that was trepanned was kept by the prehistoric people and may have been worn as a charm to keep evil spirits away. Evidence also suggests that trepanation was primitive emergency surgery after head wounds[5] to remove shattered bits of bone from a fractured skull and clean out the blood that often pools under the skull after a blow to the head. Such injuries were typical for primitive weaponry such as slings and war clubs.[6]

There is some contemporary use of the term. In modern eye surgery, a trephine instrument is used in corneal transplant surgery. The procedure of drilling a hole through a fingernail or toenail is also known as trephination. It is performed by a physician or surgeon to relieve the pain associated with a subungual hematoma (blood under the nail); a small amount of blood is expressed through the hole and the pain associated with the pressure is partially alleviated. 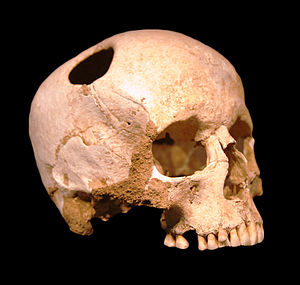 Trepanated skull, Neolithic. The perimeter of the hole in the skull is rounded off by ingrowth of new bony tissue, indicating that the patient survived the operation. 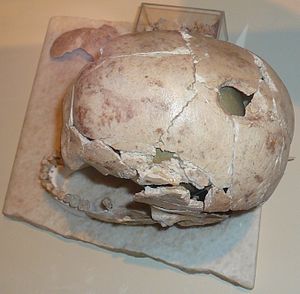 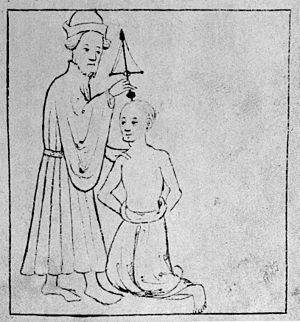 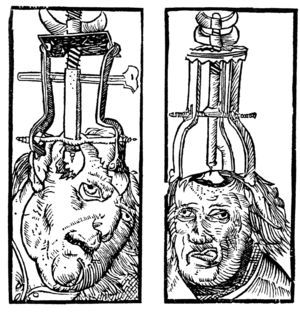 1525 engraving of trepanation by Peter Treveris (taken from Hieronymus Braunschweig's Buch der Cirurgia. Hantwirckung der Wundartzny 1497).
File:Dr John Clarke trepanning a skull operation.jpg
Dr. John Clarke trepanning a skull, ca. 1664, in one of the earliest American portraits. Clarke is alleged to have been the first physician to have performed the operation in the New England Colonies. 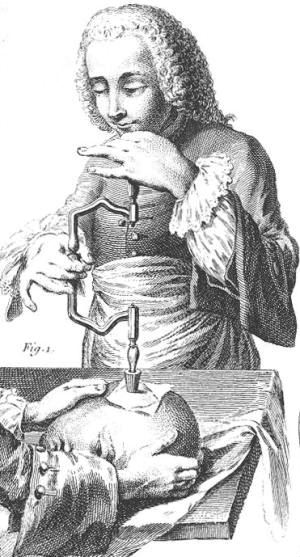 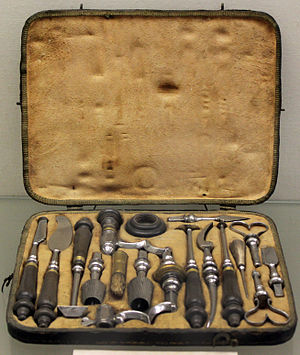 Trepanation is perhaps the oldest surgical procedure for which there is archaeological evidence,[7] and in some areas may have been quite widespread. Out of 120 prehistoric skulls found at one burial site in France dated to 6500 BC, 40 had trepanation holes.[8] Many prehistoric and premodern patients had signs of their skull structure healing, suggesting that many of those subjected to the surgery survived. Another skull with a trepanation hole was found at burial site Chalaghantepe (Agdam Rayon, Azerbaijan) dated to 5th millennium BC.

Surprisingly, more than 1500 trephined skulls from the Neolithic period (representing 5 to 10 % of all Stone Age skulls) have been uncovered throughout the world — i.e., from Europe, Scandinavia, Siberia, and China to North and South America.[citation needed] Most of the trephined crania belong to adult males, but women and children are also represented. Openings were single or multiple and of various sizes. As discussed previously, a myriad of reasons for these trepanations have been proposed. Recent evidence strongly suggest that the trepanations were carried out to bring back to life prominent members of the hunting group who were thought to be “dead” and could be made “undead” by opening the skull, according to the primitive conception of death and dying held by Neolithic people from their beliefs of magic as well as their experience of head injuries during hunting.[9][10][11]

In the more recent times of postclassical pre-Columbian Mesoamerica, evidence for the practice of trepanation and an assortment of other cranial deformation techniques comes from a variety of sources, including physical cranial remains of burials, allusions in iconographic artworks and reports from the post-colonial period.

Among New World societies trepanning is most commonly found in the Andean civilizations such as the pre-Incan cultures, for example the Paracas culture Ica situated in what now is Ica located South of Lima. It has also been found in the Muisca Confederation[12] (in modern-day Colombia) and the Inca Empire. In both, even cranioplasty existed. Its prevalence among Mesoamerican civilizations is much lower, at least judging from the comparatively few trepanated crania that have been uncovered.[13]

The archaeological record in Mesoamerica is further complicated by the practice of skull mutilation and modification carried out after the death of the subject, to fashion "trophy skulls" and the like of captives and enemies. This was a widespread tradition, illustrated in pre-Columbian art that occasionally depicts rulers adorned with or carrying the modified skulls of their defeated enemies, or of the ritualistic display of sacrificial victims. Several Mesoamerican cultures used a skull-rack (known by its Nahuatl term, tzompantli ), on which skulls were impaled in rows or columns of wooden stakes. Even so, some evidence of genuine trepanation in Mesoamerica (i.e., where the subject was living) has survived.[citation needed]

The earliest archaeological survey published of trepanated crania was a late 19th-century study of several specimens recovered from the Tarahumara mountains by the Norwegian ethnographer Carl Lumholtz.[13][14] Later studies documented cases identified from a range of sites in Oaxaca and central Mexico, such as Tilantongo, Oaxaca and the major Zapotec site of Monte Albán. Two specimens from the Tlatilco civilization's homelands (which flourished around 1400 BC) indicate the practice has a lengthy tradition.[15]

A study of ten low-status burials from the Late Classic period at Monte Albán concluded that the trepanation had been applied non-therapeutically, and, since multiple techniques had been used and since some people had received more than one trepanation, concluded it had been done experimentally.[citation needed] Inferring the events to represent experiments on people until they died, the study interpreted that use of trepanation as an indicator of the stressful sociopolitical climate that not long thereafter resulted in the abandonment of Monte Alban as the primary regional administrative center in the Oaxacan highlands.[citation needed]

Specimens identified from the Maya civilization region of southern Mexico, Guatemala and the Yucatán Peninsula show no evidence of the drilling or cutting techniques found in central and highland Mexico. Instead, the pre-Columbian Maya apparently used an abrasive technique that ground away at the back of the skull, thinning the bone and sometimes perforating it, similar to the examples from Cholula. Many skulls from the Maya region date from the Postclassic period (ca. 950–1400), and include specimens found at Palenque in Chiapas, and recovered from the Sacred Cenote at the prominent Postclassic site of Chichen Itza in northern Yucatán.[16]

Trepanation was also practiced in the classical and Renaissance periods. Hippocrates gave specific directions on the procedure from its evolution through the Greek age, and Galen also elaborates on the procedure. During the Middle Ages and the Renaissance, trepanation was practiced as a cure for various ailments, including seizures and skull fractures. Out of eight skulls with trepanations from the 6th to 8th centuries found in southwestern Germany, seven skulls show clear evidence of healing and survival after trepanation suggesting that the survival rate of the operations was high and the infection rate was low.[5]

In the graveyards of pre-Christian (Pagan) Magyars, archeologists found a surprisingly high frequency (12.5%) of skulls with trepanation, although more than 90% only partial (these served probably ritual purposes).[17] The trepanation was performed on adults only, with similar frequencies for males and females, but increasing frequency with age and wealth. This custom suddenly disappears with the onset of Christian era.

The prefrontal leucotomy, a precursor to lobotomy, was performed by cutting a trephine hole into the skull, inserting an instrument, and destroying parts of the brain.[18] This was later made unnecessary by the development of the "orbital transit" lobotomy where a spike was inserted through the eye-sockets.[19]

Trepanation is a treatment used for epidural and subdural hematomas, and for surgical access for certain other neurosurgical procedures, such as intracranial pressure monitoring. Modern surgeons generally use the term craniotomy for this procedure. The removed piece of skull is typically replaced as soon as possible. If the bone is not replaced, then the procedure is considered a craniectomy. Trepanation instruments are now available with diamond-coated rims, which are less traumatic than the classical trephines with sharp teeth. They are smooth to soft tissues and cut only bone.[20]

Although regarded as pseudoscience by the mainstream medical community, the practice of trepanation for other claimed medical benefits continues. Moreover, some proponents [21] point to recent research[where?] on the increase in cranial compliance following on trepanation, with resulting increase in blood flow,[22] as providing some justification for the practice. Individuals have practiced non-emergency trepanation for psychic purposes. A prominent proponent of the modern view is Peter Halvorson, who drilled a hole in the front of his own skull to increase "brain blood volume".[8]

The most prominent folk theory for the benefits of self-trepanation is offered by Bart Huges, alternatively spelled Bart Hughes and sometimes called "Dr. Bart Hughes", although he is not a doctor but rather a librarian by trade. He was better known for his advocacy of drug use and trepanation and in 1965 he drilled a hole in his own head with a dentist drill as a publicity stunt. Hughes claims that trepanation increases "brain blood volume" and thereby enhances cerebral metabolism in a manner similar to cerebral vasodilators such as ginkgo biloba. No published results have supported these claims.

In a chapter of his book, Eccentric Lives & Peculiar Notions, John Michell cites Huges as pioneering the idea of trepanation in his 1962 monograph, Homo Sapiens Correctus, which is most often cited by advocates of self-trepanation. Among other arguments, Huges contends that children have a higher state of consciousness and since children's skulls are not fully closed one can return to an earlier, childlike state of consciousness by self-trepanation. Further, by allowing the brain to freely pulsate Huges argues that a number of benefits will accrue.

Michell quotes a book called Bore Hole written by Joey Mellen. At the time the passage below was written, Joey and his partner, Amanda Feilding, had made two previous attempts at trepanning Mellen. The second attempt ended up placing Mellen in the hospital, where he was reprimanded severely and sent for psychiatric evaluation. After he returned home, Mellen decided to try again. He describes his third attempt at self-trepanation:

After some time there was an ominous sounding schlurp and the sound of bubbling. I drew the trepan out and the gurgling continued. It sounded like air bubbles running under the skull as they were pressed out. I looked at the trepan and there was a bit of bone in it. At last!

Feilding also performed a self-trepanation with a drill, while Mellen shot the operation for the short film "Heartbeat in the Brain", which was long thought to have been lost. Portions of the film can be seen in the documentary A Hole in the Head.

Michell also describes a British group that advocates self-trepanation to allow the brain access to more space and oxygen. Other modern practitioners of trepanation claim that it holds other medical benefits, such as a treatment for depression or other psychological ailments. In 2000, two men from Cedar City, Utah were prosecuted for practicing medicine without a license after they performed a trepanation on an English woman to treat her chronic fatigue syndrome and depression.[23]