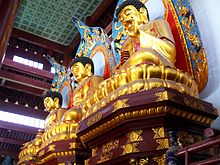 The doctrine says that a Buddha has three kāyas or bodies:

Even before the Buddha's parinirvāṇa, the term Dhammakāya was current. Dhammakāya literally means Truth body.

In the Pāli Canon the Buddha tells Vasettha that the Tathāgata (the Buddha) was Dhammakāya, the 'Truth-body' or the 'Embodiment of Truth', as well as Dhammabhuta, 'Truth-become', 'One who has become Truth' [2][3]

The Buddha is equated with the Dhamma:

The Dharmakāya doctrine was possibly first expounded in the Aṣṭasāhasrikā Prajñāpāramitā "The Perfection of Wisdom In Eight Thousand Verses", composed in the 1st century BCE.

Mahayana Buddhism introduced the Sambhogakāya, which conceptually fits between the Nirmāṇakāya (the manifestations of enlightenment in the physical world)[note 1] and the Dharmakaya. The Sambhogakaya is that aspect of the Buddha, or the Dharma, that one meets in visions and in deep meditation. It could be considered an interface with the Dharmakaya.

Around 300 CE, the Yogacara school systematized the prevalent ideas on the nature of the Buddha in the Trikaya or three-body doctrine.[5]

Schools have different ideas about what the three bodies are.[6][7]

The Three Bodies of the Buddha from the point of view of Pure Land Buddhist thought can be broken down like so:[8]

As with earlier Buddhist thought, all three forms of the Buddha teach the same Dharma, but take on different forms to expound the truth.

According to Schloegl, in the Zhenzhou Linji Huizhao Chansi Yulu, the Three Bodies of the Buddha are not taken as absolute. They would be "mental configurations" that "are merely names or props" and would only perform a role of light and shadow of the mind.[9][note 2]

The term is also known in Gelug teachings, where it is one of the assumed two aspects of the dharmakāya: svābhāvikakāya "essence body" and jñānakāya "body of wisdom".[17]

In dzogchen teachings, "dharmakaya" means the buddha-nature's absence of self-nature, that is, its emptiness of a conceptualizable essence, its cognizance or clarity is the sambhogakaya, and the fact that its capacity is 'suffused with self-existing awareness' is the nirmanakaya.[19]

The interpretation in Mahamudra is similar: When the mahamudra practices come to fruition, one sees that the mind and all phenomena are fundamentally empty of any identity; this emptiness is called dharmakāya. One perceives that the essence of mind is empty, but that it also has a potentiality that takes the form of luminosity.[clarification needed] In Mahamudra thought, Sambhogakāya is understood to be this luminosity. Nirmanakāya is understood to be the powerful force with which the potentiality affects living beings.[20]

In the view of Anuyoga, the 'Mindstream' (Sanskrit: citta santana) is the 'continuity' (Sanskrit: santana; Wylie: rgyud) that links the Trikaya.[1] The Trikāya, as a triune, is symbolised by the Gankyil.

A ḍākinī (Tibetan: མཁའ་འགྲོ་[མ་], Wylie: mkha' 'gro [ma] khandro[ma]) is a tantric deity described as a female embodiment of enlightened energy. The Sanskrit term is likely related to the term for drumming, while the Tibetan term means "sky goer" and may have originated in the Sanskrit khecara, a term from the Cakrasaṃvara Tantra.[21]

Ḍākinīs can also be classified according to the trikāya theory. The dharmakāya ḍākinī, which is Samantabhadrī, represents the dharmadhatu where all phenomena appear. The sambhogakāya ḍākinī are the yidams used as meditational deities for tantric practice. The nirmanakaya ḍākinīs are human women born with special potentialities; these are realized yogini, the consorts of the gurus, or even all women in general as they may be classified into the five Buddha-families.[22]

In the 19th century Theosophy took an interest in Buddhism. It regarded Buddhism to contain esoteric teachings. In those supposed esoteric teachings of Buddhism, "exoteric Buddhism" believes that Nirmanakaya simple means the physical body of Buddha. According to the esoteric interpretation, when the Buddha dies he assumes the Nirmanakaya, instead of going into Nirvana. He remains in that glorious body he has woven for himself, invisible to uninitiated mankind, to watch over and protect it.[23]