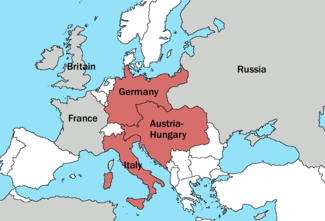 The Triple Alliance was a military alliance among Germany, Austria–Hungary, and Italy. It lasted from 20 May 1882[1][2] until World War I in 1914.[3] Each member promised mutual support in the event of an attack by any other great power, or, in the case of Germany and Italy, an attack by France alone.[4] In a supplementary declaration, Italy specified that its undertakings could not be regarded as being directed against Great Britain. Shortly after renewing the Alliance in June 1902, Italy secretly extended a similar guarantee to France.[1] By a particular agreement, neither Austria–Hungary nor Italy would change the status quo in the Balkans without previous consultation.[lower-alpha 1]

When Austria–Hungary found themselves at war in August 1914 with the rival Triple Entente, Italy pledged to support the Central Powers: Germany, Austria-Hungary, and later the Ottoman Empire (Turkey). However, because Germany and Austria–Hungary had taken the offensive while the Triple Alliance was supposed to have been a defensive alliance, Italy did not enter into the war. Later on, Italy entered the conflict on the side of the Entente, declaring war against Austria–Hungary in May 1915[3] and Germany in August 1916. Carol I of Romania, through his Prime Minister Ion I. C. Brătianu, had also secretly pledged to support the Triple Alliance, but he too remained neutral since Austria-Hungary started the war.[6][7]

The man chiefly responsible for the Triple Alliance was Otto von Bismarck, Chancellor of Germany. Bismarck wanted to prevent a war on two fronts, which is why he targeted these two countries specifically.

By the late 1870s, Austrian territorial ambitions in both the Italian peninsula and Central Europe had been thwarted by the rise of Italy and Germany as new national powers. With the decline and failed reforms of the Ottoman Empire, Slavic discontent in the occupied Balkans grew, and both Russia and Austria–Hungary saw an opportunity to expand in this region. In 1876, Russia offered to partition the Balkans, but Hungarian statesman Gyula Andrássy declined because Austria–Hungary was already a "saturated" state and it could not cope with additional territories.[8] The whole Empire was thus drawn into a new style of diplomatic brinkmanship, first conceived of by Andrássy, centering on the province of Bosnia and Herzegovina, a predominantly Slav area still under the control of the Ottoman Empire.

On the heels of the Great Balkan Crisis, Austro-Hungarian forces occupied Bosnia and Herzegovina in August 1878 and the empire eventually annexed Bosnia and Herzegovina in October 1908 as a common holding under the control of the finance ministry, rather than attaching it to either Austria or Hungary. The occupation of Bosnia-Herzegovina was a step taken in response to Russian advances into Bessarabia. Unable to mediate between Turkey and Russia over the control of Serbia, Austria–Hungary declared neutrality when the conflict between the two powers escalated into the Russo-Turkish War (1877–1878).[8] In order to counter Russian and French interests in Europe, an alliance was concluded with Germany in October 1879 and with Italy in May 1882. World War I started in 1914.

The Kingdom of Italy, like some of the other European powers, wanted to set up colonies and build up an overseas empire. With this aim in mind, Italy joined the German–Austrian Alliance to form the Triple Alliance, partly in anger at the French seizure of Tunisia in 1881 (the so-called Schiaffo di Tunisi by Italian press), which many Italians had seen as a potential colony, and partly to guarantee herself support in case of foreign aggression: the main alliance compelled any signatory country to support the other parties if two other countries attacked. At the time, most European countries tried to ensure similar guarantees, and because of the Tunisian crisis Italy found no other big potential ally than its historical enemy, Austria–Hungary, against which Italy had fought three wars in the 34 years before the first treaty signing.

However, Italian public opinion remained unenthusiastic about their country's alignment with Austria–Hungary, a past enemy of Italian unification, and whose Italian populated districts in the Trentino and Istria were seen as occupied territories by Italian irredentists. In the years before World War I, many distinguished military analysts predicted that Italy would attack its supposed ally in the event of a large scale conflict. Italy's adherence to the Triple Alliance was doubted and from 1903 plans for a possible war against Rome were again maintained by the Austrian general staff.[9] Mutual suspicions led to reinforcement of the frontier and speculation in the press about a war between the two countries into the first decade of the twentieth century.[10] As late as 1911 Count Franz Conrad von Hötzendorf, chief of the Austrian general staff, was advocating a military preemptive strike against Austria's supposed Italian ally.[11] This prediction was strengthened by Italy's invasion and annexation of Libya, bringing it into conflict with the German-backed Ottoman Empire.

Italy's reasoning for not siding with the Central Powers in World War I was that the Triple Alliance was a defensive alliance, but Germany and Austria–Hungary had taken the offensive.