Tripolitania was a separate Italian colony from 1927 to 1934. From 1934 to 1963, Tripolitania was one of three administrative divisions within Italian Libya and the Kingdom of Libya, alongside Cyrenaica to the east and Fezzan to the south. 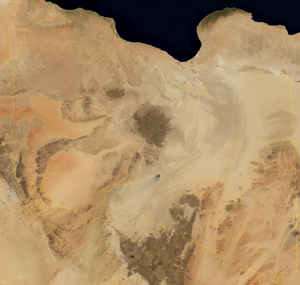 Satellite image of Libya with Tripolitania on the upper left half, showing the green Mediterranean coast in the north and the large desert in the centre and south
File:Tripolitania.jpg
Detailed map of Tripolitania

In the old system, Tripolitania included Tripoli, the capital city of Libya and a vast northwestern portion of the country; in the subsequent systems, the sha'biyah of Tripoli has become much smaller than the original Tripolitania, including merely the city of Tripoli and its immediate surroundings. Because the city and the sha'biyah are nowadays almost coextensive, the term "Tripolitania" has more historical than contemporary value. In Arabic the same word (طرابلس) is used for both the city and the region, and that word, used alone, would be understood to mean only the city; in order to designate Tripolitania in Arabic, a qualifier such as "state", "province" or "sha'biyah" is required.

The system of administrative divisions that included Tripolitania was abolished in the early 1970s in favor of a system of smaller-size municipalities or baladiyat (singular baladiyah). The baladiyat system was subsequently changed many times and has lately become the "Sha'biyat" system. The region that was Tripolitania is now composed of several smaller baladiyat or sha'biyat – see administrative divisions in Libya.

The city of Oea, on the site of modern Tripoli, was founded by the Phoenicians in the 7th century BC. It was conquered by the Greek rulers of Cyrenaica, who were in turn displaced by the Carthaginians. The Greek name Τρίπολις "three cities" referred to Oea, Sabratha and Leptis Magna. The Roman Republic captured Tripolitania in 146 BC, and the area prospered during the Roman Empire period. The Latin name Regio Tripolitania dates to the 3rd century. The Vandals took over in 435, and were in turn supplanted by the Byzantine Empire in the 530s.

In the 7th century, Tripolitania was conquered by the Rashidun Caliphate, and was inherited by its descendants the Umayyads and the Abbasids. The Fatimids, originally vassals of the Abbasids, rebelled in the 10th century, establishing a Caliphate from Tunisia to Syria. In the 1140s, the Normans of Sicily invaded Tripoli, but were ousted by the Almohad Caliphate in 1158. Emir Abu Zakariya, an Almohad vassal, established an independent state in Tunisia in 1229 and took control of Tripolitania shortly after. The Hafsids would control the region until the Ottoman conquest of 1553. 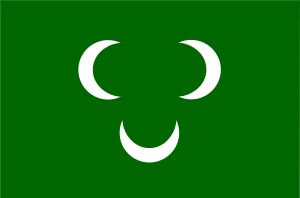 Flag of the Tripolitania Vilayet (1864–1911)
File:Tripolitana COA.svg
Official coat of arms of the Italian Tripolitania 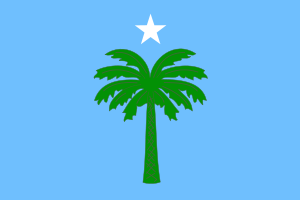 Ottoman Tripolitania (Trablusgarb) extended beyond the region of Tripolitania proper, also including Cyrenaica. Tripolitania became effectively independent under the rulers of the Karamanli dynasty from 1711 until Ottoman control was re-imposed by Mahmud II in 1835. Ottoman rule persisted until 1911–12, when it was captured by Italy in the Italo-Turkish War. Italy officially granted autonomy after the war, but gradually occupied the region.

After World War I, an Arab Republic, Al-Jumhuriya al-Trabulsiya, or "Tripolitanian Republic", declared the independence of Tripolitania from Italian Libya. The proclamation of the Tripolitanian Republic in autumn 1918 was followed by a formal declaration of independence at the 1919 Paris Peace Conference. This was the first formally declared republican form of government in the Arab world, but it gained little support from international powers, and disintegrated by 1923. Italy managed to establish full control over Libya by 1930. Originally administered as part of a single colony, Italian Tripolitania was a separate colony from 26 June 1927 to 3 December 1934, when it was merged into Libya.

The Italian fascists constructed the Marble Arch as a form of an imperial triumphal arch at the border between Tripolitani and Cyrenaica near the coast.

During World War II Libya was occupied by the Allies and from 1942 until 1951, when Libya gained independence, Tripolitania and the region of Cyrenaica were administered by the British Military Administration. Italy formally renounced its claim upon the territory in 1947.

Tripolitania retained its status as a province in the Kingdom of Libya from 1951 to 1963, when it was replaced by a new system of governorates, which divided Tripolitania into the governorates of Khoms, Zawiya, Jabal al Gharbi, Misrata, and Tarabulus.

Ancient episcopal sees of the late Roman province of Tripolitania listed in the Annuario Pontificio as titular sees:[3]

The majority of the population in Tripolitania is of Arab-Berber ancestry. Communities of Berber-speakers lives in the Jebel Nafusa region, the town of Zuwara on the coast, and the city-oases of Ghadames.