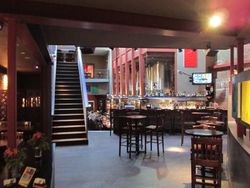 Renovation of the Princeton, New Jersey, location began in the spring of 1994 and opened to the public on March 19, 1995. The first purpose-built brewpub in the state, the 12,000-square-foot (1,100 m2) facility features 30-foot-high (9.1 m) cathedral ceilings, seating for over 275 people, and a two-story, glass-enclosed brewhouse. The non-automated 11-barrel stainless steel brewery was fabricated by Newlands Systems of Abbotsford, British Columbia. Dubbed the largest and "grandest" brewpub in the state,[1] it is said to have the "most architecturally striking interior" of any in New Jersey. The brewing equipment is behind the bar and visible to patrons, and the decor is industrial chic. The brewpub "has long produced more beer than any" other in the state.[2]

Triumph's second location opened April 24, 2003, at Union Square in New Hope, Pennsylvania. Located on the site of a redeveloped Union Camp Corporation paper bag manufacturing facility, this building formerly served as storage for massive bulk rolls of paper. It is adjacent to the historic New Hope and Ivyland Railroad station and the James A. Michener Art Museum.

The Princeton and New Hope locations were designed by Richardson Smith Architects. The Philadelphia location was designed by Riscala Design.