From Infogalactic: the planetary knowledge core
Jump to: navigation, search
This article is about the educational syllabus. For the band, see Trivium (band). For other uses, see Trivium (disambiguation). 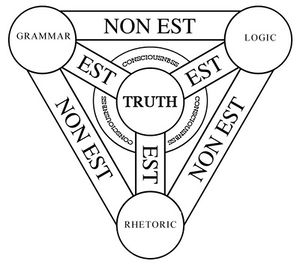 Shield of the Trinity representation of the trivium.

The Trivium is a systematic method of critical thinking used to derive factual certainty from information perceived with the traditional five senses: sight, sound, taste, touch, and smell. In the medieval university, the trivium was the lower division of the seven liberal arts, and comprised grammar, logic, and rhetoric (input, process, and output).[1]

Etymologically, the Latin word trivium means "the place where three roads meet" (tri + via); hence, the subjects of the trivium are the foundation for the quadrivium, the upper division of the medieval education in the liberal arts, which comprised arithmetic (number), geometry (number in space), music (number in time), and astronomy (number in space and time). Educationally, the trivium and the quadrivium imparted to the student the seven liberal arts of classical antiquity.[1]

The trivium is implicit in the De nuptiis Philologiae et Mercurii ("On the Marriage of Philology and Mercury"), by Martianus Capella, although the term was not used until the Carolingian Renaissance, when the term was coined, in imitation of the earlier quadrivium.[2] Grammar, logic, and rhetoric were essential to a classical education, as explained in Plato's dialogues. Together, the three subjects were included to and denoted by the word "trivium" during the Middle Ages, but the tradition of first learning those three subjects was established in ancient Greece. Contemporary iterations have taken various forms, including those found in certain British and American universities (some being part of the Classical education movement) and at the independent Oundle School, in the United Kingdom.[3]

Grammar teaches the mechanics of language to the student. This is the step where the student "comes to terms", i.e. defining the objects and information perceived by the five senses. Hence, the Law of Identity: a tree is a tree, and not a cat.

Logic (also dialectic) is the "mechanics" of thought and of analysis; the process of identifying fallacious arguments and statements, and so systematically removing contradictions, thereby producing factual knowledge that can be trusted.

Rhetoric is the application of language in order to instruct and to persuade the listener and the reader. It is the knowledge (grammar) now understood (logic) being transmitted outwards, as wisdom (rhetoric).

In The Trivium: The Liberal Arts of Logic, Grammar, and Rhetoric (2002), Sister Miriam Joseph thus described the Trivium:

In the Dictionary of Word Origins (1990), John Ayto said that study of the trivium (grammar, logic, and rhetoric) was requisite preparation for study of the quadrivium (arithmetic, geometry, music, and astronomy). For the medieval student, the trivium was the curricular beginning of the acquisition of the seven liberal arts; as such, it was the principal undergraduate course of study. From that contrast, between the simpler trivium and the difficult quadrivium, arose the word trivial.[5]