Tshwane University of Technology (TUT) is a higher education institution in South Africa that came into being through a merger of three technikons — Technikon Northern Gauteng, Technikon North-West and Technikon Pretoria.

As the number of students registering annually grows rapidly, records show that Tshwane University of Technology caters for approximately 60,000 students and it has become the largest residential higher education institution in South Africa.[citation needed] 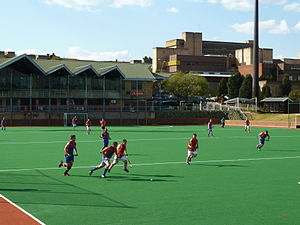 Hockey match at the Pretoria campus

It comprises up to six satellite campuses. These campuses include Pretoria, Soshanguve, Ga-Rankuwa, Witbank (eMalahleni), Nelspruit and Polokwane campuses. Two faculties, namely the Faculties of Science and The Arts, have dedicated campuses in the Pretoria city centre.[1]

There were 48,078 students enrolled for the year 2012 at the Tshwane University of Technology. It was estimated, for the year 2014, that the number of first year student applications the university received were around 80,000.

The United Nations Educational, Scientific and Cultural Organization (UNESCO) ranks the university's Department of Journalism as one of twelve Potential Centres of Excellence in Journalism Training in Africa.