Tulcea (Romanian pronunciation: [ˈtult͡ʃe̯a]) is a county (județ) of Romania, in the historical region Dobruja, with the capital city at Tulcea.

In the Danube Delta there is an important community of Russians and Lipovans. In the south of the county there are communities of Turks. The region once was a centre of Islam in Romania. 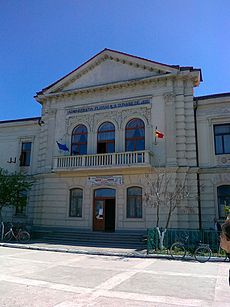 The Palace of the Danube Commission in Sulina, Tulcea County, Romania, from 1868 to 1921

The most significant feature of Tulcea County is the Danube Delta, which occupies about 1/3 of the entire surface and is located in the North-East side of the county. The Delta has three main branches: the Sulina branch (the only one navigable by large ships) in the middle, the Chilia branch in the North (the border with Ukraine) and the Sfântu Gheorghe branch (Saint George) in the South.

In the South-East of the county there are two lagoons: Razelm Lake and Sinoe Lake. In the Danube Delta and in the South—in the area between the Sfântu Gheorghe Channel and Razelm Lake—there are countless channels and small lakes. The entire area is included in the UNESCO list of World Heritage Sites and Biosphere reserves.

The Danube River flows around the county in the West and North side. In the West there is the Măcin Branch which flows on the East side of the Great Brăila Island. From Smârdan (on the opposite side from Brăila) to Pătlăgeanca (close to Tulcea), the Danube has only one big flow of water, around which there are an immense number of lakes and small channels.

In the center of the county there is the Casincea Plateau and the Măcin Mountains—the remains of a prehistorical mountains range (more than 400 million years old), with the greatest height at about 400 m. 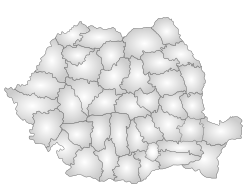 Agriculture and fishing are the main occupations, involving about 48% of the population. Industry is concentrated in the large towns only.

Tourism is an important activity in the county, the Danube Delta being one of the most visited areas in Romania.

The main destinations for tourists are:

The Tulcea County Council, elected at the 2012 local government elections, is made up of 30 councilors, with the following party composition: 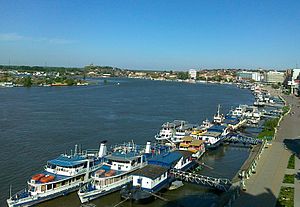