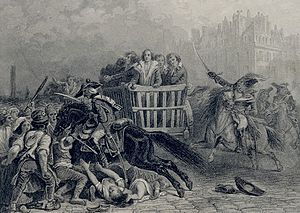 A tumbrel conveying prisoners to the guillotine (19th-century illustration)

A tumbrel (alternatively tumbril), is a two-wheeled cart or wagon typically designed to be hauled by a single horse or ox. Their original use was for agricultural work; in particular they were associated with carrying manure. Their most notable use was taking prisoners to the guillotine during the French Revolution.[1][2] They were also used by the military for hauling supplies.[2] In this use the carts were sometimes covered. The two wheels allowed the cart to be tilted to more easily discharge its load.[3][2] The word is also used as a name for the cucking-stool and for a type of balancing scale used in medieval times to check the weight of coins.[4]