The Tupolev Tu-16 (NATO reporting name: Badger)[3] was a twin-engined jet strategic bomber used by the Soviet Union. It has flown for more than 40 years, and the Chinese licence-built Xian H-6 remains in service with the People's Liberation Army Air Force. 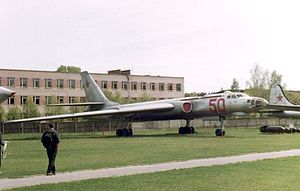 Tu-16 bomber at the Monino Museum.

In the late 1940s, the Soviet Union was strongly committed to matching the United States in strategic bombing capability. The Soviets' only long-range bomber at the time was Tupolev's Tu-4 'Bull', a reverse-engineered version of the American B-29 Superfortress. The development of the extremely powerful Mikulin AM-3 turbojet led to the possibility of a large, jet-powered bomber.

The Tupolev design bureau began work on the Tu-88 ("Aircraft N") prototypes in 1950. The Tu-88 first flew on 27 April 1952. After winning a competition against the Ilyushin Il-46, it was approved for production in December 1952. The first production bombers entered service with Frontal Aviation in 1954, receiving the service designation Tu-16. It received the NATO reporting name Badger-A. 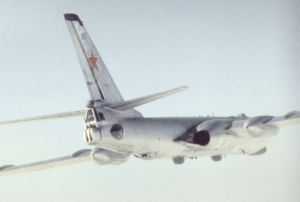 Although the Tu-16 began as a high-altitude, free-fall bomber, in the mid-1950s it was equipped to carry early Soviet cruise missiles. The Tu-16KS-1 (Badger-B) version could carry AS-1 missiles over a combat radius of 1,800 km (1,125 mi). These very large weapons were aerodynamically similar to the Mikoyan-Gurevich MiG-15 fighter, fitted with either a nuclear or conventional warhead, had a range of about 140 km (90 mi). They were intended for use primarily against US Navy aircraft carriers and other large surface ships. Subsequent Tu-16s were converted to carry later, more advanced missiles, while their designations changed several times. 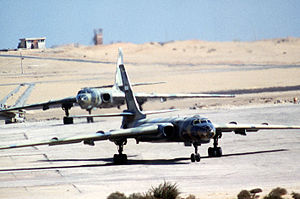 A versatile design, the Tu-16 was built in numerous specialized variants for reconnaissance, maritime surveillance, electronic intelligence gathering (ELINT), and electronic warfare (ECM). A total of 1,507 aircraft were constructed in three plants in the Soviet Union, in 1954–1962. A civilian adaptation, the Tupolev Tu-104, saw passenger service with Aeroflot. The Tu-16 was also exported to Indonesia, Egypt, and Iraq. It continued to be used by the Air Forces and naval aviation of the Soviet Union and subsequently Russia until 1993.

Delivery of the Tu-16 to China began in 1958, and the Xi'an Aircraft Industrial Corporation (XAC) license produced under the Chinese designation Xian H-6. At least 120 of these aircraft remain in service. On 14 May 1965, one of the PLAAF Tu-16 bombers carried out the first airborne nuclear weapon test inside China.[4]

Among the main production variants of the Badger were the Tu-16 and Tu-16A bombers; Tu-16KS and Tu-16K-10 missile carriers; Tu-16SPS, "Elka", and Tu-16Ye ECM aircraft; Tu-16R reconnaissance aircraft; and Tu-16T torpedo bomber; others were produced from conversions. Individual aircraft could be modified several times, with designations changed, especially concerning missile-carrying aircraft. 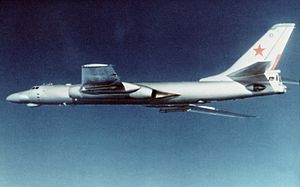 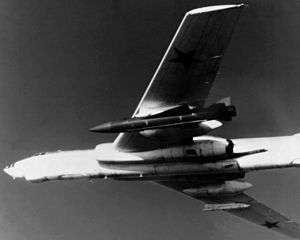 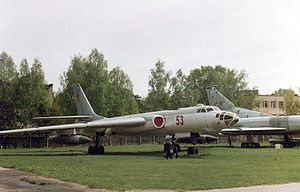 Current operators of the Tu-16/H-6 in bright red, former operators in dark red 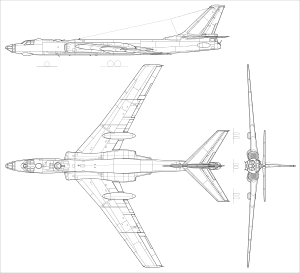