The Tupolev Tu-22M (Russian: Туполев Ту-22М; NATO reporting name: Backfire) is a supersonic, variable-sweep wing, long-range strategic and maritime strike bomber developed by the Tupolev Design Bureau. According to some sources, the bomber was believed to be designated Tu-26 at one time. During the Cold War, the Tu-22M was operated by the Soviet Air Force (VVS) in a strategic bombing role, and by the Soviet Naval Aviation (Aviacija Vojenno-Morskogo Flota, AVMF) in a long-range maritime anti-shipping role.[2] Significant numbers remain in service with the Russian Air Force, and as of 2014 more than 100 Tu-22Ms are in use.[3] 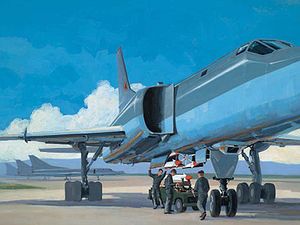 A painting depicting the loading of Raduga Kh-15 missiles on a Tu-22M rotary launcher. The bomber depicted is an early Tu-22M2, with distinctive air intakes.

In 1962, with the introduction of the Tu-22, it became increasingly clear that the aircraft was considerably inadequate in its role as a bomber. In addition to widespread unserviceability and maintenance issues, the Tu-22’s handling characteristics proved to be dangerous. Its landing speed was some 100 km/h (60 mph) greater than previous bombers and it had a tendency to pitch up and strike its tail upon landing. It was difficult to fly, and had poor all-round visibility.[4] In 1962, Tupolev commenced work on major update of the Tu-22. Initially, the bureau planned to add a variable-sweep wing and upgraded engines into the updated design. The design was tested at TsAGI’s wind tunnels at Zhukovsky.[4]

During this time, Sukhoi, traditionally a designer of fighter aircraft, developed the T-4, a four-engine titanium aircraft with canards. A response to the XB-70, it was to have a cruise speed of 3,200 km/h (2,000 mph), requiring a massive research effort in order to develop the requisite technologies. Not to be outdone, Tupolev, whose expertise is with bombers, offered the Soviet Air Force (Voyenno-Vozdushnye Sily, VVS) a massively-updated version of the Tu-22.[5]

Compared to the T-4, it was an evolutionary design, and thus its appeal laid in its simplicity and low cost. However, the Soviet government was sceptical about the need to approve the development of a replacement aircraft so soon after the Tu-22 had just entered service.[6] The Air Force and Tupolev, in order to save face with regards to the Tu-22’s operational deficiencies and to stave off criticisms from the ICBM lobby, agreed to pass off the design as an update of the Tu-22 in their discussions with the government. The aircraft was designated Tu-22M, given the OKB code "Aircraft 45", and an internal designation of "AM". Their effort was successful as the government approved the design on 28 November 1967, and decreed the development of the aircraft's main weapon, the Kh-22.[7] The T-4 itself would make its first flight in 1972, but was later cancelled.[5]

As in the case of its contemporaries, the MiG-23 and Su-17 projects, the advantages of variable-sweep wing (or "swing wing") seemed attractive, allowing a combination of short take-off performance, efficient cruising, and good high-speed, low-level flight. The result was a new swing wing aircraft named Samolyot 145 (Aeroplane 145), derived from the Tupolev Tu-22, with some features borrowed from the abortive Tu-98. The Tu-22M was based on the Tu-22's weapon system and used its Kh-22 missile. The Tu-22M designation was used to help get approval for the bomber within the Soviet military and government system.[9]

The Tu-22M designation was used by the Soviet Union during the SALT II arms control negotiations, creating the impression that it was a modification of the Tu-22. Some suggested that the designation was deliberately deceptive, and intended to hide the Tu-22M's performance. Other sources suggest the "deception" was internal to make it easier to get budgets approved. According to some sources, the Backfire-B/C production variants were believed to be designated Tu-26 by Russia, although this is disputed by many others. The US State and Defense Departments have used the Tu-22M designation for the Backfire.[10]

Production of all Tu-22M variants totalled 497 including pre-production aircraft.[2]

In 2014, Russian aerospace expert Piotr Butowski estimated there were seven squadrons of Tu-22Ms in service, each with approximately 10 aircraft, stationed at three airbases; 40 at Belaya airbase in southeastern Siberia, 28 at Shaykovka airbase southwest of Moscow, and 10 at Dyagilevo airbase in Ryazan southeast of Moscow which serves as the training unit for the bomber. With the deletion of the aircraft's in-flight refueling capability due to the START I treaty, the Tu-22M's internal fuel capacity limits its operational range from its home bases to only around Russia's immediate sphere of influence.[11]

The two prototypes Tu-22M0 were delivered to Long Range Aviation’s 42nd Combat Training Centre at Dyagilevo air base, near Ryazan, in February 1973. The aircraft began practice sorties in March. Within 20 days of the aircraft’s delivery, the air and ground crew at the air base had received their type ratings; this was helped by their earlier training at Tupolev, the Gromov Flight Research Institute and the Kazan plant.[12] In June that year, the aircraft were demonstrated to Soviet government officials, destroying tanks and armoured personnel carriers.[12]

The Tu-22M was first unveiled in 1980 during the aircraft’s participation in a major Warsaw Pact exercise. During the exercise, naval Tu-22M2s conducted anti-ship operations by mining parts of the Baltic Sea to simulate an amphibious landing. The exercise was extensively covered by the press and TV media.[13][14] In June 1981, four Tu-22Ms were intercepted and photographed by Norwegian aircraft flying over the Norwegian Sea.[15]

The first simulated attack by the Tu-22M against a NATO carrier group occurred between 30 September and 1 October 1982. Eight aircraft locked onto the U.S. task forces of USS Enterprise and USS Midway which were operating in the North Pacific. They came within 120 mi (200 km) of the task forces. The reaction of the U.S. Navy was thought to have been restrained during this event so as to allow the observation of the Tu-22M's tactics.[16] The bomber also made attempts to test Japan's air defense boundary on several occasions.

The Tu-22M was first used in combat in Afghanistan. It was deployed December 1987 to January 1988, during which the aircraft flew strike missions in support of the Soviet Army's attempt to relieve the Mujahideens' siege against the city of Khost. Two squadrons of aircraft from the 185th GvBAP based at Poltava were deployed to Maryy-2 air base in Turkmenistan. Capable of dropping large tonnages of conventional ordnance, the aircraft bombed enemy forts, bases and material supplies.[17] In October 1988, the aircraft was again deployed against the Mujahideen. Sixteen Tu-22M3s were used to provide cover to Soviet forces that were pulling out of the country. The Tu-22Ms were tasked with destroying paths of access to Soviet forces, attacking enemy forces at night to prevent regrouping, and to attack incoming supplies from Iran and Pakistan. Working alongside 30 newly arrived MiG-27s, the aircraft also from flew missions aimed at relieving the besieged city of Kandahar.[18][19] The aircraft had its last Afghan operation in January 1989 at Salang pass.[20]

The Tu-22M suffered from widespread maintenance issues during its service with the Soviet forces. These stemmed from poor manufacturing quality. The engines and airframes in particular had low service lives.[21] The Air Force at one point sought to have Tupolev prosecuted for allegedly rushing the inadequate designs of the Tu-22M and the Tu-160 into service.[22] This was compounded by the government bureaucracy, which hampered the provision of spare parts to allow the servicing of the Tu-22M. With some aircraft grounded for up to six months, the mission-capable rate of the aircraft in August 1991 hovered around 30–40%.[21][23]

At the time of the dissolution of the Soviet Union, 370 remained in Commonwealth of Independent States service. Production ended in 1993.

The Russian Federation used the Tu-22M3 in combat in Chechnya during 1995, performing strikes near Grozny.[2]

The Russian military acknowledged the loss of a Tu-22MR recon aircraft to Georgian air defences early in the 2008 South Ossetia war.[26][27] One of its crew members was captured (Major Vyacheslav Malkov), two others were killed and the crew commander, Lt. Col. Aleksandr Koventsov, was missing in action[28] as late as November 2011.[29] 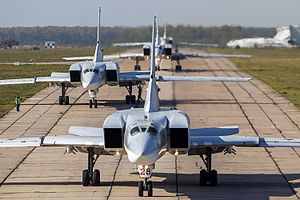 On Good Friday night, 29 March 2013, two Tu-22M3 bombers were flying in international airspace in a simulated attack on Sweden. The Swedish air defense failed to respond.[30][31] Two Tu-22Ms flew supersonic over the Baltic Sea on 24 March 2015.[32] Two Tu-22Ms approached Öland in international airspace on 21 May 2015. The Swedish Air Force sent two Saab JAS 39 Gripen fighters to mark their presence.[33] On 4 July 2015, two Tu-22Ms approached the Swedish island of Gotland, followed by Swedish and other fighter aircraft. The Russian bombers did not enter Swedish territory.[34][importance?] 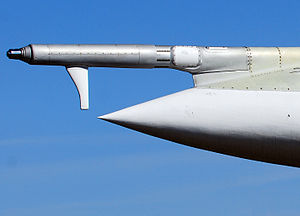 Closeup of refuelling probe on the Tu-22M's nose

The Tupolev company has sought export customers for the Tu-22M since 1992, with possible customers including Iran, India and the People's Republic of China, but no sales have apparently been made. Unlike the Tu-22 bomber, Tu-22Ms were not exported to Middle East countries that posed a threat to the US military presence in the region.[53] During 2001, India signed a lease-to-buy contract for four Tu-22M aircraft for maritime reconnaissance and strike purposes. At the time, the aircraft were expected to be delivered with Raduga Kh-22 cruise missiles.[54][55][56] The deal was later cancelled.[citation needed]

In January 2013, reports emerged that China had signed a purchase agreement for the production and delivery of 36 Tu-22M3s, under the Chinese designation of H-10, with many components to be manufactured domestically in China under a technology transfer agreement with Russia and Tupolev.[57] Sales of the Russian-built Raduga Kh-22 long-range anti-ship missile and the fleet's intended use as a maritime strike platform have also been speculated upon.[58] Rosoboronexport has reportedly denied any sales or negotiations with China regarding the Tu-22M.[59] 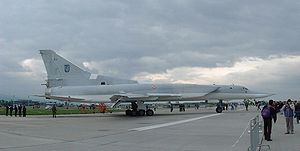 Only nine of the earliest Tu-22M0 pre-production aircraft were produced, followed by nine more Tu-22M1 pilot-production craft in 1971 and 1972. Its NATO reporting name was Backfire-A.

The first major production version, entering production in 1972, was the Tu-22M2 (NATO: Backfire-B), with longer wings and an extensively redesigned, area ruled fuselage (raising the crew complement to four), twin NK-22 engines (215 kN thrust each) with F-4 Phantom II-style intake ramps, and new undercarriage with the main landing gear in the wing glove rather than in large pods. 211 Tu-22M2 were built from 1972 into 1983.[60] The Tu-22M2 had a top speed of Mach 1.65 and was armed most commonly with long-range cruise missiles/anti-ship missiles, typically one or two Raduga Kh-22 anti-shipping missiles.[60] Some Tu-22M2s were later reequipped with more powerful NK-23 engines and redesignated Tu-22M2Ye.

The later Tu-22M3 (NATO: Backfire-C), which first flew in 1977, introduced into operations in 1983[60] had new NK-25 engines with substantially more power, wedge-shaped intake ramps similar to the MiG-25, wings with greater maximum sweep and a recontoured nose housing a new Leninets PN-AD radar and NK-45 nav/attack system, which provides much-improved low-altitude flight. The aerodynamic changes increased its top speed to Mach 2.05 and its range by one third compared to the Tu-22M2.[60] It has a revised tail turret with a single cannon, and provision for an internal rotary launcher for the Raduga Kh-15 missile, similar to the American AGM-69 SRAM. It was nicknamed Troika ('Trio' or third) in Russian service. 268 were built till 1993.[61][62][60]

As built, the Tu-22M included the provision for a retractable probe in the upper part of the nose for aerial refueling. The probe was reportedly removed as a result of the SALT negotiations, because with refueling it was considered an intercontinental range strategic bomber.[63] The probe can be reinstated if needed.[2][64]

Several Tu-22M3s, perhaps 12, were converted to Tu-22M3(R) or Tu-22MR standard with Shompol side looking airborne radar and other ELINT equipment.[2]

Tu-22M3M: Tu-22M3 for RuAF with upgraded avionics and the ability to use precision air-to-surface weapons. Prior to 2020 it is planned to upgrade 30 Tu-22M3 with new hardware components and adapted for the extended range weapons.[65] 5 modernized aircraft entered service in 2015.[66][67][68] 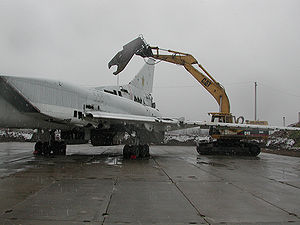 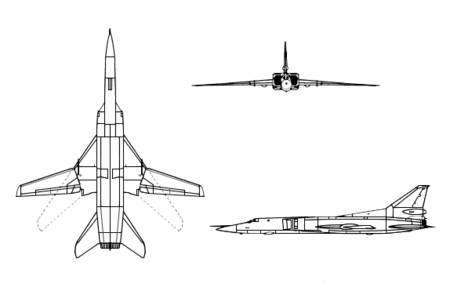 Orthographic projection of the Tupolev Tu-22M 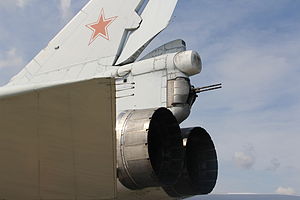 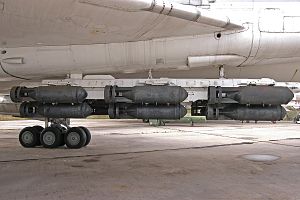 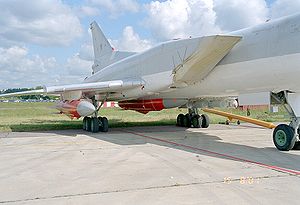