Russian Turkestan (Russian: Русский Туркестан, Russkiy Turkestan) was the western part of Turkestan within the Russian Empire (administered as a Krai or Governor-Generalship), comprising the oasis region to the south of the Kazakh steppes, but not the protectorates of the Emirate of Bukhara and the Khanate of Khiva. 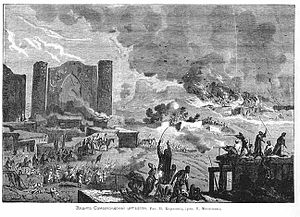 The Defence of the Samarkand Citadel in 1868 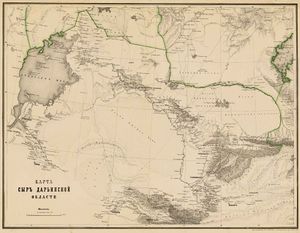 Although Russia had been pushing south into the steppes from Astrakhan and Orenburg since the failed Khivan expedition of Peter the Great in 1717, the beginning of the Russian colonial conquest of Turkestan is normally dated to 1865. That year the Russian forces took the city of Tashkent[1] under the leadership of General Mikhail Chernyayev expanding the territories of Turkestan Oblast (part of Orenburg Governorate-General). Chernyayev had exceeded his orders (he only had 3,000 men under his command at the time) but Saint Petersburg recognized the annexation in any case. This was swiftly followed by the conquest of Khodzhent, Dzhizak and Ura-Tyube, culminating in the annexation of Samarkand and the surrounding region on the Zeravshan River from the Emirate of Bukhara in 1868 forming the Zeravsh Special Okrug of Turkestan.

In 1867 Turkestan was made a separate Governor-Generalship, under its first Governor-General, Konstantin Petrovich Von Kaufman. Its capital was Tashkent and it consisted initially of three oblasts (provinces): Syr Darya, Semirechye Oblast and the Zeravshan Okrug (later Samarkand Oblast). To these were added in 1873 the Amu Darya Division (Russian: отдел, otdel), annexed from the Khanate of Khiva, and in 1876 the Fergana Oblast, formed from the remaining rump of the Kokand Khanate that was dissolved after an uprising in 1875. In 1894 the Transcaspian Region, which had been conquered in 1881–1885 by Generals Mikhail Skobelev and Mikhail Annenkov, was added to the Governor-Generalship.

The administration of the region had an almost purely military character throughout. Von Kaufman died in 1882, and a committee under Fedor Karlovich Giers (or Girs, brother of the Russian Foreign Minister Nikolay Karlovich Giers) toured the Krai and drew up proposals for reform, which were implemented after 1886. In 1888 the new Trans-Caspian railway, begun at Uzun-Ada on the shores of the Caspian Sea in 1877, reached Samarkand. Nevertheless, Turkestan remained an isolated colonial outpost, with an administration that preserved many distinctive features from the previous Islamic regimes, including Qadis' courts and a 'native' administration that devolved much power to local 'Aksakals' (Elders or Headmen). It was quite unlike European Russia. In 1908 Count Konstantin Konstantinovich Pahlen led another reform commission to Turkestan, which produced in 1909–1910 a monumental report documenting administrative corruption and inefficiency. The Jadid educational reform movement which originated among Tatars spread among Muslims of Central Asia under Russian rule.

In 1897 the railway reached Tashkent, and finally in 1906 a direct rail link with European Russia was opened across the steppe from Orenburg to Tashkent. This led to much larger numbers of ethnic Russian settlers flowing into Turkestan than had hitherto been the case, and their settlement was overseen by a specially created Migration Department in Saint Petersburg (Переселенческое Управление). This caused considerable discontent amongst the local population as these settlers took scarce land and water resources away from them. In 1916 discontent boiled over in the Basmachi Revolt, sparked by a decree conscripting the natives into labour battalions (they had previously been exempt from military service). Thousands of settlers were killed, and this was matched by Russian reprisals, particularly against the nomadic population. Order had not really been restored by the time the February Revolution took place in 1917. This would usher in a still bloodier chapter in Turkestan's history, as the Bolsheviks of the Tashkent Soviet (made up entirely of Russian soldiers and railway workers, with no Muslim members) launched an attack on the autonomous Jadid government in Kokand early in 1918, which left 14,000 dead. Resistance to the Bolsheviks by the local population (dismissed as 'Basmachi' or 'Banditry' by Soviet historians) continued well into the beginning of the 1930s. 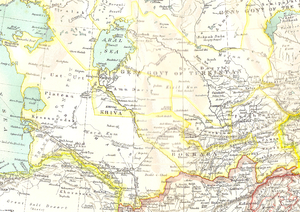 The borders of the Russian imperial territories of Kiva, Bukhara and Kokand in the time period of 1902–1903.

Turkestan was divided into five oblasts.