Turkey in the Eurovision Song Contest 2007 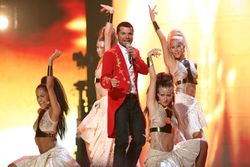 Doğulu submitted three songs to TRT as promised. The members of the selection committee, together with the singer and composer Doğulu decided for "Shake It Up Şekerim", a cheerful uptempo song. Doğulu said that he made several songs, including 7-8 which he loved a lot: "It was very difficult to shorten the list to three songs. We have chosen a cheerful up-tempo song. May it bring us luck".

After some changes to the song, it was made public on the March 9, 2007. Doğulu toured several countries in order to drum up support for his Eurovision entry including some countries who are known for not voting for Turkey that often. These countries include Russia, Cyprus, Estonia and some others.

The song finished in 4th position in the contest, scoring 163 points.