The Turkish Air Force (Turkish: Türk Hava Kuvvetleri) is the aerial warfare service branch of the Turkish Armed Forces. The Turkish Air Force can trace its origins back to June 1911 when it was founded by the Ottoman Empire,[9] however, the air force as it is known today did not come into existence until 1923 with the creation of the Republic of Turkey.[10]

According to Flight International (Flightglobal.com) and the International Institute for Strategic Studies, the Turkish Air Force has an active strength of 60,000 military personnel and operates approximately 668 manned aircraft (2014).[5][6]

The history of Ottoman military aviation dates back to between June 1909 and July 1911.[11] The Ottoman flight squadrons participated in the Balkan Wars (1912–1913) and World War I (1914–1918).[2][12] The fleet size reached its apex in December 1916, when the Ottoman aviation had 90 active combat aircraft. Some early help for the Ottoman Air Force came from the Imperial German Fliegertruppe (known by that name before October 1916), with future Central Powers 13-victory flying ace Hans-Joachim Buddecke flying with the Turks early in World War I as just one example.[13] The General Inspectorate of Air Forces (Kuva-yı Havaiye Müfettiş-i Umumiliği) trying to reconstruct itself on July 29, 1918 had no personnel, but only remained as a title on paper.[2]

After the end of World War I and the occupation of the Ottoman Empire by the Allies in 1919, some Turkish aviators tried to build new units in Istanbul, İzmir, Konya, Elazığ and Diyarbakır with planes left over from World War I and tried to bring together flight personnel.[2] During the Turkish War of Independence, Turkish pilots joined the Konya Air Station (Konya Hava İstasyonu). With the formation of the Grand National Assembly (GNA) by Mustafa Kemal and his colleagues on April 23, 1920, in Ankara, and the reorganization of the army, the Branch of Air Forces (Kuva-yı Havaiye Şubesi) was established under the Office of War (Harbiye Dairesi) of the GNA.[2] A few damaged aircraft belonging to the GNA were repaired, and afterwards used in combat.

After the proclamation of independence and sovereignty with the Treaty of Lausanne and the establishment of the Republic of Turkey on 29 October 1923, approaches were made to form a modern Air Force. Originally consisting of 3 normal and 1 naval aviation units, and an air school, the number of units was increased to 10 normal and 3 naval aviation units.[15] Starting in 1924, personnel were sent abroad for flight education.[15] In 1925 the Air School was reestablished in Eskişehir and its first students graduated in that same year.[15] The Inspectorate of Air Forces was reorganized as Underdecretariat of the Ministry of Defense in 1928 and new schools were found for non-pilot personnel.[15] Some personnel were sent to United Kingdom and France for training; others were sent to the United States and Italy in 1930.[15]

On July 1, 1932, air regiments were considered to be a separate combat arm and started training its own personnel.[15] The Turkish aviators began to wear blue uniforms from 1933.[15]

Sabiha Gökçen became the first female fighter pilot in military history in 1937.[16] Another key event in 1937 was the establishment of the Air War College (Hava Harp Akademisi).[15]

By 1940, Turkish air brigades had more than 500 combat aircraft in its inventory, becoming the largest air force in the Balkans and the Middle East.[15] The growing inventory of air brigades required another structural change, which was made in 1940.[15] The Air Undersecretariat under the Ministry of National Defense for logistical affairs and the General Staff for educational affairs were united to form the Air Force Command (Hava Kuvvetleri Komutanlığı) in 1944.[15] Thus, the Air Force became a separate branch of the Turkish Armed Forces.[17] The first Commander of the Turkish Air Force was General Zeki Doğan.[17] Turkey did not enter World War II on the side of the Allies until February 1945. However, the Turkish Armed Forces went on full alert and were prepared for war following the military alliance between neighbouring Bulgaria and the Axis Powers which was formalized in March 1941, and the occupation of neighbouring Greece by the Axis Powers in April 1941. Within a year, Turkey's borders were surrounded by German forces in the northwest and west, and Italian forces in the southwest. The Turkish Air Force made daily reconnaissance flights over Bulgaria, Greece, the Greek Islands in the Aegean Sea, and the Dodecanese Islands which then belonged to Italy, to monitor the positions of the Axis forces. The large cities in western Turkey were darkened at nights, and anti-aircraft guns and searchlights were deployed for defence against possible enemy planes. Almost all available money in the Turkish Government Treasury was used to purchase new weapons from any available provider in the world. The Turkish Air Force received large numbers of new aircraft in this period, including Supermarine Spitfire Mk.I/V/IX/XIX, Curtiss Falcon CW-22R/B, Fairey Battle-I, Avro Anson-I, Hawker Hurricane I/II, Morane-Saulnier M.S.406, Curtiss P-40 Tomahawk, Curtiss P-40 Kittyhawk, Westland Lysander-I, Consolidated B-24D Liberator B-24, Bristol Blenheim IV/V, Bristol Beaufort, Bristol Beaufighter Mk.I/X, Focke Wulf FW-190-A3, Martin 187 Baltimore, De Havilland DH.98 Mosquito Mk.III/IV, Douglas B-26B/C Invader, P-47D Thunderbolt and Douglas C-47A/B Dakota.

The Air Machinist School (Hava Makinist Okulu) was reorganized as Aircraft Maintenance School (Hava Uçak Bakım Okulu) on 2 January 1950[18] to unite schools responsible for training non-pilot Air Force personnel.[17] In 1950 it also was decided to upgrade the Air Force fleet through the inclusion of jets.[17] Eight pilots were sent to the United States for jet pilot training.[17] They graduated in 1951 and started training jet pilots in the Turkish Air Force.[17] In the same year, the 9th Fighter Wing (9uncu Ana Jet Üssü) was founded in Balıkesir as Turkey's first fighter wing; the 191st, 192nd, and 193rd squadrons being the first ones which were established.[17] Further training in the United States followed, usually involving jet manufacturers. In 1951 the Air Force Academy was formed with integrating some air schools in Eskişehir and its fist academic year started on 1 October 1951.[19] In 1956 the Hava Eğitim Kolordu Komutanlığı (Air Education Corps Command) was founded and all education was united under this command. The command was renamed as Hava Eğitim Komutanlığı (Air Education Command) in 1957.[17]

Upon Turkey's membership to NATO in 1952, the process of modernization was accelerated.[17] In 1962 the Taktik Hava Kuvveti (Tactical Air Force) was founded by upgrading the Hava Tümeni (Air Division) units to corps-level organizations. In 1974 the Air Force was employed in the Cyprus War.[17] With the arrival of 3rd generation fighter jets in 1980, the Air Force was reorganized.[17]

Turkey is one of five NATO member states which are part of the nuclear sharing policy of the alliance, together with Belgium, Germany, Italy, and the Netherlands.[21] A total of 90 B61 nuclear bombs are hosted at the Incirlik Air Base, 40 of which are allocated for use by the Turkish Air Force in case of a nuclear conflict, but their use requires the approval of NATO.[22] As of 2010[update], the United States is considering withdrawing these nuclear bombs from Turkey, and from several other foreign locations in Europe.[23]

In 1984 Turkish Aerospace Industries (TAI) was established and Turkey started to produce fighter aircraft locally under license, including a total of 232 F-16 Fighting Falcon (Block 30/40/50) aircraft for the air force. The air force had previously received 8 F-16s that were purchased directly from the United States, bringing the total number of F-16s received by the air force to 240.[31] TAI is currently building 30 new F-16 Block 50+ aircraft for the TuAF[32][33] and is applying a CCIP upgrade on the existing fleet of Block 30/40/50 F-16s, which will bring all of them to the Block 50+ standard.[31][34][35][36] Dozens of TAI-built F-16s were also exported to other countries, particularly in the Middle East. A total of 46 TAI-built F-16s have been exported to the Egyptian Air Force under the Peace Vector IV Program (1993–1995), making it TAI's second-largest F-16 customer after the Turkish Air Force.[37] Turkey is one of only five countries in the world which locally produce the F-16 Fighting Falcon.[31] 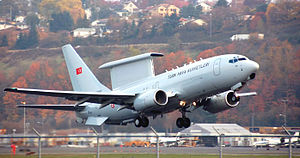 A total of four Boeing 737 AEW&C Peace Eagle (Turkish: Barış Kartalı) aircraft (together with ground support systems) were ordered by the Turkish Air Force, with an option for two more aircraft. Turkish Aerospace Industries (TAI) is the primary subcontractor for the Peace Eagle parts production, aircraft modification, assembly and tests. Another subcontractor, Havelsan, is responsible for system analysis and software support.[38]

Signed on 23 July 2003, the contract to Boeing valued at US$1.385 billion, which was later reduced by US$59 million because some of the requirements were not met. The down payment to Boeing amounted to US$637 million. The project consists of the delivery of 737-700 airframes, ground radars and control systems, ground control segments for mission crew training, mission support and maintenance support.[39]

Peace Eagle 1 is modified and tested by Boeing Integrated Defense Systems in Seattle, Washington, USA. Peace Eagle 2, 3 and 4 are modified and tested at the facilities of TAI in Ankara, Turkey, with the participation of Boeing and a number of Turkish companies. As of 2006, the four Peace Eagle airplanes were scheduled to be delivered in 2008.[40] As of mid-2007, systems integration was ongoing and airworthiness certification works continued. In September 2007, Boeing completed the first test flight of Turkey's AEW&C 737.[41]

On 4 June 2008, it was announced that Turkish Aerospace Industries completed the first in-country modification of a Boeing 737-700 into an airborne early warning and control (AEW&C) platform for Turkey's Peace Eagle program.[42]

The six-year delay was a result of Boeing experiencing difficulties while developing some features required by the Turkish Air Force. Turkey demanded compensation of US$183 million from Boeing for the delay. The payment of the penalty is requested in the form of increased start-up support period from an initially planned two years to five years, as well as three years of software maintenance service and around US$32 million in spare parts.[39] 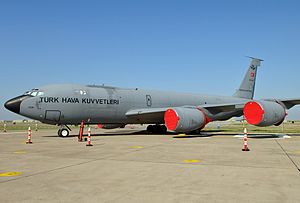 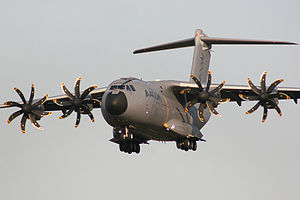 Although the Airbus A400M Atlas is essentially a heavy tactical lift aircraft, it can also be transformed into an aerial refueling tanker aircraft at short notice.

At present, the Turkish Air Force operates MALE UAVs such as the TAI Anka, Bayraktar Tactical UAS, IAI Heron and the I-GNAT ER. Having been unable to purchase the armed version of Predator UCAVs from the United States, Turkey plans to produce armed UCAV versions of TAI Anka (to be fitted with missiles such as the AGM-114 Hellfire and Roketsan Cirit); while TAI has become the leading partner in the Talarion UCAV project of EADS.[55][56][57]

In 2013 Turkey approved the construction by ROKETSAN of its first satellite launching center, initially for low earth orbit satellites.[60]

In 2015, Ukraine and Turkey agreed on space program which worth billions of dollars.[61] 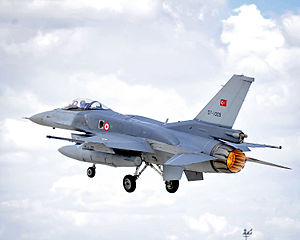 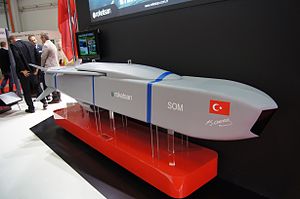 The above commands consist of:[10]

Future of the Turkish Air Force 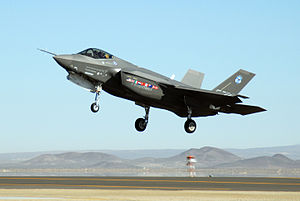 On 28 March 2013, the Turkish Secretary of the Defence Industry of the Ministry of National Defence of Turkey Murat Bayar announced intentions to replace the F-16 fighter with domestically produced fighters by 2023.[67]

Havelsan of Turkey and Boeing of the United States are in the process of developing a next generation, high altitude ballistic missile defence shield. It is envisaged that the system will be used by the U.S., Turkey and other NATO member states.[68][69][70]