The Turkish Straits crisis was a Cold War-era territorial conflict between the Soviet Union and Turkey. Turkey, which had remained officially neutral throughout most of the freshly concluded Second World War, was pressured by the Soviet government to allow Russian shipping to flow freely through the Turkish Straits, which connected the Black Sea to the Mediterranean. As the Turkish government would not submit to the Soviet Union's requests, tensions arose in the region, leading to a show of naval force on the side of the Soviets. The incident would later serve as a deciding factor in the issuing of the Truman Doctrine.[2] At its climax, the tensions would cause Turkey to turn to the United States and NATO, for protection and membership, respectively. This turn of events greatly affected the world influence that Turkey possesses in the present day.

Importance of the straits

The two gateways between the Black Sea and Mediterranean, the Dardanelles and Bosphorus, were very important as a trade route from the Black Sea into ports all over the world for Turkey and its other Black Sea neighbors: the USSR, Romania and Bulgaria, all three of which were militarily aligned.[3] The straits also served as an important component of military strategy; whoever wielded control of traffic through the straits could use them as an exit or entry point for naval forces to traverse to and from the Black Sea.

The conflict has its roots in Soviet-Turkish relations, both just prior to and during the Second World War. Until the last half of the 1930s, Russian-Turkish relations were warm and somewhat fraternal. The previous incarnations of the two nations, the Ottoman Empire and Bolshevist Russia, had promised to cooperate with each other in the Treaty of Moscow.[4]

The Montreux Convention Regarding the Regime of the Straits was convened in 1936, with the nations of Australia, Bulgaria, France, Germany, Greece, Japan, the Soviet Union, Turkey, the United Kingdom and Yugoslavia attending, to determine the handling of the Turkish straits both in military and regulatory ways.[5] It was the latest of several negotiations regarding the two waterways. Previous treaties and conferences had materialized over the spans of the 19th and 20th centuries. The issue had been revived again with the rise of Fascist Italy and its expansionist policies as well as a fear that Bulgaria would take it upon itself to rearm the straits.[6] Upon the treaty's signing, on July 20, 1936, Turkey was permitted to rearm and regulate the straits. The treaty also explicitly forbade the traversing of the straits by ships not belonging to any of the Black Sea states.[7] Throughout the late 1930s and into the 1940s, Stalin repeatedly challenged the agreements reached by the 1936 convention, asking as early as 1939 for an alternative answer. He proposed joint Turkish and Soviet control of the straits.[8] Upon the signing of the Molotov-Ribbentrop Pact with Nazi Germany, Soviet Foreign Minister Vyacheslav Molotov informed his German colleagues of his country's desire to forcefully take control of the straits and establish a military base in their proximity.[9] 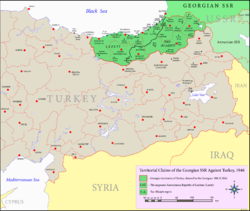 The Soviet Union wished for the Turkish-USSR border within the Eastern Anatolia Region to be normalized in a way beneficial to themselves and the Armenian and Georgian SSRs. Deputy premier Lavrentiy Beria got in Stalin's ear, claiming that Turkish territory to the southwest of Georgia was stolen from the Georgians by the Turks during the Ottoman period. If Beria's purported theory were to be agreed upon by the Turkish, Soviet influence over the Black Sea and Middle East would increase and, in the process, decrease such influence of the British Empire in the latter region.[11] The argument was retracted along with Soviet reservations over the regime of the straits in May 1953.[12]

After the Allied defeat of Nazi Germany, the Soviets returned to the issue in 1945 and 1946. Throughout 1946, American and Turkish diplomats frequently conversed on the issue. The Russians grew angry over Turkey's allowing of non-Black Sea naval vessels to cross the straits during the course of the war and shortly afterwards. The April 6, 1946 visit of the American battleship USS Missouri further angered the Soviets. The ship had come to the region under the explanation that it was delivering the mortuary urn of the late Turkish Ambassador home, a claim which was dismissed by the Soviets as coincidental.[13]

On August 7, 1946, the Soviets presented a note to the Turkish Foreign Ministry which expressed that the way Turkey was handling the straits no longer represented the security interests of its fellow Black Sea nations. This drew attention to the occasions in which Italian and German warships had passed through the straits without conflict (the German ships were only arrested by Turkish forces once the country declared war on Germany on February 23, 1945). The note concluded that the regime of the straits was no longer reliable and demanded that the Montreux Treaty be re-examined and rewritten in a new international conference.[14]

When the issue was brought up at the Potsdam Conference, the President of the United States, Harry S. Truman, said the question of the straits was a domestic political issue pertaining to Turkey and the USSR, and should be solved by the two involved parties.[15] As the argument heated up in the days proceeding Potsdam, the United States decided it firmly did not want the straits to fall into Soviet hands, as it would give them a major strategic gateway between the Black Sea and Mediterranean and possibly lead to a Communist Turkey. In a secret telegram sent by US Under Secretary of State Dean Acheson to diplomats in Paris, he explained the American position on the matter.[16]

In our opinion the primary objective of the Soviet Union is to obtain control over Turkey. We believe that if the Soviet Union succeeds in introducing into Turkey armed forces with the ostensible purpose of enforcing the joint control of the Straits, the Soviet Union will use these forces in order to obtain control over Turkey…. In our opinion, therefore, the time has come when we must decide that we shall resist with all means at our disposal any Soviet aggression and in particular, because the case of Turkey would be so clear, any Soviet aggression against Turkey. In carrying this policy our words and acts will only carry conviction to the Soviet Union if they are formulated against the background of an inner conviction and determination on our part that we cannot permit Turkey to become the object of Soviet aggression.

On August 20, 1946, Undersecretary Acheson met with fifteen journalists to explain the urgency of the situation and make the opinions of the United States Government known.[17]

In the period of months from summer to autumn of 1946, the Soviet Union increased its naval presence in the Black Sea, having Russian vessels perform maneuvers near Turkish shores. A substantial number of ground troops were dispatched to the Balkans. Buckling under the mounting pressure from the Russians, in a matter of days Turkey appealed to the United States for aid. After consulting his administration, President Truman sent a naval task force to Turkey.[18] On October 9, 1946, the respective governments of the United States and United Kingdom reaffirmed their support for Turkey.[19] On October 26, the Soviet Union withdrew its specific request for a new summit on the control of the Turkish Straits (but not its opinions) and sometime shortly thereafter pulled out most of the intimidatory military forces from the region. Turkey abandoned its policy of neutrality and accepted USD $100 million in economic and defense aid from the US in 1947 under the Truman Doctrine's plan of ceasing the spread of Soviet influence into Turkey and Greece. The two aforementioned nations joined NATO in 1952.[20]

The Turkish government appointed a new ambassador to Moscow, Faik Akdur, in November 1946. Turkish President İnönü instructed Akdur to focus solely on further development of relations with Soviet Russia. Akdur was also specifically forbidden in engaging in talks regarding the straits if they did occur.[21]

The United States proposed that an international conference be held to decide the fate of the Dardanelles and Bosphorus once and for all. This warranted a response from then-Soviet Ambassador to Turkey, S. Vinogradov, in the form of a memorandum sent to the Soviet capital on December 10, 1946, claiming that a conference held in such a climate as described by the United States was unacceptable in that the Soviet Union, in Vinogradov's opinion, was certain to be outvoted, he predicted that instead of a regime change, which was the steadfast and undying goal of the Soviet Foreign Ministry, the current infrastructure with which the straits were regulated would survive, albeit with some changes.[22]

The Soviet ambassador to Turkey during the first year-and-a-half of the crisis, Sergei Vinogradov, was replaced by the Soviet Politburo in 1948. With his successor, Aleksandr Lavrishev, came a set of instructions from the Soviet Foreign Ministry which would prove to be the last momentous Soviet document on the straits.

If the Turks want to know our stand on the straits, an answer would be as follows: the Soviet position has been thoroughly stated in the notes dated August 7 and September 24, 1946.

After the death of Joseph Stalin, motivation behind a regime change declined within the Soviet government, and on May 30, 1953, Soviet Foreign Minister Molotov disowned the Russian claims over the Bosphorus and Dardanelles, as well as the other territorial disputes along the Turkish-Armenia-Georgian border.[24]

Upon realizing the international climate would make diplomatic control over the straits as well as Turkey in general difficult, the Soviet Union made moves towards thawing relations with the country in a last-ditch effort to have a piece of the Middle East under its wing. When Turkey joined Western aligned NATO in 1952, these hopes were dashed.[25] The Montreux Treaty of 1936, with revisions, is still in place in the present day between the successor states of the USSR and Turkey.[26]