The Turkish alphabet (Turkish: Türk Alfabesi) is an alphabet derived from the Latin alphabet used for writing the Turkish language, consisting of 29 letters, seven of which (Ç, Ğ, I, İ, Ö, Ş, and Ü) have been modified from their Latin originals for the phonetic requirements of the language. This alphabet represents modern Turkish pronunciation with a high degree of accuracy and specificity. It is the current official alphabet and the latest in a series of distinct alphabets used in different eras.

The letters of the Turkish alphabet are:

The letters Q, W, and X of the ISO basic Latin alphabet do not occur in the Turkish alphabet (replacements for these letters are K, V and KS), while dotted and dotless I are distinct letters in Turkish so that "i" does not become "I" when capitalized.

Turkish also uses a, i and u with the circumflex:

Turkish orthography is highly regular and a word's pronunciation is always completely identified by its spelling. The following table presents the Turkish letters, the sounds they correspond to in International Phonetic Alphabet and how these can be approximated more or less by an English speaker.

The earliest known Turkish alphabet is the Orkhon script. In general, Turkic languages have been written in a number of different alphabets including Cyrillic, Arabic, Greek, Latin, and some other Asiatic writing systems.

Turkish was written using a Turkish form of the Arabic script for over a thousand years. It was well suited to write Ottoman Turkish which incorporated a great deal of Arabic and Persian vocabulary. However, it was poorly suited to the Turkish part of the vocabulary. Whereas Arabic is rich in consonants but poor in vowels, Turkish is exactly the opposite. The script was thus inadequate at representing Turkish phonemes. Some could be expressed using four different Arabic signs; others could not be expressed at all. The introduction of the telegraph and printing press in the 19th century exposed further weaknesses in the Arabic script.[1]

Some Turkish reformists promoted the adoption of the Latin script well before Atatürk's reforms. In 1862, during an earlier period of reform, the statesman Münuf Pasha advocated a reform of the alphabet. At the start of the 20th century similar proposals were made by several writers associated with the Young Turks movement, including Hüseyin Cahit, Abdullah Cevdet, and Celâl Nuri.[1] The issue was raised again in 1923 during the first Economic Congress of the newly founded Turkish Republic, sparking a public debate that was to continue for several years. A move away from the Arabic script was strongly opposed by conservative and religious elements. It was argued that Romanization of the script would detach Turkey from the wider Islamic world, substituting a "foreign" (i.e. European) concept of national identity for the traditional sacred community. Others opposed Romanization on practical grounds; at that time there was no suitable adaptation of the Latin script that could be used for Turkish phonemes. Some suggested that a better alternative might be to modify the Arabic script to introduce extra characters to better represent Turkish vowels.[2] In 1926, however, the Turkic republics of the Soviet Union adopted the Latin script, giving a major boost to reformers in Turkey.[1]

Turkish-speaking Armenians used the Mesrobian script to write Holy Bibles and other books in Turkish for centuries. Many Armenian linguists, including Agop Dilâçar comprised the linguistic team which invented the modern Turkish alphabet, using and modifying Latin script. The Armenian (Mesrobian) alphabet would have been fine to use, given the large number of Armenians in Constantinople who survived the Armenian Genocide, but due to politics and the cycle of impunity and massacre targeting the Armenians, the Latin script was ultimately chosen.

Introduction of the modern Turkish alphabet

File:TurkishLanguageConference29August1929.jpg
Participants of the conference on the Turkish alphabet, including Atatürk. August 29, 1929 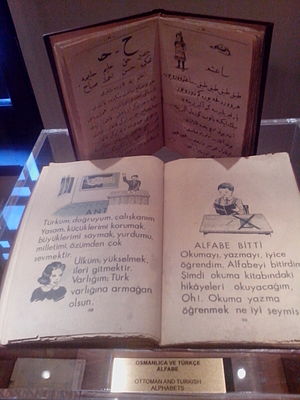 The current 29-letter Turkish alphabet was established as a personal initiative of the founder of the Turkish Republic, Mustafa Kemal Atatürk. It was a key step in the cultural part of Atatürk's Reforms,[3] introduced following his consolidation of power. Having established a one-party state ruled by his Republican People's Party, Atatürk was able to sweep aside the previous opposition to implementing radical reform of the alphabet. He announced his plans in July 1928[4] and established a Language Commission (Dil Encümeni) consisting of the following members:

The commission was responsible for adapting the Latin script to meet the phonetic requirements of the Turkish language. The resulting Latin alphabet was designed to reflect the actual sounds of spoken Turkish, rather than simply transcribing the old Ottoman script into a new form.[5] 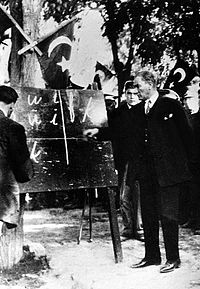 Atatürk introducing the new Turkish alphabet to the people of Kayseri. September 20, 1928

Atatürk himself was personally involved with the commission and proclaimed an "alphabet mobilisation" to publicise the changes. He toured the country explaining the new system of writing and encouraging the rapid adoption of the new alphabet.[5] The Language Commission proposed a five-year transition period; Atatürk saw this as far too long and reduced it to three months.[6] The change was formalized by the Turkish Republic's law number 1353, the Law on the Adoption and Implementation of the Turkish Alphabet,[7] passed on 1 November 1928. The law went into effect from 1 January 1929, making the use of the new alphabet compulsory in all public communications.[5]

In the Sanjak of Alexandretta (today's province of Hatay), which was at that time under French sovereignty and would later join Turkey, the local Turkish-language newspapers adopted the Latin alphabet only in 1934.[8]

The reforms were also backed up by the Law on Copyrights, issued in 1934, encouraging and strengthening the private publishing sector.[9] In 1939, the First Turkish Publications Congress was organized in Ankara for discussing issues such as copyright, printing, progress on improving the literacy rate and scientific publications, with the attendance of 186 deputies.

As cited by the reformers, the old Arabic script was much more difficult to learn than the new Latin alphabet.[10] The literacy rate did indeed increase greatly after the alphabet reform, from around 10% to over 90%[clarification needed], but many other factors also contributed to this increase, such as the foundation of the Turkish Language Association in 1932, campaigns by the Ministry of Education, the opening of Public Education Centers throughout the country, and Atatürk's personal participation in literacy campaigns.[11]

Atatürk also commented on one occasion that the symbolic meaning of the reform was for the Turkish nation to "show with its script and mentality that it is on the side of world civilization."[12] The second president of Turkey, İsmet İnönü further elaborated the reason behind adopting a Latin alphabet:

"The alphabet reform cannot be attributed to ease of reading and writing. That was the motive of Enver Pasha. For us, the big impact and the benefit of alphabet reform was that it eased the way to cultural reform. We inevitably lost our connection with Arabic culture."[13]

The Turkish writer Şerif Mardin has noted that "Atatürk imposed the mandatory Latin alphabet in order to promote the national awareness of the Turks against a wider Muslim identity. It is also imperative to add that he hoped to relate Turkish nationalism to the modern civilization of Western Europe, which embraced the Latin alphabet."[14] The explicitly nationalistic and ideological character of the alphabet reform showed in the booklets issued by the government to teach the population the new script. They included sample phrases aimed at discrediting the Ottoman government and instilling updated Turkish values, such as: "Atatürk allied himself with the nation and drove the sultans out of the homeland"; "Taxes are spent for the common properties of the nation. Tax is a debt we need to pay"; "It is the duty of every Turk to defend the homeland against the enemies." The alphabet reform was promoted as redeeming the Turkish people from the neglect of the Ottoman rulers: "Sultans did not think of the public, Ghazi commander [Atatürk] saved the nation from enemies and slavery. And now, he declared a campaign against ignorance [illiteracy]. He armed the nation with the new Turkish alphabet."[15]

The historian Bernard Lewis has described the introduction of the new alphabet as "not so much practical as pedagogical, as social and cultural – and Mustafa Kemal, in forcing his people to accept it, was slamming a door on the past as well as opening a door to the future". It was accompanied by a systematic effort to rid the Turkish language of Arabic and Persian loanwords, often replacing them with revived early Turkic words. However, the same reform also rid the language of many Western loanwords, especially French, in favor of Turkic words, albeit to a lesser degree. Atatürk told his friend Falih Rıfkı Atay, who was on the government's Language Commission, that by carrying out the reform, "we were going to cleanse the Turkish mind from its Arabic roots."[16]

Yaşar Nabi, a leading journalist, argued in the 1960s that the alphabet reform had been vital in creating a new Western-oriented identity for Turkey. He noted that younger Turks, who had only been taught the Latin script, were at ease in understanding Western culture but were quite unable to engage with Middle Eastern culture.[17] The new script was adopted very rapidly and soon gained widespread acceptance. Even so, older people continued to use the Turkish Arabic script in private correspondence, notes and diaries until well into the 1960s.[5]

Optional circumflex accents can be used with "â", "î" and "û" to disambiguate words with different meanings but otherwise the same spelling, or to indicate palatalization of a preceding consonant (for example, while "kar" /kar/ means "snow", "kâr" /kʲar/ means "profit"), or long vowels in loanwords, particularly from Arabic. These are seen as variants of "a", "i", and "u" and are becoming quite rare in modern usage.

The letter most commonly used in Turkish is A. The least used letter is J. 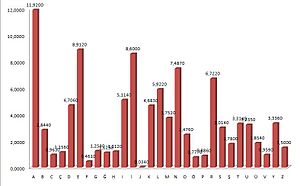 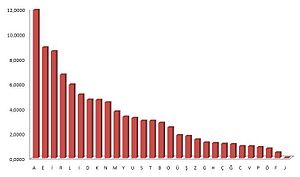