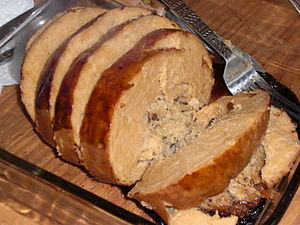 Turtle Island Foods is the company which produces Tofurky, a popular vegetarian and vegan alternative to turkey, as well other meatless products. All are vegan and approved by the UK Vegan Society, and most are kosher-certified by the Kosher Services of America.

Located in Hood River, Oregon, Turtle Island Foods began in 1980 with intentions "to create delicious, nutritious, convenient and affordable vegetarian food."[1] It was founded by Seth Tibbott,[2][3] who began by producing tempeh for friends and family[2] and with their help eventually expanded his company to what is now the second largest tempeh producer in the United States. Turtle Island Foods has no parent company.[2][4] The famous Tofurky was only developed in 1995. In 2008, Turtle Island became a sponsor of The Humane Society, the first food processor to do so in the society's history.[5] In 2011, the company announced plans to build a new plant in Hood River at a cost of $10 million with a goal to achieve a LEED platinum certification on the building.[6][7] The new 33,000-square-foot (3,100 m2) plant opened in October 2012.[3]

The company name is derived from a common legend found amongst the native people of North America.[8] Once, when all of earth was underwater, a turtle offered its shell as a home for land animals, and that shell became North America. As a result several Native American and First Nations refer to the continent as "Turtle Island".

Since 1995, when Turtle Island Foods took an official stand against GMOs, they have made "every effort possible" to avoid them.[9]

Much of what the company produces is organic, and Turtle Island Foods is actually an "Organic Processor", certified as Oregon Tilth Certified Organic.[10]

In 2005, Turtle Island Foods began to purchase all of its electricity from the Blue Sky renewable energy project of the northwestern United States.[12] All paperboard packaging is recycled.[12] In addition, a certain percentage of each year's Tofurky sales is donated to an environmental charity.[12]

Turtle Island Foods currently produces the following, many in a number of varieties: