From Infogalactic: the planetary knowledge core
Jump to: navigation, search
This article is about the island. For other uses, see Tuzla (disambiguation).
See also: Tuzla Spit

Tuzla Island (Ukrainian: Тузла; Russian: Тузла; Crimean Tatar: Tuzla) (from Turkish "tuzluk" - saturated solution of salt in water for salting fish) - is a sandy islet in the form of a spit located in the middle of the Strait of Kerch between the Kerch Peninsula in the west and the Taman Peninsula in the east. Administratively, it is part of Kerch city in eastern Crimea. 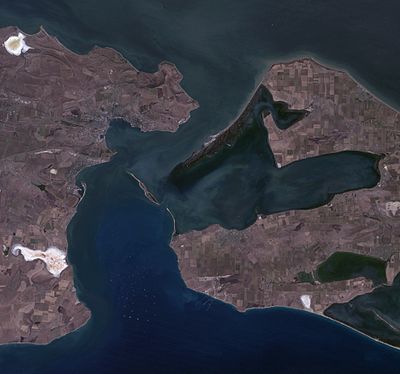 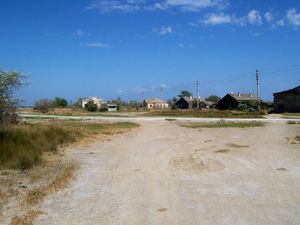 Fishing settlement at Tuzla in 2007 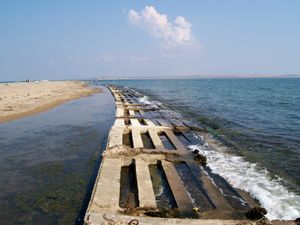 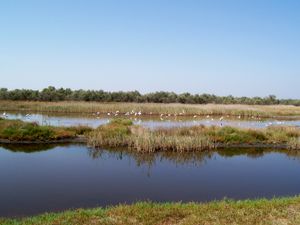 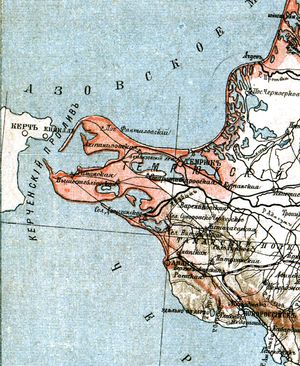 Tuzla Spit on a pre-1925 map of the Kuban region

There was a territorial dispute over the ownership of the island between Ukraine and Russia in October 2003. The Russian authorities claimed the 1954 transfer of Crimea to Ukraine had only included the continental parts of Crimea, even though the Tuzla Island had been administratively part of Crimea since 1941.[1]

The Russian side started to build a dam from the Taman peninsula towards the island to revive the eroded peninsula without any preliminary consultations with the Ukrainian government authorities. After the construction of the 3.8 km long dam was suspended at the exact point of the Russian-Ukrainian border, the distance between the dam and the island is now 1,200 m (3,900 ft). The construction of the dam led to the increase of the intensity of stream in the strait and deterioration of the island. To prevent the deterioration the government of Ukraine funded ground works to deepen the bed of the strait. The reason for those ground works was to stop Russian ships from having to pay a toll to Ukraine for crossing the strait of Kerch, which is considered as territorial waters of Ukraine. Ukraine refuses to recognize the strait as inner waters of both countries.

On October 21, 2003 the Border Service of Ukraine arrested the Russian tugboat "Truzhenik" that crossed the State Border of Ukraine and conducted photo and video surveillance of the island. After the incident, a respective protocol was created and the ship was handed over to the Russian border authorities. On October 23, 2003 the Supreme Council of Ukraine issued a resolution "to eliminate a threat to the territorial integrity of Ukraine that appeared as a result of dam construction by the Russian Federation in the strait of Kerch". A provisional special parliamentary commission was created to investigate the case more thoroughly.

On October 30–31, 2003 talks started between Ukraine and Russia that led to suspension of the construction of the dam. Due to the conflict, on December 2, 2003 a border patrol station of Ukraine was installed on the island. On December 5, 2003 the Cabinet of Ukraine issued Order #735p in regards to urgent measures to save the island. On July 4, 2004 the Cabinet of Ukraine issued Order #429p, which foresaw the construction of shore reinforcement structures and population transfer from the flooding territories.

It was formed when the spit that continued the Taman peninsula suffered from a massive erosion during a major storm in 1925. Just before the Soviet Union entered World War II on January 7, 1941, it was (based on all available Soviet maps up until 1991) part of the Crimean Oblast which in its turn on February 19, 1954, became a part of the Ukrainian SSR.

Officially, the island does not have a permanent settlement. However, there was a border station of the Border Service of Ukraine, a small fishing settlement, some private garden lots, and two vacation resorts, "Middle spit" and "Two Seas". The island's electricity is supplied by two diesel power stations. There also is a pier and a helicopter pad. A second pier, located near the fishing settlement, is in critical condition and is not in use. Two concrete surface roads run along the island. From May through October, a store is operational at the "Two Seas" resort.

Following the 2003 conflict, the Supreme Council of Crimea ordered the establishment of a new settlement on the island. However, on September 6, 2006, the Kerch city administration refused to create such a settlement, as it conflicts with the administrative-territorial composition of the city.

Distance to the unfinished dam that stretches from the Taman peninsula is about 100 m (330 ft), with water depth along the former shallow being no deeper that .6 m (2 ft 0 in).