The area of the governorate is currently split between Tver and Moscow Oblasts. Minor parts of Tver Governorate also currently belong to Yaroslavl and Novgorod Oblasts.

In 1796, the viceroyalty was subdivided into thirteen uyezds, however, Tver Governorate originally only had nine uyezds[2][3] 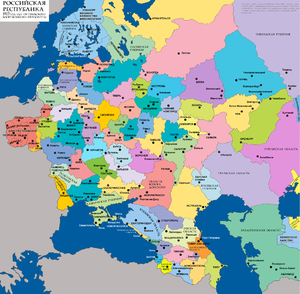 The European part of the Russian Empire in 1917. Tver Governorate is shown in magenta in the center of the map.

On 12 August 1929, Tver Governorate was abolished and split between Moscow and Western Oblasts.[4]

In 1809, Duke George of Oldenburg was appointed governor general and supervised Novgorod, Tver, and Yaroslavl Governorates. In 1812, he died, and the position of the governor general was abolished.[3]