Tver Oblast (Russian: Тверска́я о́бласть, Tverskaya oblast) is a federal subject of Russia (an oblast). Its administrative center is the city of Tver. From 1935 to 1990, it was known as Kalinin Oblast (Кали́нинская о́бласть), named after Mikhail Kalinin. Population: 1,353,392 (2010 Census).[9]

Tver Oblast is a region of lakes, such as Seliger and Brosno. Much of the remaining area is occupied by the Valdai Hills, where the Volga, the Western Dvina, and the Dnieper have their source.

Tver Oblast is one of the tourist regions of Russia with a modern tourist infrastructure. There are also many historic towns: Torzhok, Toropets, Zubtsov, Kashin, Vyshny Volochyok, and Kalyazin. The oldest of these is Rzhev, primarily known for the Battles of Rzhev in World War II. Staritsa was the seat of the last appanage principality in Russia. Ostashkov is a major tourist center.

Tver Oblast is located in the west of the middle part of the East European Plain. It stretches for 260 km from north to south and 450 km from west to east. The area borders Yaroslavl, Vologda and Novgorod oblasts in the north, Moscow and Smolensk oblasts in the south, and Pskov Oblast in the west.

Tver Oblast as a whole is characterized by flat terrain with alternating lowlands and highlands. In the western part of the province, occupying about one-third of its area is Valdai Hills, with elevations of 200–300 m above sea level. It is surrounded by depressions, lowlands have a height of 100–150 m highest point of the area has a height of 347 m, is located on a hill Tsninsky (The top of the Valdai). The low point (61 m) - the extreme north-west area of the river's edge Kunya (Russian: Кунья) on the border with the Novgorod Oblast.

Minerals discovered and developed in the Tver Oblast are mainly deposits of ancient seas, lakes and swamps, and partly a consequence of glaciers (clastic rocks).

Minerals of industrial importance are the seams of brown coal Moscow coal basin. The largest deposit is Bolshoy Nelidovskiy, which gave between 1948 and 1996 about 21 million tons.

Widespread powerful peat deposits totaling 15.4 billion m³. The estimated reserves of peat are 2,051 million tonnes, representing approximately 7% of the stock of European Russia. On an industrial scale mastered 43 peat deposits with a total area of about 300 hectares, the main exploited stocks are concentrated in five fields located in the central and southern parts of the oblast. From 1971 to 1999, has developed more than 44 million tons of peat.

The region is a watershed of the Caspian Sea and Baltic Sea . [1 ] In the south, Belsky district has several tributaries of the upper reaches of the river Vop, the right tributary of the Dnieper River (basin of the Black Sea). Go to the Caspian Sea basin owns 70% of the region, the Baltic Sea - 29.7%.

The climate is humid continental, transitional from continental Russia to the more humid north-western regions. The area lies in a zone of comfort for living and recreation climatic conditions. Average January temperatures range from −8 °C (18 °F) in west to −13 °C (9 °F) in northeast, and July from +17 °C (63 °F) to +19 °C (66 °F) °C. The average annual rainfall ranges from 560 to 720 mm, the greatest amount of precipitation falls on the western slopes of the Valdai Hills . The snow cover starts at the mid-November, the period with snow cover lasts 130–150 days, snow depth is about 40–60 cm, with a maximum of 80 cm.

There was already a settlement on the point of land at the confluence of the Tmaka River and Volga rivers in the 9th and 10th centuries. A fortress was built on the site much later, during the fighting between the Rostov-Suzdal princes and Novgorod Republic. 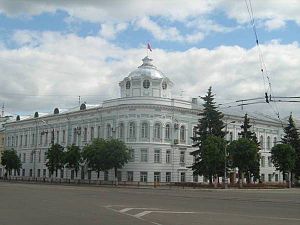 During the Soviet period, the high authority in the oblast was shared between three persons: The first secretary of the Tver CPSU Committee (who in reality had the biggest authority), the chairman of the oblast Soviet (legislative power), and the Chairman of the oblast Executive Committee (executive power). Since 1991, CPSU lost all the power, and the head of the Oblast administration, and eventually the governor was appointed/elected alongside elected regional parliament.

The Charter of Tver Oblast is the fundamental law of the region. The Legislative Assembly of Tver Oblast is the province's standing legislative (representative) body. The Legislative Assembly exercises its authority by passing laws, resolutions, and other legal acts and by supervising the implementation and observance of the laws and other legal acts passed by it. The highest executive body is the Oblast Administration, which includes territorial executive bodies such as district administrations, committees, and commissions that facilitate development and run the day to day matters of the province. The Oblast administration supports the activities of the Governor who is the highest official and acts as guarantor of the observance of the oblast Charter in accordance with the Constitution of Russia.

Tver Oblast has a very strong economy due to its machinery industry in the automobile and aeronautics sectors.

The Oblast has a well-developed infrastructure consisting of railway, river, motor vehicle, air, and pipeline transportation systems. Tver Oblast has one of the highest proportions of paved roads in the country. The region's location between Russia's two major cities, Moscow and St. Petersburg, has an obvious influence on traffic flows from Northern Europe and the Baltic countries to central Russia.

Passes through the region connecting the main "two capitals" Railway - October single-track railway with branches in Rzhev and Vyazma, Kuvshinovo and Selizharovo through Torzhok . Equally important are single-track diesel Moscow - Kashin - St. Petersburg and Moscow - Riga, and Yaroslavl - Bologoe - Great Luke and Bologoe - The bottom of the (station ), but very popular .

The development of navigation on the Volga river port "Tver" with a cargo jetty for boats "river -sea" with a draft of up to four meters.

The region is crossed four beams railways going from Moscow to the north, northwest and west:

According to a 2012 official survey[20] 30% of the population of Tver Oblast adheres to the Russian Orthodox Church, 9% are unaffiliated generic Christians, and 1% are Muslims. In addition, 34% of the population declares to be "spiritual but not religious", 20% is atheist, and 6% follows other religions or did not give an answer to the question.[20]