The Type 214 is a diesel-electric submarine developed by Howaldtswerke-Deutsche Werft GmbH (HDW). It features diesel propulsion with an air-independent propulsion (AIP) system using Siemens polymer electrolyte membrane (PEM) hydrogen fuel cells. The Type 214 submarine is derived from the Type 212,[2] but as an export variant it lacks some of the classified technologies of its smaller predecessor, the most important of which is probably the non-magnetic steel hull, which makes the Type 212 submarine impossible to detect using a magnetic anomaly detector.

A contract to build three boats for the Hellenic Navy was signed 15 February 2000 and a fourth one was ordered in June 2002. The first boat was built at HDW in Kiel, Germany and the rest at the Hellenic Shipyards Co. in Skaramangas, Greece. The Hellenic Navy named them the Papanikolis-class.

The Republic of Korea Navy has ordered nine Type 214 submarines, designated as Son Won-Il-class, to be built in Korea by Hyundai Heavy Industries and Daewoo Shipbuilding & Marine Engineering; three first batch models had entered service since 2007, and six second batch models will enter service from 2012.

Due to improvements in the pressure hull materials, the Type 214 can dive nearly 400 meters.[3] The Type 214 can carry food, fresh water and fuel for 84 days of operation.

The Greece Papanikolis U214 class is equipped with a hoistable radar mast which does not penetrate the pressure hull of the submarine. In the top of the radar mast the radar transmitter is installed. This transmitter is part of the SPHINX Radar System supplied by Thales Defence Deutschland GmbH in Kiel. The radar sensor is a FMCW transceiver which can't be detected by ESM systems in medium terms. This technology is so called LPI radar, which means "Low probability of intercept". The transmitting power is lower than the power of a mobile phone but the resolution more precise compared to high power Pulse radar. Thales SPHINX radar is a tactical radar, designed for submarines. 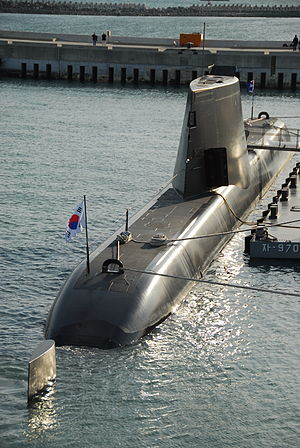 The South Korean Son Won-Il U214 Class Submarine (Hangul: 손원일급 잠수함, Hanja: 孫元一級潛水艦) is equipped with a SPHINX-D Radar System supplied by Thales Defence Deutschland GmbH. It uses an additional pulse transmitter in the top of the mast. The combination of high power pulse radar and a very low power LPI transmitter is very effective for submarines. During surface operations, the boat sails with an open pulse fingerprint for ESM systems, but within a secret mission the operator switches to LPI mode. The boat remains invisible to others. Total of 9 are planned and 4 are in active duty.

South Korea ordered its first three KSS-II/ Type 214 boats in 2000, which were assembled by Hyundai Heavy Industries. The Batch 2 order will add six more submarines to the Navy, to be built by Daewoo Shipbuilding & Marine Engineering. 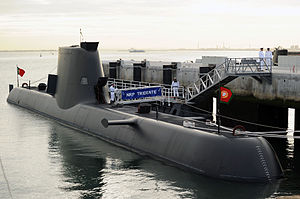 In 2005 Portugal awarded a contract to Howaldtswerke-Deutsche Werft for two type 214 submarines, which were delivered in 2010.

The Pakistan Navy negotiated for the purchase of three Type 214 submarines to be built in Pakistan in 2008. During the IDEAS 2008 exhibition, the HDW chief Walter Freitag told “The commercial contract has been finalised up to 95 per cent,” he said. The first submarine would be delivered to the Pakistan Navy in 64 months after signing of the contract while the rest would be completed successively in 12 months.[4][5] After wavering for over two years Pakistan dropped the deal in favor of a new negotiation with China Shipbuilding & Offshore International Co. Ltd. for a set of submarines that have yet to be designed.[6]

The Turkish Navy had commenced negotiations with HDW for six licence-built Type 214 class air-independent propulsion (AIP) submarines. According to the Undersecretariat for Defence Industries of the Turkish Government these submarines will be produced with maximum local content at Gölcük Naval Shipyard in Kocaeli, Turkey.

On 2 July 2009, HDW and the Turkish Ministry of Defence entered into an agreement for the licensed production of six platforms. The agreement was the largest defence acquisition project in Turkey at the time after the firm order for 116 F-35 fighters at a cost of in excess of $10 billion. Ankara hoped that its advanced, locally produced and highly modified Type 214 submarines will enter into service by 2015.[7][8][9] Defence Minister Vecdi Gonul stated that "Turkish industrial participation in the project would be worth around 80 percent of the total value of the deal".[10]

As the Turkish Type 214 will have a significant amount of Turkish indigenous systems on board, this variant of the Type 214 will be known as the Type 214TN (Turkish Navy). HDW will preassemble structural and mechanical parts of the submarine in Germany, or classified elements such as the fuel cells and propulsion system and will then ship them to Turkey. All electronic and weapon systems (including the C4I system) will be of Turkish production.

On 1 July 2011, the 2 billion euros order for six U 214 submarine material packages placed with ThyssenKrupp Marine Systems by Turkey entered into force with receipt of the advance payment. This enabled ThyssenKrupp to begin executing the order. The order was designated to contribute to securing employment at HDW in Kiel, as well as at many subcontractors in Germany and Turkey, for the next ten years. Yet, recently Turkey has received around 2 Million euros compensation from ThyssenKrupp due to delayed manufacturing of the Type214TN. Possible reason for this delay is Turkeys demand for in-house developed software within the submarines. [11]

The Hellenic Navy is procuring four Type 214 submarines to be known as the "Papanikolis-class". The first, Papanikolis, was built in Germany; the following three were scheduled for construction at HDW's Hellenic Shipyards in Greece.

The Hellenic Navy officers in charge of the testing program at the Kiel shipyards (Germany) made their case clear in a 2007 investigative journalism program called "Neoi Fakeloi" on Skai TV (Greece). Retired Rear Admiral M. Simionakis, who had been in charge of the Papanikolis program for the navy, told the interviewer that the manufacturer had made 2 attempts to fix a severe balance problem in the submarine, including shifting 21 tons of material from the top to the bottom, yet the vessel continued to heel as much as 46 degrees in sea trials. Photographic evidence of the severe heeling was presented. In the same TV program, the officer replacing Simionakis in Kiel, Capt. K. Tziotis, listed 7 ongoing, serious problems with the vessel, including balance problems when traveling on the surface, problems with the AIP system, problems with the weapon system, problems with the periscope, and problems with flooding.

For its part, TKMS, the German shipbuilder of Type 214, has asserted that it solved all the boat's technical problems in 2006 (before the interviews of the Greek officers mentioned above) and claims the Greek Navy's continuing complaints about the Papanikolis' technical condition are just a ploy to justify a price reduction. Therefore, TKMS has refused to deliver the boat to the Greek Navy until all debts are paid and the Papanikolis had been lying in Kiel harbor ever since 2006.[21]

Despite this position by TKMS, the Hellenic Navy officers in charge of the submarine delivery have repeatedly stated there are problems with the Papanikolis. In October 2008, the Papanikolis conducted a new round of trials, which showed that the excessive rolling problem has finally been fixed. The rest of the problems are considered solved. According to the Greek defence press, acceptance of the vessel was imminent.[22]

The second boat, Pipinos, was officially launched on 6 October 2014 and is at present going through Greek harbour acceptance trials in Elefsina.

On September 21, 2009 TKMS announced that the contract with the Greek Navy for all four submarines had been cancelled due to country's arrears of more than 520 million Euros. TKMS is now seeking arbitration to resolve the matter.[23][24]

On October 27, 2009 the Greek Ministry of Defence officially confirmed that they intend accepting the three boats built in Greece. [25] 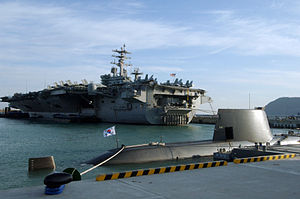 In March 2008, it was reported in the media that the first Type 214 submarine of the Republic of Korea Navy suffered from defects related to excessive noise from the screw, according to anonymous sources.[26] Later ROKN denied the report.[27] There were no further reports of such noise problems in succeeding South Korean Type 214 submarines.