The Project 941 or Akula, Russian "Акула" ("Shark") class submarine (NATO reporting name: Typhoon) is a type of nuclear-powered ballistic missile submarine deployed by the Soviet Navy in the 1980s. With a submerged displacement of 48,000 tonnes,[1] the Typhoons are the largest class of submarine ever built,[7] large enough to accommodate decent living facilities for the crew when submerged for months on end.[8] The source of the NATO reporting name remains unclear, although it is often claimed to be related to the use of the word "typhoon" ("тайфун") by Leonid Brezhnev in a 1974 speech while describing a new type of nuclear ballistic missile submarine, as a reaction to the US Navy Ohio-class submarines.[9]

The Russian Navy canceled its Typhoon modernization program in March 2012, stating that modernizing one Typhoon would be as expensive as building two new Borei-class submarines.[10] With the announcement that Russia has eliminated the last SS-N-20 Sturgeon SLBMs in September 2012, the remaining Typhoons have reached the end of service.[11]

Besides their missile armament, the Typhoon class features six torpedo tubes; all of which are designed to handle RPK-2 (SS-N-15) missiles or Type 53 torpedoes. A Typhoon-class submarine can stay submerged for periods up to 120 days[1] in normal conditions, and potentially more if deemed necessary (e.g., in the case of a nuclear war). Their primary weapons system is composed of 20 R-39 (NATO: SS-N-20) ballistic missiles (SLBM) with a maximum of 10 MIRV nuclear warheads each. Technically, Typhoons were able to deploy their long-range nuclear missiles while moored at their docks.[12]

Typhoon-class submarines feature multiple pressure hulls, similar to the WW2 Japanese I-400 STo Sen Toku Class Submarine, that simplify internal design while making the vessel much wider than a normal submarine. In the main body of the sub, two long pressure hulls lie parallel with a third, smaller pressure hull above them (which protrudes just below the sail), and two other pressure hulls for torpedoes and steering gear. This also greatly increases their survivability—even if one pressure hull is breached, the crew members in the other are safe and there is less potential for flooding.

Line drawing showing the starboard side of the Project 941 (Akula) Soviet ballistic missile submarine. The vessel's waterline is marked in white. 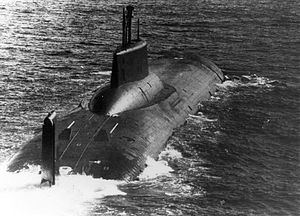 A Typhoon class submarine on the surface in 1985.

The Typhoon class was developed under Project 941 as the Russian Akula class (Акула), meaning shark. It is sometimes confused with other submarines, as Akula is the name NATO uses to designate the Russian Project 971 Shchuka-B (Щука-Б) class attack submarines. The project was developed with the objective to match the SLBM armament of Ohio-class submarines, capable of carrying 192 nuclear warheads, 100 kt each. However, at the time, state-of-the-art Soviet SLBMs were substantially larger and heavier than their American counterparts (the R-39 is more than two times heavier than the Trident I; it remains the heaviest SLBM to have been in service worldwide). The submarine had to be scaled accordingly.[citation needed]

Six Typhoon-class submarines were built. Originally, the submarines were designated by hull numbers only. Names were later assigned to the four vessels retained by the Russian Navy, which were sponsored by either a city or company. The construction order for an additional vessel (hull number TK-210) was canceled and never completed. Only the first of these submarines to be constructed, the Dmitriy Donskoy, is still in active service with the Russian Navy, serving as a test platform for the Bulava (SS-NX-32) missile. The Arkhangelsk (TK-17) and Severstal (TK-20) remain in reserve, not currently active with the Russian fleet. All the R-39 missiles have been retired. The Typhoons were slated to be replaced by the Borei class starting in 2010–11.

In late December 2008, a senior Navy official announced that the two Typhoon-class submarines, the TK-17 and TK-20, that are in reserve would not be rearmed with the new Bulava SLBM missile system. They could however be modified to carry cruise missiles or to lay mines, or could be used in special operations.[13] In late June 2009, the Navy Commander-in-Chief, Admiral Vladimir Vysotskiy told reporters that the two submarines would be reserved for possible future repairs and modernization.[14] In May 2010, the Navy Commander-in-Chief reported that Russia's Typhoon-class submarines would remain in service with the Navy until 2019.[15] In September 2011, the Russian defense ministry decided to write off all Project 941 Akula nuclear-powered ballistic missile submarines until 2014. The reasons for decommissioning the Typhoon class vessels are the restrictions imposed on Russia by the Strategic Arms Reduction Treaty and successful trials of new Borei-class submarine.[16]

Despite being a replacement for many types of submarines, the Borei class submarines are slightly smaller than the Typhoon class in terms of length (170 m as opposed to 175 m) and crew (107 people as opposed to 160). These changes were in part designed to reduce the cost to build and maintain the submarines. In addition, the United States and Canada provided 80% of funds for scrapping the older Typhoon class submarines, making it much more economical to build a new submarine.[17] However, according to other sources at the Russian defence ministry, no such decision has been made; in that case, the submarines would remain with the Russian Navy.,[18] Submarines TK-17 Arhangelsk and TK-20 Severstal will not be modernized as platforms for cruise missiles, but they will be kept in service with their previous armament, R-39 missiles.

The Submarine Cargo Vessel is a proposed idea by the Rubin Design Bureau where a Typhoon has its missile launchers removed and replaced with cargo holds. The projected cargo capacity of this configuration is 15,000 tonnes (15,000 long tons). 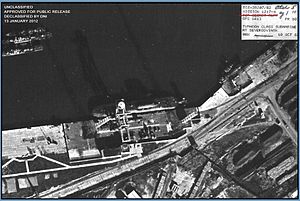 Satellite image of a Typhoon-class Submarine Severodvinsk. Declassified in 2012

In 2009 a blogger posted dozens of photos of the interior of a Typhoon submarine at Nerpichya Naval Base,[23] perhaps TK-12 or TK-13 based on the state of decay, claiming the photos were taken in 2004.[24] That pair of aging submarines were decommissioned several years prior, in 1996 and 1997. 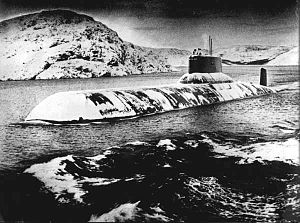 Probably the best-known fictional Typhoon-class submarine was the stealth equipped Red October, the subject of the Tom Clancy novel The Hunt for Red October and its 1990 movie adaptation, starring Sean Connery as the fictional Captain Marko Ramius.

In 2008 National Geographic released a documentary about the scrapping of one of the Typhoons in the series "Break It Down".[25] This ship is TK-13, which was scrapped over the time period 2007–2009.