A tyrant (Greek τύραννος, tyrannos), in its modern English usage, is an absolute ruler unrestrained by law or constitution, or one who has usurped legitimate sovereignty. Often described as a cruel character, a tyrant defends his position by oppressive means, tending to control almost everything in the state.[1][2] The original Greek term, however, merely meant an authoritarian sovereign without reference to character,[3] bearing no pejorative connotation during the Archaic and early Classical periods. However, it was clearly a negative word to Plato, and on account of the decisive influence of philosophy on politics, its negative connotations only increased, continuing into the Hellenistic period.

Plato and Aristotle define a tyrant as "one who rules without law, and uses extreme and cruel tactics—against his own people as well as others".[4] It is defined further in the Encyclopédie as a usurper of sovereign power who makes his subjects the victims of his passions and unjust desires, which he substitutes for laws.[5] During the seventh and sixth centuries BC, tyranny was often looked upon as an intermediate stage between narrow oligarchy and more democratic forms of polity. However, in the late fifth and fourth centuries BC, a new kind of tyrant, the military dictator, arose, specifically in Sicily.

The English noun tyrant appears in Middle English use, via Old French, from the 1290s. The word derives from Latin tyrannus, meaning "illegitimate ruler", and this in turn from the Greek τύραννος tyrannos "monarch, ruler of a polis"; tyrannos in its turn has a Pre-Greek origin, perhaps from Lydian.[6][7] The final -t arises in Old French by association with the present participles in -ant.[8] 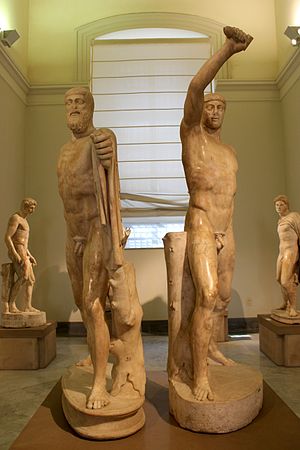 A sculptural pairing of Harmodius and Aristogeiton. They became known as the tyrannicides after they killed Hipparchus, and were the preeminent symbol of Athenian democracy

In ancient Greece, tyrants were influential opportunists that came to power by securing the support of different factions of a deme. The word tyrannos, possibly pre-Greek, Pelasgian or eastern in origin,[9] then carried no ethical censure; it simply referred to anyone, good or bad, who obtained executive power in a polis by unconventional means. Support for the tyrants came from the growing middle class and from the peasants who had no land or were in debt to the wealthy landowners. It is true that they had no legal right to rule, but the people preferred them over kings or the aristocracy.

The Greek tyrants stayed in power by using mercenary soldiers from outside of their respective city-state. To mock tyranny, Thales wrote that the strangest thing to see is "an aged tyrant" meaning that tyrants do not have the public support to survive for long.

In Corinth, growing wealth from colonial enterprises, and the wider horizons brought about by the export of wine and oil, together with the new experiences of the Eastern Mediterranean brought back by returning mercenary hoplites employed overseas created a new environment. Conditions were right for Cypselus to overthrow the aristocratic power of the dominant but unpopular clan of Bacchiadae. Clan members were killed, executed, driven out or exiled in 657 BC. Corinth prospered economically under his rule, and Cypselus managed to rule without a bodyguard. When he then bequeathed his position to his son, Periander, the tyranny proved less secure, and Periander required a retinue of mercenary soldiers personally loyal to him.

Nevertheless, under Cypselus and Periander, Corinth extended and tightened her control over her colonial enterprises, and exports of Corinthian pottery flourished. However, tyrants seldom succeeded in establishing an untroubled line of succession. Periander's successor was less fortunate and was expelled. Afterward, Corinth was ruled by a lackluster oligarchy, and was eventually eclipsed by the rising fortunes of Athens and Sparta.

In Athens, the inhabitants first gave the title of tyrant to Peisistratus (a relative of Solon, the Athenian lawgiver) who succeeded in 546 BC, after two failed attempts, to install himself as tyrant. Supported by the prosperity of the peasantry and landowning interests of the plain, which was prospering from the rise of olive oil exports, as well as his clients from Marathon, he managed to achieve authoritarian power. Through an ambitious program of public works, which included fostering the state cult of Athena; encouraging the creation of festivals; supporting the Panathenaeic Games in which prizes were jars of olive oil; and supporting the Dionysia (ultimately leading to the development of Athenian drama), Peisistratus managed to maintain his personal popularity.

He was followed by his sons, and with the subsequent growth of Athenian democracy, the title "tyrant" took on its familiar negative connotations. The murder of Peisistratus' son, the tyrant Hipparchus by Aristogeiton and Harmodios in Athens in 514 BC marked the beginning of the so-called "cult of the tyrannicides" (i.e., of killers of tyrants). Contempt for tyranny characterised this cult movement. Despite financial help from Persia, in 510 the Peisistratids were expelled by a combination of intrigue, exile and Spartan arms. The anti-tyrannical attitude became especially prevalent in Athens after 508 BC, when Cleisthenes reformed the political system so that it resembled demokratia (ancient participant democracy as opposed to the modern representative democracy).

The Thirty Tyrants whom the Spartans imposed on a defeated Attica in 404 BC would not be classified as tyrants in the usual sense and were in effect an oligarchy.

An aesymnetes (pl. aesymnetai) had similar scope of power to the tyrant, such as Pittacus of Mytilene (c. 640-568 BC), and was elected for life or for a specified period by a city-state in a time of crisis—the only difference being that the aesymnetes was a constitutional office and was comparable to the Roman dictator. Magistrates in some city-states were also called aesymnetai.

The heyday of the Archaic period tyrants came in the early 6th century BC, when Cleisthenes ruled Sicyon in the Peloponnesus and Polycrates ruled Samos. During this time, revolts overthrew many governments in the Aegean world. Chilon, the ambitious and capable ephor of Sparta, built a strong alliance amongst neighbouring states by making common cause with these groups seeking to oppose unpopular tyrannical rule. By intervening against the tyrants of Sicyon, Corinth and Athens, Sparta thus came to assume Hellenic leadership prior to the Persian invasions. Simultaneously Persia first started making inroads into Greece, and many tyrants sought Persian help against popular forces seeking to remove them.

Greek tyranny in the main grew out of the struggle of the under classes against the aristocracy, or against priest-kings where archaic traditions and mythology sanctioned hereditary and/or traditional rights to rule. Popular coups generally installed tyrants, who often became or remained popular rulers, at least in the early part of their reigns. For instance, the popular imagination remembered Peisistratus for an episode - related by (pseudonymous) Aristotle, but possibly fictional - in which he exempted a farmer from taxation because of the particular barrenness of his plot.

Peisistratus' sons Hippias and Hipparchus, on the other hand, were not such able rulers, and when the disaffected aristocrats Harmodios and Aristogeiton slew Hipparchus, Hippias' rule quickly became oppressive, resulting in the expulsion of the Peisistratids in 510 BC, who resided henceforth in Persepolis as clients of the Persian Shahanshah (King of kings).

The tyrannies of Sicily came about due to similar causes, but here the threat of Carthaginian attack prolonged tyranny, facilitating the rise of military leaders with the people united behind them. Such Sicilian tyrants as Gelo, Hiero I, Hiero II, Dionysius the Elder, Dionysius the Younger, and Agathocles maintained lavish courts and became patrons of culture.

Under the Macedonian hegemony in the 4th and 3rd century BC a new generation of tyrants rose in Greece, especially under the rule of king Antigonus II Gonatas, who installed his puppets in many cities of the Peloponnese. Examples were Cleon of Sicyon, Aristodemus of Megalopolis, Aristomachus I of Argos, Abantidas of Sicyon, Aristippus of Argos, Lydiadas of Megalopolis, Aristomachus II of Argos, and Xenon of Hermione.

Against these rulers, in 280 BC the democratic cities started to join forces in the Achaean League which was able to expand its influence even into Corinthia, Megaris, Argolis and Arcadia. From 251 BC under the leadership of Aratus of Sicyon, the Achaeans liberated many cities, in several cases by convincing the tyrants to step down, and when Aratus died in 213 BC, Hellas had been free of tyrants for more than 15 years. The last tyrant on the Greek mainland, Nabis of Sparta, was assassinated in 192 BC and after his death the Peloponnese was united as a confederation of stable democracies in the Achaean League.

Roman historians like Suetonius, Tacitus, Plutarch, and Josephus often spoke of "tyranny" in opposition to "liberty". Tyranny was associated with imperial rule and those rulers who usurped too much authority from the Roman Senate. Those who were advocates of "liberty" tended to be pro-Republic and pro-Senate. For instance, regarding Julius Caesar and his assassins, Suetonius wrote:

Therefore the plots which had previously been formed separately, often by groups of two or three, were united in a general conspiracy, since even the populace no longer were pleased with present conditions, but both secretly and openly rebelled at his tyranny and cried out for defenders of their liberty.[10]

Niccolò Machiavelli, building on this opposition, conflates all rule by a single person (whom he generally refers to as a "prince") with "tyranny," regardless of the legitimacy of that rule, in his Discourses on Livy. He also identifies liberty with republican regimes; whether he would include so-called "crowned republics" (such as modern constitutional monarchies) is somewhat unclear from the text.

Ancient Greeks, as well as the Roman Republicans, became generally quite wary of many people seeking to implement a popular coup. Shakespeare portrays the struggle of one such anti-tyrannical Roman, Marcus Junius Brutus, in his play Julius Caesar. 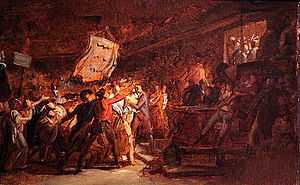 François Gérard, The French people demanding destitution of the Tyran on 10 August 1792

In the Enlightenment, thinkers applied the word tyranny to the system of governance that had developed around aristocracy and monarchy. Specifically, John Locke as part of his argument against the "Divine Right of Kings" in his book Two Treatises of Government defines it this way: “Tyranny is the exercise of power beyond right, which nobody can have a right to; and this is making use of the power any one has in his hands, not for the good of those who are under it, but for his own private, separate advantage.”[11] Locke's concept of tyranny influenced the writers of subsequent generations who developed the concept of tyranny as counterpoint to ideas of human rights and democracy. Thomas Jefferson referred to the tyranny of King George III of Great Britain in the Declaration of Independence, and the concept was refined in turn to refer to the Kings of France, the tyrants of the Terror, and to Napoleon I in turn during the French Revolution and subsequent regimes.