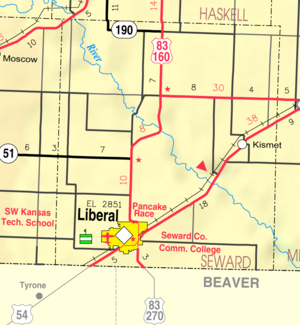 US 270 begins in Liberal, Kan., and leaves the state three miles south of there.

US 270 begins in the southeast part of Liberal, Kansas, at an intersection with US 83 (running north–south through the intersection) and US 54. US 270 follows the south leg of this intersection, following US 83 south. US 270 only spends 3 miles (4.8 km) in Kansas before crossing into Oklahoma. Seward County is the only county that US-270 serves. 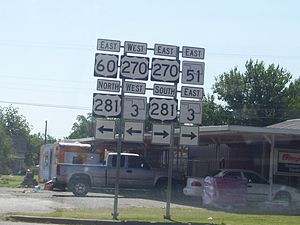 US 270 concurs with many highways in northwestern Oklahoma.

US 270 enters Oklahoma in Beaver County, the eastern third of the Oklahoma Panhandle. From here it continues east along US 64, then south towards Beaver, the county seat, along SH-23. South of Beaver, the road joins with US 412 (OK) and SH-3, the latter of which US 270 will overlap with through most of northwest Oklahoma. After leaving the Panhandle and picking up US 183 near Fort Supply, the highways turn southwest towards Woodward. US 412 splits away in Woodward. US 270, concurrent with US 183 and SH-3, proceed southeast toward Seiling. West of Seiling, US 183 splits off to the south, but in Seiling, it is replaced by US 281. The routes continue southwest to Watonga, where US 270/281 turn south along SH-8, while SH-3 continues due east to concur with SH-33. In Geary, US 270 splits off on an independent alignment, looping through Calumet before joining with Interstate 40.

US 270 remains concurrent with I-40 from Exit 115 through Exit 181, a distance of 66 miles (106 km). US 270, attached to I-40, runs through the core of the Oklahoma City Metro area, passing through the western suburbs of El Reno and Yukon into Oklahoma City proper. The partnership runs just south of Downtown and the Bricktown entertainment district on the Crosstown Expressway. Major interchanges with I-44 and I-35 (the latter involving a concurrency with the interstate and its accompanying US Highway, US 62) are found in the city. I-40/US 270 also serve two eastern suburbs of Oklahoma City, Del City and Midwest City and form the northern boundary between Midwest City's civilian areas and Tinker Air Force Base. US-270 finally exits from I-40 on the west side of Shawnee.

US 270 serves most of the towns anchoring the area east of Oklahoma City, including Shawnee, Tecumseh, Seminole, Wewoka, and Holdenville. It continues southeast to the city of McAlester, a major southeastern Oklahoma city. It also serves many of the small towns east of McAlester, such as Krebs, Alderson, Bache, Haileyville, and Hartshorne.

After passing through Hartshorne, the roads curves to the northeast before turning onto a due east course taking it through Wilburton, Red Oak, and Wister. In Wister, it turns south, running across Wister Lake's dam, and proceeding southeast to Heavener. There, it meets US 59, which it will follow for the rest of its time in Oklahoma. The town highways head south from Heavener, passing through the Wister Wildlife Management Area before entering the Ouachita National Forest. The route serves as the northern terminus of US 259 near Page. The road then squeezes into a valley between Black Fork Mountain and Rich Mountain. In this valley, it crosses the state line into Arkansas. 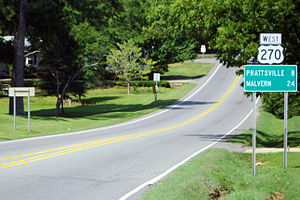 US 270 enters Arkansas with US 59, and runs east to Acorn, where it meets US 71. The route then travels 15 miles north on US 71 to Y City where it splits off and continues east. The route then meets AR 88 in Pencil Bluff and AR 27 in Mt. Ida before heading to Hot Springs. Entering the city, US 270 meets US 70 southwest of town and runs concurrent with it through downtown Hot Springs. After leaving Hot Springs, US 270 enters Malvern briefly with I-30 and runs downtown with US 67. US 270 meets AR 229 in Poyen and AR 190/AR 291 in Prattsville before crossing paths with US 167 in Sheridan. The route trails east towards Pine Bluff to AR 365S/US 65/I-530 near White Hall, where the route terminates.

In Arkansas, US-270 was formerly Highway 6.[citation needed]

U.S. Highway 270B is a 9.4-mile-long (15.1 km) business route in Garland County, Arkansas. It runs through downtown Hot Springs, Arkansas.

Other loops and spurs

Lua error in Module:Message_box at line 358: too many expensive function calls.