From Infogalactic: the planetary knowledge core
Jump to: navigation, search
This article is about the sporting event. For the video game based on this event, see UEFA Euro 2012 (video game). 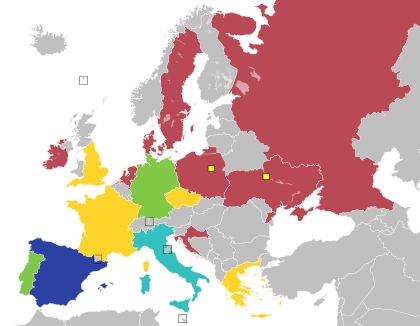 The 2012 UEFA European Championship, commonly referred to as UEFA Euro 2012 or simply Euro 2012, was the 14th European Championship for men's national football teams organised by UEFA. The final tournament, held between 8 June and 1 July 2012, was co-hosted for the first time by Poland and Ukraine, and was won by Spain, who beat Italy 4–0 in the final at the NSK Olimpiyskyi in Kyiv, Ukraine.[1]

Poland and Ukraine's bid was chosen by UEFA's Executive Committee on 18 April 2007.[2] The two host teams qualified automatically while the remaining 14 finalists were decided through a qualifying competition, featuring 51 teams, from August 2010 to November 2011. This was the last European Championship to employ the 16-team finals format in use since 1996; from Euro 2016 onward, it will be expanded to 24 finalists.

Euro 2012 was played at eight venues, four in each host country. Five new stadiums were built for the tournament, and the hosts invested heavily in improving infrastructure such as railways and roads at UEFA's request. Euro 2012 set attendance records for the 16-team format, for the highest aggregate attendance (1,440,896) and average per game (46,481).

Spain became the first team to win two consecutive European Championships, and also three straight major tournaments (Euro 2008, 2010 World Cup and Euro 2012).[3] Spain had already gained entry to the 2013 Confederations Cup by winning the 2010 World Cup, so runners-up Italy qualified instead.[4] As at Euro 2008 in Austria and Switzerland, both 2012 host nations were eliminated in the group stage.[lower-alpha 1]

The hosting of the event was initially contested by five bids representing seven countries: Croatia–Hungary, Greece, Italy, Poland–Ukraine, and Turkey.[5] In November 2005, after an initial consideration of the bid data by UEFA, both the Greek and Turkish bids were eliminated from the process, to leave three candidates.[6]

In May 2006, this was followed by a second round of the selection process, which included visits by UEFA to all candidates.[7] The final decision was due to be announced on 8 December 2006 in Nyon, but this was postponed to "give bidding associations more time for the fine-tuning of their bids".[8] On 18 April 2007, the Poland–Ukraine bid was chosen by a vote of the UEFA Executive Committee, at a meeting in Cardiff.[2]

Poland–Ukraine became the third successful joint bid for the European Championship, after those of Belgium–Netherlands (2000) and Austria–Switzerland (2008). Their bid received an absolute majority of votes, and was therefore announced the winner, without requiring a second round. Italy, which received the remaining votes,[2] had been considered favourites to win the hosting, but incidents of fan violence and a match fixing scandal were widely cited as factors behind their failure.[9][10][11]

There were some later alterations from the initial bid plan, regarding the venues, before UEFA confirmed the eight host cities in 2009.[12][13] During the preparation process in Poland and Ukraine, UEFA repeatedly expressed concern about their preparation to host the event, with different candidates reported as being alternative hosts if they did not improve;[14][15] however, in the end, UEFA affirmed their selection.[16]

The draw for the UEFA Euro 2012 qualifying competition took place in Warsaw on 7 February 2010.[17] Fifty-one teams entered to compete for the fourteen remaining places in the finals, alongside co-hosts Poland and Ukraine. The teams were divided into nine groups, with the draw using the new UEFA national team coefficient for the first time in order to determine the seedings. As defending champions, Spain was automatically top seeded.[18] The qualifying process began in August 2010 and concluded in November 2011. At the conclusion of the qualifying group stage in October 2011, the nine group winners qualified automatically, along with the highest ranked second placed team. The remaining eight-second placed teams contested two-legged play-offs, and the four winners qualified for the finals.[18]

Twelve of the sixteen finalists participated at the previous tournament in 2008. England and Denmark made their return to the Euro, having last participated in 2004, while Republic of Ireland returned after a twenty-four-year absence to make their second appearance at a European Championship. One of the co-hosts, Ukraine, made their debut as an independent nation (before 1992 Ukraine participated as part of the Soviet Union). With the exception of Serbia – according to UEFA's ranking at the end of the qualifying stage – Europe's sixteen highest-ranked teams all qualified for the tournament.

The following sixteen teams qualified for the finals:[19]

The draw for the final tournament took place on 2 December 2011 at the Ukraine Palace of Arts in Kiev, Ukraine.[20][21] The hour-long ceremony was hosted by Olha Freimut and Piotr Sobczyński, television presenters from the two host countries.

Aside from the coefficient, three teams were automatically placed in Pot 1. Ukraine and Poland were both assigned to Pot 1 as the two host nations, despite the fact that their rankings were the two lowest in the tournament; this also occurred in 2008 when the co-hosts Switzerland and Austria were also ranked below all other qualified teams. As defending champions, Spain were also automatically assigned to Pot 1, though their UEFA ranking at the time of the draw was coincidentally also the best.

In the draw procedure, one team from each pot was drawn into each of the four groups. The draw also determined which place in the group teams in pots 2–4 would take (e.g. A2, A3 or A4) to create the match schedule. With Poland automatically assigned in advance to A1, and Ukraine to D1, Pot 1 only had two teams as Spain and the Netherlands were to be drawn into position one in either group B or C.[23][25] The balls were drawn by four former players who had each been part of European Championship winning teams: Horst Hrubesch, Marco van Basten, Peter Schmeichel and Zinedine Zidane.[26] 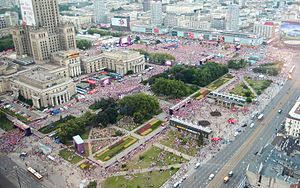 Eight cities were selected by UEFA as host venues. In a return to the format used at Euro 1992, Euro 1996 and Euro 2008, each of the four groups' matches were played in two stadiums. Host cities Warsaw, Gdańsk, Wrocław, Poznań, Kiev, and Lviv are all popular tourist destinations, unlike Donetsk and Kharkiv, the latter of which replaced Dnipropetrovsk as a host city in 2009.[27]

In order to meet UEFA's requirement for football infrastructure improvements, five new stadiums were built and opened in advance of the tournament. The remaining three stadiums (in Kiev, Poznań and Kharkiv) underwent major renovations in order to meet UEFA's infrastructure standards.[28][29] Three of the stadiums are categorised as UEFA's highest category stadiums. The transport infrastructure in Poland and Ukraine was also extensively modified on the request of UEFA to cope with the large influx of football fans.[30]

UEFA organised fan zones in the eight host cities. They were located in the centre of each city, with all 31 matches shown live on a total of 24 giant screens. The zones enabled supporters to come together in a secure and controlled environment. The Warsaw Fan Zone occupied 120,000 square meters and accommodated 100,000 visitors. In all, the fans zones had a 20% increase in capacity compared to Euro 2008.[31]

Tickets for the venues were sold directly by UEFA via its website, or distributed by the football associations of the 16 finalists. Applications had to be made during March 2011 for the 1.4 million tickets available for the 31 tournament matches.[40] Over 20,000 were forecast to cross the Poland–Ukraine border each day during the tournament.[41] Over 12 million applications were received, which represented a 17% increase on the 2008 finals, and an all-time record for the UEFA European Championship.[42] Owing to this over-subscription for the matches, lotteries were carried out to allocate tickets. Prices varied from €30 (£25) (for a seat behind the goals at a group match) to €600 (£513) (for a seat in the main stand at the final). In addition to individual match tickets, fans could buy packages to see either all matches played by one team, or all matches at one specific venue.[43]

Each team had a "team base camp" for its stay between the matches. From an initial list of thirty-eight potential locations (twenty-one in Poland, seventeen in Ukraine),[44] the national associations chose their locations in 2011. The teams trained and resided in these locations throughout the tournament, travelling to games staged away from their bases.[45] Thirteen teams stayed in Poland and three in Ukraine.[45]

According to UEFA requirements, TP ensured approximately 2х70 Gbit/sec data communication speed from Polish stadiums and 2х140 Gbit/sec between Poland and Ukraine. This was required due to the fact that the matches were broadcast in HD quality.[46] The multilateral production utilised 31 cameras to cover the action on and around the pitch at every match, with additional cameras following activities around the game, such as team arrivals at the stadiums, interviews, and media conferences.[47] The official Euro 2012 broadcasting centre was located at the Expo XXI International Centre in Warsaw.[46] The tournament was broadcast live by around 100 TV channels covering the whole world.[48] 150,000,000 people were expected to watch the matches each day.[49] 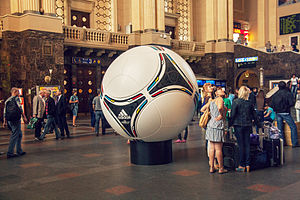 The Adidas Tango 12 was the official match ball of UEFA Euro 2012.[50] The ball is named after the original Adidas Tango family of footballs; however, the Tango 12 and its variations have a completely new design. Variations of the ball have been used in other contemporary competitions including the Africa Cup of Nations and the Summer Olympics. It is designed to be easier to dribble and control than the reportedly unpredictable Adidas Jabulani used at the 2010 FIFA World Cup.[51]

For the list of all squads that played in the tournament, see UEFA Euro 2012 squads.

UEFA announced the schedule for the 31 matches of the final tournament in October 2010,[57] with the final confirmation of kick-offs times being affirmed following the tournament draw in December 2011.[58]

The teams finishing in the top two positions in each of the four groups (highlighted in tables) progressed to the quarter-finals, while the bottom two teams were eliminated from the tournament.[59]

If two or more teams were equal on points on completion of the group matches, the following tie-breaking criteria were applied:[60][61][lower-alpha 2]