From Infogalactic: the planetary knowledge core
Jump to: navigation, search
This article is about the newspaper. For the education monthly, see USA Today (magazine). For the song by Alan Jackson, see USA Today (song).

USA Today is a national American daily middle-market newspaper published by the Gannett Company. It was founded by Al Neuharth on September 15, 1982.[2] The newspaper ties with The Wall Street Journal and The New York Times for the position of having the widest circulation of any newspaper in the United States, a distinction it had previously held since 2003. According to the Audit Bureau of Circulations, the paper had 1.8 million copies as of March 2012[1] compared with The Wall Street Journal's 2.1 million[1] though the latter figure included the WSJ's 400,000 paid-for, online subscribers. USA Today remains the widest circulated print newspaper in the United States.[citation needed]

USA Today is distributed in all 50 states, the District of Columbia, Guam, Puerto Rico, Canada, and the United Kingdom. The newspaper is headquartered in the Tysons Corner, Virginia in Fairfax County.[3] USA Today sells for US $2 at newsstands, although it is often found free at airports and hotels that distribute it to their customers; the paper is also free online.[citation needed]

File:USA Today cover page.jpg
This February 5, 2009 issue of USA Today shows the old layout and logo of the paper prior to it being redesigned in 2012.

USA Today is known for synthesizing news down to easy-to-read-and-comprehend stories. In the main edition seen in the US and some Canadian cities, each edition consists of four sections: News (the oft-labeled "front page" section), Money, Sports, and Life. On Fridays, two Life sections are included: the regular Life for entertainment (subtitled Weekend; section E), which features television, a DVD column, film reviews and trends, and a travel supplement called Destinations & Diversions (section D). The international edition of the paper features two sections: News and Money in one; with Sports and Life in the other.

The paper does not print on Saturdays and Sundays; the Friday edition serves as the weekend edition. USA Today prints each complete story on the front page of the respective section with the exception of the cover story. The cover story is a longer story that requires a jump (readers must turn to another page in the paper to complete the story, usually the next page of that section). On certain days, the news or sports section will take up two paper sections, and there will be a second cover story within the second section.

Each section is denoted by a certain color to differentiate sections beyond lettering and is seen in a box the top-left corner of the first page, with News being blue (section A), Money with green (section B), red for Sports (section C), and purple for Life (section D). Orange is used for bonus sections (section E or above), which are published occasionally such as for business travel trends and the Olympics; other bonus sections for sports (such as for the PGA Tour preview, NCAA Basketball Tournaments, Memorial Day auto races (Indianapolis 500 and Coca-Cola 600), NFL opening weekend and the Super Bowl) previously used the orange color, but now use the sports red in their bonus sections. On days featuring bonus sections or business holidays, the Money and Life sections are usually combined into one section, while combinations of the Friday Life editions into one section are common during quiet weeks. The stock tables were discontinued after the last redesign in 2012 due to the myriad electronic ways to check individual stock prices, in line with most newspapers. Gannett's television stations (spun-off in 2015 into the new broadcast organization TEGNA Media) also now mainly use the USA Today coloring scheme in the company's newest graphics package, which was introduced in late 2012.

In many ways, USA Today is set up to break the typical newspaper layout. Some examples of that divergence from tradition include using the left-hand quarter of each section as reefers (front-page paragraphs referring to stories on inside pages[10]), sometimes using sentence-length blurbs to describe stories inside. As a national newspaper, USA Today cannot focus on the weather for any one city. Therefore, the entire back page of the News section is used for weather maps and temperature lists for the entire United States and many cities throughout the world, with data provided by The Weather Channel meteorologists. In the bottom left-hand corner of the weather page is a graphic called "Weather Focus", which explains various meteorological phenomena. On some days, the Weather Focus could be a photo of a rare meteorological event. On Mondays, the Money section uses its back page to present an unusual graphic depicting the performance of various industry groups as a function of quarterly, monthly, and weekly movements against the S&P 500. Like most national papers, USA Today does not carry comic strips.

Book coverage, including reviews and a national sales chart, is seen on Thursdays in Life, with the official full A.C. Nielsen television ratings chart printed on Wednesdays or Thursdays, depending on release. The paper also publishes the Mediabase survey for several genres of music, based on radio airplay spins on Tuesdays, along with their own chart of the top ten singles in general on Wednesdays. Advertising coverage is seen in the Monday Money section, which often includes a review of a current television ad, and after Super Bowl Sunday, a review of the ads aired during the broadcast with the results of the Ad Track live survey. 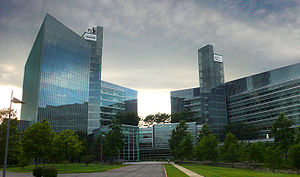 One of the staples of the News section is a state-by-state roundup of headlines. The summaries consist of paragraph-length Associated Press reports highlighting one story of note in each state, the District of Columbia, and one U.S. territory.

Some traditions have been retained, however. The lead story still appears on the upper-right hand of the front page. Commentary and political cartoons occupy the last few pages of the News section. Stock and mutual fund data are presented in the Money section. But USA Today is sufficiently different in aesthetics to be recognized on sight, even in a mix of other newspapers, such as at a newsstand. The overall design and layout of USA Today has been described as neo-Victorian.[11]

Also, in most of the sections' front pages, on the lower left hand corner, are "USA Today Snapshots", which give statistics of various lifestyle interests according to the section it is in (for example, a snapshot in "Life" could show how many people tend to watch a certain genre of television show based upon the type of mood they are in at the time). These "Snapshots" are shown through graphs which are made up of various illustrations of objects that roughly pertain to the graphs subject matter (using the example above, the graph's bars could be made up of several TV sets, or ended by one). These are usually loosely based on research by a national institute (with the source in the box below the graph in fine print to show credit).

On August 27, 2010, USA Today announced that it would be reorganizing its newsroom. 130 people were to be laid off, a new publication called USA Today Sports would be created, and the paper would be shifting its focus away from print and more on digital platforms like USA Today.com and mobile phone applications (apps).

On January 24, 2011, to reverse a revenue slide, the paper introduced a tweaked format, changing a few looks of the front pages of sections.[15]

Some of the changes include:

On September 14, 2012, USA Today underwent the first major redesign in its history with brand design firm Wolff Olins, in commemoration for the 30th anniversary of the paper's first edition.[16] The print edition of USA Today now features the additions of a page covering technology stories and an increased number of color pages, while retaining longtime elements.[17] The "globe" logo used since the paper's inception was replaced with a new logo featuring a large circle rendered in colors corresponding to each of the sections, serving as an infographic that changes with news stories, containing images representing that day's top stories.[17]

The paper's website was also revamped from the ground up using a new, in-house content management system known as Presto, and a design created by Fantasy Interactive. The site was designed to be more interactive, provide optimizations for mobile and touchscreen devices, provide "high impact" advertising units, and provide the ability for Gannett to syndicate USA Today content to the websites of its local properties, and vice versa. To accomplish this goal, Gannett migrated its newspaper and television station websites to use Presto and the USA Today site design throughout 2013 and 2014.[18] Additionally, to increase their ties to USA Today, Gannett's television stations began to phase in a new on-air appearance for news programming that uses a color-coding system identical to that of the paper.[19]

In May 2012 , Larry Kramer was appointed president and publisher of the paper. The 40-year media industry veteran and former president of CBS Digital Media, is tasked with developing a new strategy for the paper as it seeks to increase revenue from its digital operations.[20] In July 2012, Kramer hired David Callaway as the paper's editor-in-chief from MarketWatch. Kramer had founded MarketWatch at CBS in 1997 and hired Callaway as its top editor two years later. Callaway had previously worked at Bloomberg covering the banking, investment-banking and asset-management businesses throughout Europe and at the Boston Herald, where he co-wrote a daily financial column on "comings and goings in the Boston business district".[21]

David Hunke was the previous publisher.[22]

In 1987, Gannett and producer Grant Tinker began developing a newsmagazine series for first-run syndication that attempted to bring the breezy style of USA Today to television.[23] The result was the USA Today: The Television Show (later retitled USA Today on TV, then shortened to simply USA Today), which debuted on September 12, 1988.[24] Correspondents on the series included Edie Magnus, Robin Young, Boyd Matson, Kenneth Walker, Dale Harimoto, Ann Abernathy, Bill Macatee and Beth Ruyak. As with the newspaper itself, the show was divided into four "sections" corresponding to the different parts of the paper – News, Money, Sports and Life.

The series was plagued by low ratings and negative reviews from critics throughout its run; the program also suffered from airing in undesirable timeslots in certain markets, including in the country's largest media market, New York City, where WCBS-TV aired the program in a pre-dawn early morning slot. WNBC acquired the series from WCBS five months into the program's run, airing it at 9:30 AM, but it fared no better in its new time slot.[25] (Canadian television station City TV, in contrast, ran it at 5 pm.)[26] These setbacks led to the cancellation of the TV version of USA Today in November 1989 after one-and-a-half seasons; the final edition aired on January 7, 1990.[27]

File:USA Today BTTF Logo.png
The futuristic Logo used in Back to the Future Part II

USA Today has been parodied in various media over the years, such as: