From Infogalactic: the planetary knowledge core
(Redirected from USS Cavalla (SSK-244))
Jump to: navigation, search
For other ships with the same name, see USS Cavalla.

USS Cavalla (SS/SSK/AGSS-244), a Gato-class submarine, was a ship of the United States Navy named for a salt water fish, best known for sinking the Japanese aircraft carrier Shōkaku, a veteran of the Pearl Harbor attack.

Departing New London 11 April 1944, Cavalla arrived at Pearl Harbor 9 May, for voyage repairs and training. On 31 May 1944 she put to sea, bound for distant, enemy-held, waters.

On her maiden patrol Cavalla, en route to her station in the eastern Philippines, made contact with a large Japanese task force on 17 June. Cavalla tracked the force for several hours, relaying information which contributed to the United States victory in the Battle of the Philippine Sea (commonly known as the "Marianas Turkey Shoot") on 19 – 20 June 1944. On 19 June she caught the carrier Shōkaku recovering planes, and quickly fired a spread of six torpedoes, with three hits. Shōkaku sank at Lua error in Module:Coordinates at line 668: callParserFunction: function "#coordinates" was not found.. After a severe depth charging by three destroyers, Cavalla escaped to continue her patrol, with relatively minor damage by depth charges from the Japanese destroyer Urakaze. The feat earned her a Presidential Unit Citation.

Cavalla's second patrol took her to the Philippine Sea as a member of a wolfpack operating in support of the invasion of Peleliu 15 September 1944.

Cavalla cruised the South China and Java Seas on her fourth and fifth war patrols. Targets were few and far between, but she came to the aid of an ally on 21 May 1945. A month out on her fifth patrol, the submarine sighted HMS Terrapin, damaged by enemy depth charges and unable to submerge or make full speed. Cavalla stood by the damaged submarine and escorted her on the surface to Fremantle, arriving 27 May 1945.

Cavalla received the cease-fire order of 15 August while lifeguarding off Japan on her sixth war patrol. A few minutes later she was bombed by a Japanese plane that apparently had not yet received the same information, or heard the Gyokuon-hōsō. She joined the fleet units entering Tokyo Bay 31 August, remained for the signing of the surrender on 2 September, then departed the next day for New London, arriving 6 October 1945. She was placed out of commission in reserve there 16 March 1946.

Recommissioned 10 April 1951, Cavalla was assigned to Submarine Squadron 8 and engaged in various fleet exercises in the Caribbean and off Nova Scotia. She was placed out of commission 3 September 1952 and entered Electric Boat Co. yard for conversion to a hunter-killer submarine (reclassified SSK-244, 18 February 1953).

Cavalla was recommissioned 15 July 1953 and assigned to Submarine Squadron 10. Her new sonar made Cavalla valuable for experimentation, and she was transferred to Submarine Development Group 2 on 1 January 1954, to evaluate new weapons and equipment, and to participate in fleet exercises. She also cruised to European waters several times to take part in NATO exercises, and visited Norfolk, Va., for the International Naval Review (11–12 June 1957). On 15 August 1959, her classification reverted to SS-244.

In November, 1961, Cavalla was ordered to Puerto Rico and provided electrical power via umbilical connection to USS Thresher (SSN-593) which had suffered a diesel generator failure while the nuclear reactor was shut down. Cavalla successfully assisted Thresher's restart of her reactor.[7]

She was reclassified an Auxiliary Submarine AGSS-244 in July 1963. Cavalla was decommissioned and struck from the Naval Register, 30 December 1969.

On 21 January 1971, Cavalla was transferred to the Texas Submarine Veterans of World War II. She now resides at Seawolf Park on Pelican Island, just north of Galveston, Texas. Cavalla has undergone an extensive restoration process (see photos, below), and is open for self-guided tours. Among the early benefactors was then President of the Texas United States Submarine Veterans of World War II, Paul Francis Stolpman, and the former Texas secretary of state George Strake, Jr.[8] 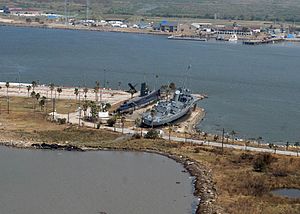